Transfer listed Aaron Mclean struck the only goal of the game for Peterborough to record their first points of 2010, despite a late surge of pressure from the away side who only had 9 men.

Jim Gannon, who was appointed last Monday night, decided to change the system and started the match with a 5-3-2 formation with wingbacks as Tom Williams came in at centre back, Tommy Rowe came in at left wing back and Charlie Lee was moved to centre midfield to partner Jake Livermore with George Boyd positioned in ‘the hole’ just behind the two strikers. Meanwhile, Rangers caretaker manager Mick Harford handed a first league start since April last year for winger Lee Cook whilst new loan signings Tomas Priskin and Marcus Bent partnered up front for their debuts.

With a new found optimism around the club, The Posh started the brightest and it didn’t take long for the deadlock to be broken. On 9 minutes, Posh’s front three linked up well with Mackail-Smith crossing the ball from the byline to George Boyd who used his silky skills to round defender Kaspar Gorkks and selflessly found Aaron Mclean unmarked to poke the ball home from 7 yards.

Despite some neat passing football from the home side, Peterborough couldn’t add to the goal tally with Chris Whelpdale firing over the bar with his left footed shot from just inside the area.

As the Posh players struggled to get to grips with the new formation defensively, Peter Ramage exposed some space behind the wingbacks and crossed for Marcus Bent who could only fire his header at Joe Lewis. Chris Whelpdale then had another chance but his shot was saved comfortably by Ikeme after cutting in from the right hand side.

The Hoops came close shortly afterwards with Faurlin, Priskin and Leigerwood moving the ball around nicely before the latter eventually having a low shot saved by Lewis. Matthew Connelly saw his weak header after a Lee Cook free kick fire over the posh goal on 33 minutes.

However, just before half time the home side were creating the chances again with Rowe glancing a header wide of Ikeme’s goal, whilst Boyd had a goal bound shot expertly blocked by former Arsenal man Matthew Connelly. The last action of the first half saw a stunning free kick from Tom Williams out on the left somehow evade everyone in the box with the goal gaping.

The Posh ended the half well and were unlucky to be only one up against a side clearly lacking in confidence which was highlighted by a simple error of being offside from a short corner.

Peterborough suffered a blow at half time as Charlie Lee had to be withdrawn due to injury with Josh Simpson replacing him in the middle of the park. Simpson was later booked.

After a slow start to the second half it was QPR who had the first good opportunity. On 56 minutes, after a long throw from Gorkks, Connelly had a shot superbly saved by Lewis who got down on the ball after the ball whistled through a crowd of players.

The key part of the game was on the hour mark when, after an over hit pass from teammate Faurlin, Mikele Leigertwood had to stretch to challenge to get the ball. However, the challenge turned into a two footed lunge on Tommy Rowe and Leigerwood quickly received his marching orders from referee Mr McDermid. 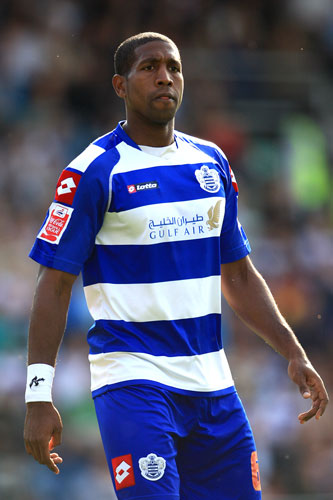 Being a man up, Posh were looking to put the game to bed but Ikeme denied a Mackail-Smith effort from the left side of the penalty area and Boyd scuffed an effort wide of the target shortly afterwards.

QPR should have been firmly out of the game on 82 minutes when they were reduced to 9 men when Ramage received his marching orders for a second bookable offense for a tackle, again, on Posh wide man Tommy Rowe. Izale Mcleod and Lee Frecklington replaced Mackail-Smith and George Boyd respectively on 83 minutes.

With two men extra, Peterborough were looking to control the game and nearly put the game beyond doubt when Aaron Mclean prodded a shot just wide of the Rangers goal after a perfect cross from Tommy Rowe.

QPR came back into the game on 85 minutes through a quick counter attack. The chance fell to Bent on the edge of the area but his effort was closer to leaving the ground rather than worrying Joe Lewis in the Posh goal.

The last five minutes was dominated by QPR pressure with Posh looking unable to control the game even with two men extra. Balls were being crossed into the box at an alarming rate, and with the posh fans desperate for the final whistle, the defence performed their job firmly. Joe Lewis in particular was doing anything possible to keep a clean sheet by pulling off two brilliant saves before substitute Hogan Ephraim blasted the Hoops last chance of the game high over the bar.

The full time whistle was greeted moments later with a huge cheer from the Posh faithful as they recorded a first win and clean sheet since December.

Jim Gannon will be happy with the performance but ultimately with the three points in his first game in charge as the Posh now may have a glimmer of hope of survival. It was ironic the ‘Great Escape’ music was playing after the full time whistle.

(Please note: We are unable to cover the forthcoming Coca Cola Championship match away at Cardiff)