It’s easy to forget that Theo Walcott is still only 21 as the Arsenal winger has been a household name for nearly four years now. However since his shock inclusion in England’s 2006 World Cup squad the former Southampton man has failed to reach the levels people hoped or even expected of him. Resultantly his place at this year tournament is far from secure.

The Walcott story began in August 2005 when at the tender age of just 16 years and 143 days he made his professional debut for Southampton. After four goals in 21 appearances the teenager was named among the top three finalists for the BBC Young Sports Personality of the Year. Unsurprisingly this attracted the attention of the Premier League’s leading lights and in January of 2006 he joined Arsenal for an initial fee of £5 million.

This astronomic rise to fame seemed to know no bounds as to the nation’s surprise Walcott was selected in the England squad to travel to Germany. The decision divided opinion with many questioning the wisdom in selecting a 17 year old with just half a season of Championship football under his belt. However this didn’t prevent the winger becoming the Three Lion’s Youngest ever player, making his debut in a friendly at the age of just 17 years and 75 days. Despite this Walcott would fail to make a single appearance as England crashed out in the quarter finals.

On the surface Walcott’s transfer to Arsenal was a match made in heaven. Under the tutelage of Arsene Wenger who has no qualms when it comes to trusting in youth, the Emirates would appear to be the wingers perfect destination. And there have been encouraging signs.  Providing an assist on his debut Walcott would then go on to score his first Arsenal goal in the 2007 League Cup final. A well taken brace against Birmingham City and a fantastic run and assist in the 2008 Champion’s League quarter final with Liverpool were further demonstrations of his capabilities.

However it is one night in Zagreb which stands out as the 21 year old’s towering achievement. Entrusted with a starting spot from Fabio Capello Walcott didn’t let the Italian down, scoring a devastating hat trick which secured an emphatic 4-1 win.  The winger was simply to hot for the Croatians to handle and the performance suggested he was ready to become a central figure for both club and country. 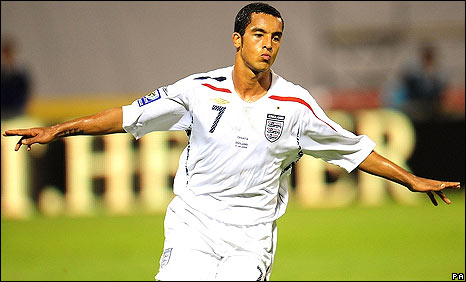 Yet despite this there is still an overwhelming feeling that Walcott hasn’t yet fulfilled his obvious potential. In four years at Arsenal he is yet to establish himself as a consistent starter, and one has to wonder why considering that Arsense Wenger is not shy when it comes to blooding young talent. Since Zagreb Theo’s international performances have been largely underwhelming. Most recently an ineffective display against Egypt provoked sharp criticism from Chris Waddle. The former international questioned whether Walcott’s game has really progressed since 2006, stating “I just don’t think he’s got a football brain and he’s going to have problems”. The former England star even went as far as to suggest that Zagreb was simply a one off.

Such criticisms bring the prospect of Walcott’s World Cup place into question.  Despite David Beckham’s injury there are still at least five candidates for a right wing spot and Walcott will need to respond to these criticisms if he is to make it to South Africa.  Many of Waddles comments focused on a comparison between Walcott and Wayne Rooney and this is a comparison from which the young winger has often suffered. After bursting on to the scene in similar fashion Walcott has yet to match the achievements of Rooney, who at the same age was already a key man for club and country. However such a comparison is somewhat unfair.  Few players are as naturally gifted as Rooney and expecting Walcott to immediately emulate the Manchester United star is a touch unrealistic.

Four years into his career and for Theo Walcott the jury is still very much out. There have certainly been encouraging signs but there have also been negatives in almost equal measure. Only Fabio Capello knows if the Arsenal winger will make it to South Africa, but even should he not it’s hardly the end of the world. We would do well to remember that Walcott is still only 21 and the pacey winger has plenty of time to become the star people expected.