Liverpool: Hillsborough, My End of Innocence 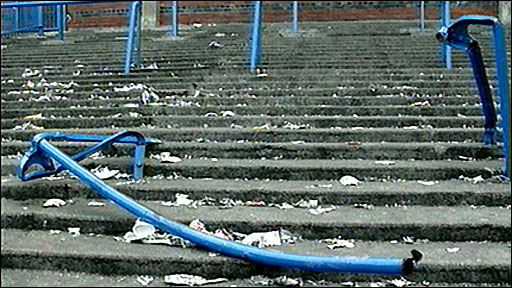 I’ve been reading Hillsborough The Truth by Phil Scraton. Truth is subjective and personal according a person’s agenda. Even in the Preface Phil Scraton says ‘I was determined that the disaster itself and the investigations which followed should be subjected to external, independent scrutiny.’ Scraton is an academic he is also a Liverpool supporter so can his truth be objective?

I was ten years old on 15th April 1989. In a novel that would make me an unreliable narrator of a story but I can only tell you the truth of what I saw that day.

I’d spent the morning colouring in scraps of paper that my mum had given me. I loved colouring and making things. Today I was making a banner to hang in my bedroom window. I coloured the scraps in red and white, which would normally have been a travesty in my family but today I had decided I was supporting the local team, today I was a Nottingham Forest fan.

As I hung the banner from my window I watched the cars pulling up and parking up and down the street as they would on any other match day. In the distance I could see the blue of the South Stand between the new leaves on the chestnut tree across the road and a sea of red walking down the street. A minibus pulled up on the junction of the road and out jumped a rabble of happy and vocal Liverpool fans. I can remember feeling disappointed because I’d made my banner and I hadn’t seen any Forest fans to wave it at.

When I went downstairs Des Lynam was on Grandstand. Des was always there on a Saturday in our house. Today was no exception, in fact Hillsborough was on the TV so the draw was all the more exciting. Between Des and the buzz on the street outside I remember being enthralled.

Now, my Nan always sits in the nosey chair. It’s the armchair that faces the TV but it is also in the bay window. If anything happens outside you can guarantee that Nannan knows about it first. At about 2.50pm I remember her saying quite openly ‘Look at this lot they’re going to be late’. About 10-15 Liverpool fans were walking down the road with a crates of lager in their arms, all of them with a can in hand. Pissed and loud. It’s a 15 minute walk to Hillsborough from my parents. She was right, they were going to be late.

It was 3pm now. Kick off had begun. Or so we had assumed.

The next thing I remember was Des saying ‘we’re getting news from Hillsborough’ and then the footage coming onto the TV. There were people on the pitch and no one seemed to know why. I could tell from my parents faces that whatever it was there wasn’t going to be any FA cup football today.

An ambulance drove onto the pitch and Dad went outside.

The news was coming through that people were dying. We could see the ground from where we were and they were saying people were dead. I don’t think I fully comprehended what that meant until later that day. I’m not sure I really understood what death was.

Over the next hour or so people started to make their way back to their cars but the happy vocal fans were now silent and weeping. They were like zombies, not knowing what to do with themselves. The overriding image of that day will always be my dad out on the street bringing people into our house making them cups of tea and getting them to contact their families. It’s amazing the mundane things you remember. I remember we had burgundy push button phone in the dining room and there was almost a constant queue to use it.

In the family we have an enormous steel teapot that’s used for family celebrations. My mum had taken it down from the top of the kitchen cupboards and was making tea for around 30 Liverpool fans who were now sitting in the living room watching the events unfolding only a mile down the road.

I’d never seen a man crying before that day. I’d also never heard my dad swear. In one five minute period I saw and heard both. Standing at the bottom of the path my dad was talking to people and ushering them into the house to get a drink when a man wearing stonewash jeans and jacket, across the road just fell to his knees in the gutter. My dad ran across the road to bring him into the house. The man almost howled as he wept. He just wanted to be left alone. He was almost fighting with my dad, shouting at him to ‘fuck off’ and leave him alone. But he didn’t leave him alone I heard my dad say ‘get in that fucking house and call your family because somebody out there thinks you’re dead.’ The man just looked at him and cried. Dad brought him up the stairs and into the house. I remember talking to him the garden as he drank a cup of tea. He was a nice man but he was broken.

Now every stereotypical image of a Scouser is the curly perm and tache but I really did meet a Liverpool fan like that on that day. He was tall and rotund. I could see his belly peeping out from under his Red Liverpool shirt. We were in the garden and I was listening to conversations and delivering cups of tea. I’d heard other Liverpool fans saying how many people there were in such a small space. So when I took the Scouse stereotype his tea I felt knowledgeable enough to join in the conversation.

I gave him the mug and said in my most confident voice ‘They should have let the Liverpool fans have the Kop because you’ve got more fans.’ He looked down at me and then back to his friend and said to him ‘Out of the mouth of babes.’

Remember the mini bus that pulled up on the street when I was hanging my Forest banner? Now they were all sitting in the living room watching the TV. All except for one. One of their group was missing. His name was Billy. In between other people calling home the members of the mini bus were calling all the hospitals and anyone they could think of to try and find him.

As the death toll began to to rise everyone was thinking but not saying that Billy may be gone.

After what felt like hours but it couldn’t have been more than two a massive scream of voices came from the living room but they were screams of relief. Billy was being interviewed on Calendar in the hospital. He’d broken his leg and was describing to the reporter what he had seen. It was the first time since they climbed out of the minibus earlier that day that I had seen them smile.

In the days and weeks after my parents received a lot of cards from the families of the Liverpool fans. We even received one from Billy’s family. The card read ‘Strangers are friends that we haven’t yet met.’ The lads from the mini bus also came back and brought my mum flowers the next time Liverpool played at Hillsborough.

If mobile phones had existed I would never have had this experience. Our plastic burgundy phone was a life line that day and the source of comfort for many families.

I don’t remember when the house emptied but I know it was dark. My Nan had decided to stay the night so I was sleeping on a camp bed in my brother’s room that night. It was very late when my dad came upstairs and I was still awake. He peered through the banister and asked me if I was ok. I wasn’t sure but I knew I was safe and were others out there who weren’t. Suddenly things felt different.

So there you have it. I have my opinions now as an adult of what I think happened at Hillsborough that day and about the justice campaign. My opinions probably wouldn’t be welcome or listened to by some but this is my truth of what I saw and heard. Nothing more and nothing less.