Manchester United: Red Devils fended off Fulham to secure their first victory of the season

Despite rescinding his wage demands, Nani could not avoid the axe as Sir Alex made five changes from the side that played were battered at Goodison Park. Rafael came back at right back as Valencia and Ashley Young flanked Cleverley and Anderson. Van Persie made his home debut for United alongside Kagawa but it was Wayne Rooney who made way.  Fulham retained their 5-star team last week only to see Riise missed out with Briggs his replacement as they hope to snatch a win at Old Trafford for the first time in 9 years.

It was perhaps not unrealistic as Duff stunned the Old Trafford crowd with his first-time shot inside the box in the 3rd minute but not long after a sublime volley from Van Persie heralded a Red Devil domination as they ended the half 3-1 thanks to another debut goal from Kagawa and Rafael. The goals may not be as nicely engineered as the crowd had hoped but the domination was encouraging as United passed the ball around patiently as Kagawa continued to impress and the Cleverley-Anderson combination seemed to reproduce their promising form early season last year. Martin Jol, however, stuck with his lineup and confidence as he made no changes going into the 2nd half. As United slacked, the match became more evenly contested.

De Gea’s misjudgement of a near-post cross led to a Vidic own goal and Fulham continued to pile on pressure whereas United struggled in the rain to threaten Schwarzer. The introduction of Rooney for Kagawa meant the leading-scorer striker partners were to play together but it did little to turn the match around again as Dembele – once a United target – dazzled around and troubled Ferguson’s men until the last minute as his cross met Ruiz’s head only for De Gea’s reflex punch to keep it out in Fulham’s last play of the game. 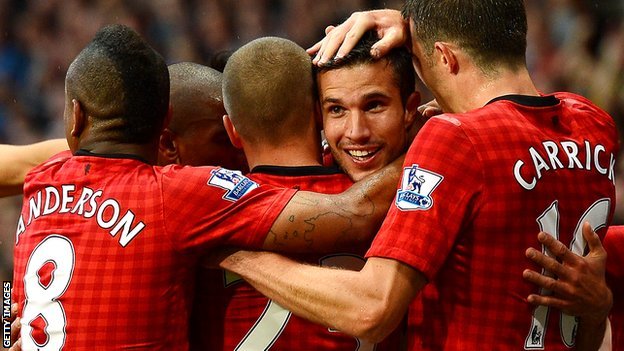 The 3 points were what United needed but Martin Jol would be the happier manager of the two as his team, despite a bit of complacency showed in the early stage of the match,  they recovered quickly after the break and put on a fearless display in one of the most difficult away stadia to play in. Ferguson will be satisfied with his central midfield’s performance which combined work rate with creative penetration but remains in search of his best partnership from the 4 strikers; although Rooney’s injury may make it a slightly easier task for now.

Man of the match: Moussa Dembele. His first half performance may not have warranted the credit but his energy and creativity in the 2nd half definitely shadowed the rest. Cleverley and Anderson couldn’t do much more to halt the Belgian in midfield as his strength and technique was apparently at another level. Amongst various efforts, his thunderous swerve shot finger-tipped away came closest to bringing the match level and Sir Alex may be contemplating a late move for the forward-turned midfielder before September.

Flop of the match: Damien Duff. Grabbing his 2nd goal in as many games, it seems to be a perfect start of the season for the veteran winger – on paper. Besides the early goal, the former Chelsea and Blackburn man was next to anonymous in the 90 minutes. He rarely threatened the weary Evra and offered little at the back to subdue Ashley Young – who was equally disappointing in attack for United.

What if Rodallega started the match? Mladen Petric did well to trouble United’s centrebacks and was involved in Vidic’s own goal, separating De Gea and the ball. Yet if Martin Jol was confident enough to retain an offensive lineup at Old Trafford, he might well have started Rodallega. The Columbian has proved himself as a pacey and clinical striker who free-roams a lot. With Vidic nowhere near his peak form and Carrick hesitant, perhaps Rodallega’s unpredictability could better link with Dembele and Ruiz’s little flicks to trouble United.