Messi and Ronaldo: A breed of their own

Leo Messi bagged himself yet another hat-trick this weekend against Atletico Madrid while Ronaldo followed suit with a magician’s performance of his own. It had been a rather slow start to the campaign for both Barca and Real, but they need not worry. Each can boast that of course besides having a host of top class players amongst them, not to mention both having world class managers, both teams hold arguably the greatest player in the world. I say arguably because the argument does stand, is it Messi or Ronaldo? However, fans of either club need not be jealous of one another, because regardless of who is better, these two are certainly the out and out best players in world football. 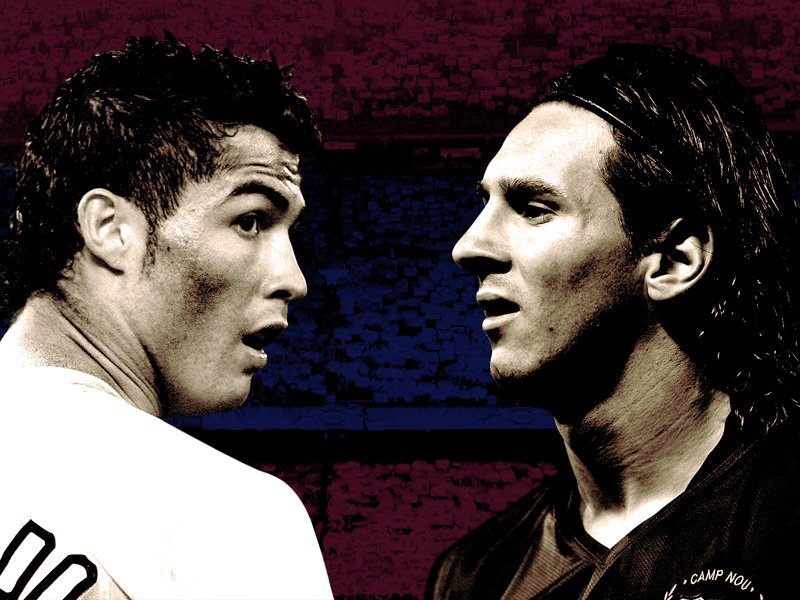 I think it is fair to say a lot of English football fans only take an interest in La Liga because of Messi and Ronaldo. While we sit on Sunday evenings over a pint with our mates and bitch and moan after another bad result for our own team, we argue over a poor refereeing decision or another horror show from Torres in the big derby and in general, we are pretty negative in our views on what happened in our own backyard over the weekend. But the conversation will often end with a positive – ‘Oh did you see Ronaldo/Messi’s goal last night? Absolutely unbelievable’.

Ronaldo and Messi are undoubtedly unique players. We all hear the legendary stories of Best and Maradona from years gone by and we will most definitely be telling stories about Leo and Cristiano in years to come. How many years have these two now been proving their greatness? In the past 4 seasons, no player in football has been as consistent in maintaining such a level of brilliance. Looking at the English game, Gerrard has been invaluable to Liverpool, Torres, a joy to watch, Lampard consistently excellent, Giggs, a great servant to his club and of course Wayne Rooney, fan favourite over at Old Trafford. One thing is for sure; each of these aforementioned players can raise their game to the level of Messi and Ronaldo. But they cannot hold it there. Ronaldo stats for Madrid read that number of games played is in fact below goals scored. Messi scored 53 goals last season alone. These two don’t break records, they tear them apart. Their attributes are obvious for all of us to see; Messi’s skill, Ronaldo’s pace, Messi’s delicate side footed finishes, Ronaldo’s thunderbolt strikes. But their footballing ability comes so naturally that they are separate to most other footballers.

What impressed me so much about Ronaldo was his ability to transfer his talent effortlessly from England to Spain. With an 80 million pound price tag, the pressure on him to perform was massive. And he did. His ego has been questioned time and time again; he shouldn’t give a damn, that ego of his ensures he has belief, confidence and acts like the best player in the world. As for the more humble Messi, let’s hope some day in his best years, he comes to the Premier League. Unfortunately it seems, there is only one club that could ever afford him. But as brilliant as he is and surely he would be brilliant in the Premier League too, it would be fascinating to see how he would adapt to the English game. And prove he can do what he does on any stage.

Think of an ‘on form’ world dream team right now and Messi and Ronaldo would be 2 of the 1st names on the team sheet. You would probably throw in Rooney, Aguero, Silva and Suarez too. Try it again in a year and Messi and Ronaldo will still be there, try it again in 3 years and they should still be there. Kaka, a brilliant talent, won the World Player of the Year award in 2007. Since then, Messi and Ronaldo have stolen the show. At the moment, there are a lot of contenders to take over the crown. But none who have been so consistently magnificent and brilliant in recent years of football.

Football will bring us much pain, FA cup final losses, relegations, derby losses, but the brilliance these two give us will ease the pain somewhat, the Kings of the beautiful game.

Tevez saga boils over at the Allianz Arena
Why is there such hate for Manchester City?