Manchester United has been historically the expert in excelling through the Christmas congested fixtures, but last year’s collapse in the league has alerted Sir Alex Ferguson to ensure his team is fired up to maintain a comfortable margin above Manchester City. Captain Nemanja Vidic finally returned to the starting lineup in this tough away fixture at Swansea, to replace the injured Rio Ferdinand.

Swansea started positively with enormous confidence and they put Manchester United on the back foot. The in-form Michu showed determination in challenging Nemanja Vidic, who is yet back to his best after the long layoff from injury. The defence, led by Ashley Williams, was bolstered by the dynamic frontline and did not have much trouble early on in containing the luxurious striker pair Robin Van Persie and Wayne Rooney.

Manchester United had been the second best team, but they showed the quality of a champion. Michel Vorm managed to keep Ashley Young’s low shot away, but poor set piece defending allowed Patrice Evra to grab his third league goal of the season. 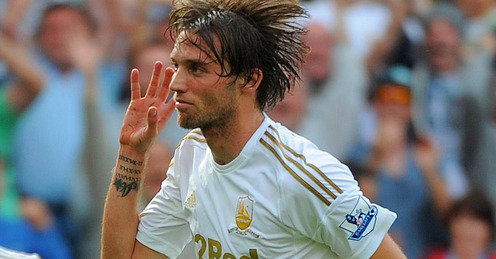 Despite conceding a goal unconvincingly, Swansea continued to show the character which saw them surprise the Premier League last season under Brendan Rodgers. Routledge and Dyer provided the pace while De Guzman and Leon Britton distorted the defence with timely runs and accurate passing – something United had been lacking for the whole match. Shortly after Evra’s goal, De Guzman found a gap in United’s defence and was left one-on-one with De Gea, but Michu was judged to have block Evans on his route to challenge De Guzman.

A very soft foul and poor officiating ruined a golden chance for Swansea, but Routledge and De Guzman manufactured a rapid counter attack to allow Michu to claim the rebound off De Gea and levelled the match. De Gea could have done better in handling De Guzman’s shot, but it was their complacency in possession that first sparked Swansea’s attack. Swansea was fuelled by Michu’s leveller and cheering from home crowd to push for the go-ahead goal before half time. De Guzman dispossessed Cleverley near the byline and nearly made it 2-1 with a shot towards the near post. Nathan Dyer also threatened with a wide open attempt just outside the box.

In contrast to the desire shown by the home team, the Red Devils were careless and sluggish. While Swansea focused on the defence in the final third, Michael Carrick was given acres of space to boss the midfield. However, he received limited help from his teammates. Robin Van Persie was often outmuscled and even outpaced by Ashley Williams, while Ashley Young never committed to arriving in the box to connect for crosses. Meanwhile, the absence of Rafael weakened the threat from the right flank. His replacement, Phil Jones, continued his disappointing form and was only a destructive unit in attack. Rooney’s inability to pass accurately after the interval made Sir Alex’s side looked increasingly unlikely to claim the victory in Wales.

Poor passes and slow decisions saw United fail to punish Swansea’s carelessness on numerous occasions. Van Persie did come close but the upright denied his magnificent left foot volley. Desperation in Ferguson’s mind drove him to take off Valencia and sent on Chicharito, but the lack of width together with Rooney’s poor form could not see an effective return in Sir Alex’s change. Swansea looked slightly exhausted after a great first half. Ki Sung-Yeung and Luke Moore were lifted from the bench to restore some energy on the field.

A match of high intensity entered its climax in the last ten minutes. Ashley Williams’s ruthless clearance inflicted a heated argument between him and Van Persie after a freekick was awarded. Momentarily after Rooney hit his last kick of the game onto Swansea’s wall, Carrick’s header was denied by Vorm and the upright. Ryan Giggs impressed in his ten minutes of action and showed he is a better left wing than a central midfielder, despite his age. He released Evra on the left, but efforts from Chicharito and Ashley Young were blocked respectively by Ashley Williams and Ben Davies.

Manchester United can only kick themselves for ruining numerous opportunities in the second half, but the Swans have to be credited for their brave fights in the last half an hour of the match, despite looking extremely exhausted after a brilliant first half display. Swansea sit at the bottom half of the table but is only six points away from fourth place, with Manchester United entering Christmas holding a four-point lead.

Why Manchester City’s resilience might just win them the title
It’s only Non-League but I like it: blog 5- Hereford United getting by with a little help from their fans.