Celtics nervy start to the campaign seems a distant memory. Much of the credit must go to youngsters such as Victor Wanyma and James Forrest, the pair have shown maturity beyond their years, managing to consistently perform when more experience players languished.

With the ship seemingly steadied and the squad reenergised (even Majstorovic is begging to resembles a centre half) the key to building on our vital win against Hearts and maintaining our winning run will be the ‘steel’ in the centre of the park. It seems the dam which was once our defence has been patched (but for how long) giving the team, and the manager some much needed breathing space.

With the ‘old firm’ brewing in the back of everyone minds, and the league campaign firmly back on track, I feel that we can look reassuringly to the centre of midfield to now do the job it’s suppose to. Give us energy, get in people’s faces and fight for every inch of ground on the hallowed turf of Celtic park.

Players such as Kayal, Brown and Wanyama will surely be able to safe guard the defence while offering themselves in attack, a strong, forceful central power in the team will also allow those out wide, such as Samaras and Forrest extra scope to drive forward, or in the case of Samaras meander, supplying the forwards with goal scoring opportunities. 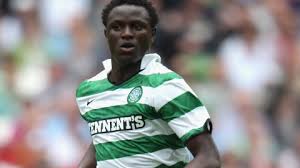 There is a genuine solid feel to the style of Kayal and Victor, they are different to Brown, who is more vocal and petulant, sometimes spilling over into unnecessary bookings etc. They are 100% tacklers; Kayal will keep the ball ticking over all day in midfield, with everyone around him drawing from his intensity and range of passing. Wanyama has the ability to sit and play the break up role while pick passes himself. They are more silent in their performance but with the added bite and strength that is required to fill the role.

A central pairing of Brown and Kayal, in midfield with Wanyama lying deeper at centre back sounds the best option in order to inject a hard, battling mentality to the core of the team. Something that resembles the character of Lennon himself and traits we all expect to see in any player who wears the green.

If Celtic can keep all three fit and on form, these central enforcers will be imperative in the race for the title and could make all the difference in the many crunch games the SPL throws up.

Celtic: Faithful through & through?
What a two months!