A Nail Biting Finish To The End Of The League One Season.

League One is a league growing in reputation; with the likes of Leeds, Norwich, Southampton and Charlton it possesses a set of ‘fallen giants’. The difference in the size of clubs between the ones battling for promotion and fighting against relegation is, perhaps, the vastest in any division in English football. Whilst Leeds and Norwich, the two clubs currently occupying the automatic promotion spaces, regularly see more than 20,000 supporters flock into their home ground on matchdays whereas some of the clubs at the ‘wrong’ end of the table are lucky to see more than a quarter of that amount at their home games.

It seems that it will be four of seven teams that will go down. With the table currently looking like this:

Stockport are the first club to be mathmatically relegated following a season of turbulence. With the club coming precariously close to being wound up, like Chester City, their main aim was to stay in business and in that sense Gary Ablett, who has had a very tough task to achieve anything at Stockport, has been a success. This still hasn’t stop rumours of Jim Gannon, a legend at Edgeley Park, taking over from Ablett for the clubs League Two season next campaign.

Wycombe look set to join Stockport in League Two as the ‘Chairboys’ are currently  6 points away from safety. Their 3-0 win over Tranmere has given the Wycombe fans some hopes of the ‘great escape’ though. ‘Wanderers’ play Gillingham on the final day of the season and have Leyton Orient in their final four fixtures meaning they are still in with a fighting chance of staying up if they can beat their other relegation rivals.

Southend are another club in financial crisis that look set to drop into the lowest tier of English league football. After facing financial problems the club had to sell Lee Barnard, their prized asset, to Southampton to raise some much needed funds. Like Stockport, the clubs main objective this season was just to remain a football team, so the campaign, in that sense, can be regarded as a successful one. 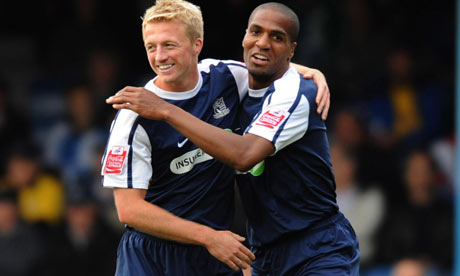 Tranmere can go level on points with Gillingham if they win their game in hand. They face Exeter at the weekend it what can definitely be called a ‘six pointer’ as both sides battle against the drop. ‘Rovers’ problems can be pin-pointed down to their awful start to the season under John Barnes but after Les Parry was appointed as manager things seem to take be on the up for the Prenton Park faithful but three losses in a row have put Tranmere in real trouble.

Gillingham’s season has proved that ‘the home is where the heart is’. ‘The Gills’ would be outsiders for the play-offs if only home form was taken into account but a terrible away record has cost them dear. They have picked up just 6 points on the road in 21 games and are still looking for an away win – a team that hasn’t won away all season has always been relegated before – but Gillingham will be looking to buck the trend. Simeon Jackson has been their main threat this season; the highly rated Canadian striker has scored 14 goals and will need to add to this record to ensure that his club can stay in the division for another year.

After fears sunk in that Leyton Orient could be relegated the board acted quickly sacking Geraint Williams and appointing Russell Slade in one last bid to keep the London based club in the division. Four points and three games later and it seems that their decision, albeit a little harsh, was justified, especially after an excellent 2-1 victory over league leaders Norwich in their most recent fixture. They are not out of the battle yet though and will have to maintain this sort of form to be certain of another season at League One level.

Exeter City are the final club that still look nervously over their shoulders; they are only 5 points away from the dreaded drop zone. The club looked destined to go down at the end of February but a remarkable 9 game unbeaten run has propelled ‘The Grecians’ up the table and out of the relegation spots. Despite having to be wary one more win should seal their safety and there is now a quiet optimism around the club but a loss to Tranmere at the weekend and Exeter will be dragged back into the fight again.

With the table very close at the bottom it is likely that the divisions relegated, and indeed promoted clubs, will not be finalised until the last day of the season. It is likely to be a nerve-wracking end to the season for fans of all the clubs mentioned above with League Two being a much less exciting proposition than another campaign at this level. With every game a six-pointer from now on in it is effectively a four game season for all involved in the relegation scrap.

PFA Players’ Player of the Year Award, The Nominees.
Mariners’ Ship Sinking Closer To The Conference, Quakers Sunk And The Rest Floating On The Surface