The Olympic contenders part I: Brazil

The post euro depression set in pretty rapidly after Spain’s mauling of the Italians, yet we can’t overlook this years Olympics which potentially could prove just as exciting as the Euros. At the very least it bridges the gap to everyone’s favourite game of the year The Community Shield and than a return to normality with our beloved Premiership. Spain are already been thrown around as the favourites as they will likely be for anything involving a ball for the next 30 years, other nations are fielding strong teams and Spain will not have a walkover here. Perhaps because its close to home, or at home if your a Londoner, that this Olympic football tournament seems to be garnering more attention than it’s predecessors, it also features Great Britains first appearance in the tournament since 1972. Team GB should be considered contenders, home field advantage and the support of D-Becks from the stands on their should be enough to get them out of the group stages. This edition will look at who I believe will the eventual winners of the tournament Brazil.

Brazil for all their accolades have never won the Olympic tournament, they finished with the Bronze in 2008 after losing 3-0 to their loving rivals Argentina. While Spain are most bookies favourites, Brazil are getting good odds too with Paddy Power (yes i had to choose the stereotypical Irish Bookies) giving them the favourites tag at 15/8. After the disappointing 2010 world cup Brazillian football has been a rebuilding phase. The reigns have been handed to their young guns many of them still playing in their native league.

Some names are more recognizable than others Alexandre Pato, Neymar and Hulk particularly eye-catching. Of course anyone with the name Hulk would grab your attention. This squad does not deviate all that much from their usual squad with the emphasis in recent been focused on their youth, from what i have read many Brazilian’s have extreme confidence in their young players and consider this current batch to potentially be a Golden Generation. This crop of players have a lot to prove also, Brazilian’s are a proud and passionate nation when it comes to their football so they ought to be a bit miffed at all the attention Spain are getting. Their flat and uninspiring World Cup performance in 2010 was the last time they were on the global stage, the Olympics is this new prospective golden generation’s chance to announce their arrival to the world, and also start building momentum for the 2014 World Cup.

When asked about his views on Brazil’s squad, Barcelona and Brazillian legend Romario delivered a golden soundbyte ‘It’s shit.” he followed by exclaiming  “Nothing against the over-23’s who were selected, but this should have gone to players who are more experienced,’. When Romario isn’t over exaggerating his goal tally just like us men over exaggerate our sexual conquests (Seriously it’s 1000 women, no joke, two of them were models as well) he is given audacious and controversial quotes to reporters. While i should respect the opinion of such a decorated player i think its laughable that anyone would consider this squad anything other than brilliant. Three overage players he is referring to are Thiago Silva, who is widely regarded as quite a cracking player, Hulk whose muscles justify the name, also a cracking player and Marcelo, has some great moments not too sound defensively but buckets of experience I wouldn’t be surprised if Romario recommended Rivaldo, Roberto Carlos and Jarzinho instead, actually he would probably recommend himself thrice just for good measure.

The rest of the squad isn’t too shabby either, plenty of exhilarating young talent that will be fresh to most viewers, also a few names we know from the Premier League such as Sandro, Tottenhams resident hardman and Rafael of Manchester United who on his day actually looks quite good, if only it was his day more often. A lot of the players are unproven at the highest level with most of them coming from the Brazilian league but its a team of highly regarded and promising young stars. The Olympics isn’t really the highest level but it is a good showcase for many of these young players and with such strong competition this tournament a lot of European scouts will be watching closely as to gauge prospective players. Without further delay here are three players you should look out for.

The Players to watch: 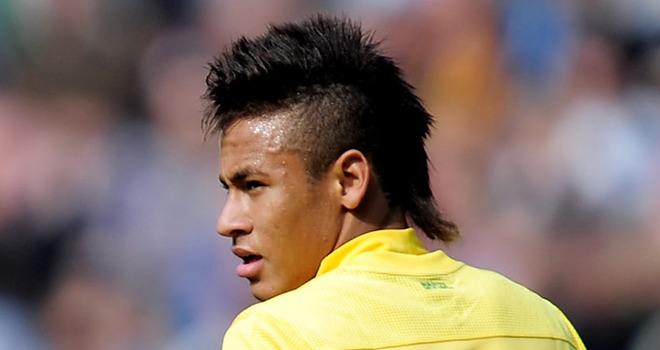 I wanted to comment on something other than the hair, its a cliche at this point but…THE HAIR

You have probably have witnessed at least one of Neymar’s great goals on a Youtube compilation entitled “OMG BEST GOALS EVER!!”. He has arguably the best highlight reel of any modern day footballer, which is impressive for a 20 year old. If you have not witnessed him, I would strongly recommend checking him out on the youtube. You can’t encapsulate his greatest moments in five minutes, but it’s a good introduction. Pundits, fans and ex-pros all view his potential as been on a Messi/Ronaldo level; at least Pele does, who refuses to call Messi the best player in the world until Neymar matures. Strong praise indeed, but is it justified or is it just hype?

The moniker of “The new Pele” has been thrown around in the past. It’s easy to over hype young Brazilian talent when all we see are clips and highlights. Flashy skill can be deceiving and tricks can divert attention away from flaws in one’s game. So is Neymar just a murky legend that in two years will be in the “Where are they now pile” along with Kleberson and other flash in the pans? I can honestly put my hand on my heart, swear on Jim Morrisons grave and give my most honest of opinion and say no. I can also do a cartwheel but that is irrelevant. Yes, he is flashy, and attempts plenty of tricks; a couple may fail, but more often than not, he pulls it off. On top of his masterful ball control, he has great balance, a wicked shot, breathtaking pace and a knack for goalscoring as 41 goals in 86 games for Santos and 9 in 18 for Brazil prove. Neymar is not afraid to drop deep into his own half to pick up the ball and then proceed to cause havoc. His dribbling and drive give defenders nightmares and his passing can be overlooked but it is excellent. He draws defenders in, allowing his team-mates to break free. With great skill comes the assumption of been greedy, and while Neymar will always have a go at defenders, he has plenty of assists and can play a lovely through ball. I would be looking at Neymar to perhaps be the player of this tournament, at the very least anyone who watches the Olympics should come away remembering his name. As kids, it’s players like Neymar who really grasp our attention: he is a bundle of excitement, skill and will undoubtedly be a star. This tournament could be the next milestone in what will be a glittering career. Let’s just pray the kids don’t start copying his hairstyle.

He doesn’t actually look like a goose, i don’t get it…

Ganso, as he is affectionately nicknamed, translates to Goose, Pato translates to Duck: what is this crazy trend? I can’t imagine geese being particularly good at football, but young Paulo Henrique Chagas de Lima certainly is. Let’s call him Ganso for convenience’s sake though. The attacking midfielder is club teammates with Neymar and together the bear most of their country’s expectations. Justifiable as the two have shown electrifying chemistry for Santos. Ganso also shares a similar mystique to as we have yet to see him in a big tournament or playing regularly in Europe. At 22 Ganso has already matured into a fine attacking midfielder, he excels at creating and is a young master of the pass. His vision and his ability to deliver a killer ball  has brought comparisons to Kaka and not the Kaka of the last 2 years who can usually be found on Madrid’s bench. His ball control is exemplary and his ability to twist and turn allows him to create space in congested midfields. He has an imposing frame as well and at six foot can compete in the air, physicality is often overlooked when it comes to flair players but his strength and size allow him to hold off defenders. Aside from his great creative skills he also has an eye for goal. He is yet to open his account for Brazil but has scored a few tasty goals for Santos and at youth level, he can shoot from range and also can make a run from deep to finish a move he started. A lot of pressure will be on this young mans shoulders come the Olympics but he appears to have strong character and is regarded as a consummate professional. Strong personality mixed with his impressive range of skills and physical attributes indicate Ganso could emerge a huge star from this tournament. To make things even more interesting he has reportadly turned down a new contract as Santos meaning a transfer to Europe appears on the cards, the Milan giants are both heavily linked, as are a whole host of Premier League clubs and the big two in Spain. A good tournament and surely we will be seeing much more of Ganso in the near future.

Although he is unlikely to start for Brazil i had to include Lucas Moura. The first time i saw Lucas Moura dribble was like watching a sped up video of one of those fifa fanatics who play for ten hours a day. He is truly mesmerizing with the ball at his feet, he can run directly  at full tilt using quick stepovers and pure pace to best defenders. He also has the ability to slow the ball down, read the defenders body language and produce a unique and outrageous trick, words don’t do this young mans ability justice. At only 19 it is scary to think how good he could be when he fully matures, but for now we can enjoy the naivety to his play that ensures he will away try the ridiculous and the sublime.

I don’t usually like to link Youtube highlight videos because of their awful accompanying music and poor editing however words really can’t describe this young mans skill, also this video appears to have no audio so choose your own beats. I would recommend “Don’t You Forget About Me” by Simple Minds, twice due to the videos 8.41 length and the song clocking in at a handy 4.20 giving you 1 second to click play again.

So why do i rate them so highly? Other than flair, skill and pace in abundance a lot of these players just seem magical. They have a manager they seem to like in Mano Menezes which is always a good start. Alexandre Pato has been in good form under the current gaffer and I would consider him for the golden boot. It could be a daft or romantic assumption but this Brazilian team look and play a lot more Brazil than we have seen since Rivaldo, Ronaldo and Ronaldinho were terrorizing defenses. A lot of them are unproven but many are touted for great things aand this tournament is a chance to show us Europeans that we are fools for doubting whether they can “cut it in the big leagues”. A dream match up with Spain could be on the cards in the Semis, could it be a precursor to the World Cup Final 2014? I am getting far too ahead of myself, but one thing i am assured of is that this Brazilian team will not disappoint.