One pundit on MUTV was reported as saying Burnley’s victory over Manchester United on Tuesday was ‘nothing but a total fluke’. I hope he’s hungry, because on this showing, there will be a lot of humble pie on his plate come the end of the season. Yes, Everton were poor, once again, but you can only beat what’s infront of you.

Despite their fantastic start to the season, Owen Coyle will not be getting carried away, ala Phil Brown and Hull – even if the Turfmoor faithful are quietly ambitious in their season’s hopes. For David Moyes, whilst this was nowhere near as painful an experience as their opening-day humiliation, it still exposed gaping holes in in their current squad. You can only hope that Everton will benefit from the sale of Joleon Lescott, both in terms of money and squad harmony.

The tone for Everton’s day was set within the first minute. Lethargic ball-watching almost cost Moyes dearly, as Chris McCann weaved past Leighton Baines before putting in a hanging cross, but Martin Paterson’s header crashed into the crossbar. Steven Fletcher was first to the rebound, and his goalbound effort drew a low save from Tim Howard. The Claret fans roared, whilst Everton seemed nervous, tense almost. Once again the delinquent McCann waltzed through and in turn found Paterson, but the nippy striker missed the target. David Moyes appeared to be as uncomfortable as Dean Windass in lycra, and rightly so.

It took thirty minutes for Everton’s first meaningful shot on goal, but Brian Jensen was perfectly positioned to save Jack Rodwell’s weak header. Tony Hibbert’s low cross just evaded Louis Saha at the near post, whilst Rodwell was off target once more. Everton looked to be settling in, and it was Coyle who was getting agitated.

Cue the curse of the commentator. A dangerous cross by Robbie Blake fizzed across the face of the goal, but Steven Fletcher managed to keep the ball in play before teeing up Wade Ellliot, who exquisitely curled the ball into the top corner, albeit via a deflection off Phil Neville’s boot. Only those who were witnessing can describe the aptitude ringing around Turfmoor, electric. 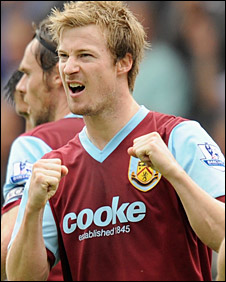 Wade Elliott celebrates his first goal of the season

After the break, with Moyes’ ‘words of wisdom’ still echoing throughout their minds, Everton’s attacking intent was clear to see. But intent is no good unless chances are created, and Burnley’s rugged style easily nullified any thoughts of an Everton equaliser. The quick-thinking McCann saw his attempted lob tipped clear by Howard, before Blake nearly emulated his goal in midweek with a sizzling volley that dragged wide.

And it looked like Burnley’s chances would come back to bite them on the derrierre when referee Phil Dowd awarded them a disputed penalty with just fifteen minutes left. When Tony Hibbert blazed through the Burnley defence, McCann pulled out of a tackle, perhaps in fear of fouling Hibbert, but when Hibbert fell over his own foot  tumbled over, Dowd was convinced there was contact, thus awarding Everton a penalty. Normally, whenever Jensen makes a save, the crowd roar his nickname, ‘Beast’. However, when Louis Saha stepped up confidently, there was no need for chanting, as the Frenchman pulled his shot wide of the post.

Saha almost made amends for his miss with a rasping thirty-yarder, but Jensen watched the ball sail wide in relief. Everton boss Moyes said, ‘Burnley were the better side in the opening 25 minutes. I think, with the confidence they gained from the game in midweek, we expected that. But after that I thought we got back into it and were a bit unfortunate not to get something out of it.’