Four problems that are stopping Tottenham from reaching top four

A derby loss is more than just a loss. To lose by a hefty score from a leading position makes it hurt even more. Tottenham fans may argue they were the winning side when head counts were still equal for both teams, but Andre Villa-Boas has wider issues than temperament to resolve to re-establish their stance at a challenger for the Champions League berth.

The retirement of Ledley King has not left Tottenham short-handed in the centreback position, but the Yids have been struggling to find a replacement to the influential leader. Tottenham has not been once buckled under pressure this season and conceded late goals to gift away victories. When Adebayor was sent off, the absence of the outspoken character under crisis cost them dearly. By the time AVB had the chance to restore the team order, Tottenham already had left themselves with the task of overcoming a two goals deficit with a man down. 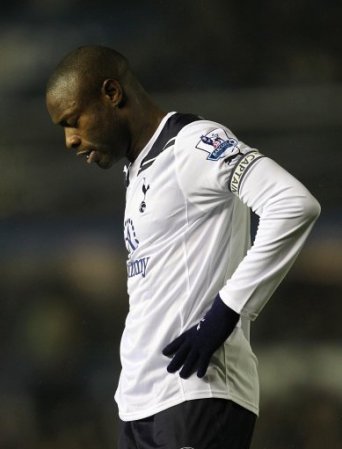 Ideally, William Gallas is capable of providing the much needed leadership to Spurs. This might well be the sole value of keeping the aging centreback in the starting XI. It is obvious, though, that the Frenchman failed to deliver once again  on Saturday. He was never the source of confidence and stability at the heart of defence. What made worse was the display of a lack of interest to play approaching the end of the match, something you do not expect to see from your captain. In contrast, Michael Dawson had been more than spiritual joining the game half way through. At his peak, Gallas may be a fitter centreback than Dawson, but it is growingly obvious that he has become the defensive liability. Fans will be hoping it is not long until the loyal Dawson re-emerges as the first-choice captain again.

It would be impossible to judge whether employing a 4-4-2 at Emirates Stadium was a sensible option now, but this does show Tottenham’s versatility in tactics. No matter they are playing one or two strikers, it is important that they maximise their capabilities. The match against NK Maribor was a perfect demonstration in utilising their strength in the passing range and width of midfield, but seldom can they maintain the consistency throughout a match and often find themselves losing the balance of attack. How well can AVB address this problem with the team could be the key in avoiding unnecessary points-dropping and bagging a top four spot.

4. Lack of self belief

This is one of the main reasons why Tottenham completely collapsed and lost out to Arsenal in the Champions League race last season. Although recording some victories over their rivals in the last few seasons, the lack of historical success leaves the players struggle to self-convince of their capabilities to be the winner. When Mancity was pouring the attack in Etihad Stadium, Tottenham looked no different to the QPR side who involved in the dramatic title-deciding game last season. The departures of Van der Vaart and Modric do not help either, as neither Sigurdsson, Dembele nor Dempsey has equivalent achievement in top flight football. More than an inspirational speech is needed to anchor the players’ confidence and belief in their own capabilities. This will be a stern test to AVB on his ability to exert positive influence and get the most out of the players.

Were Chelsea Right To Sack Di Matteo?
Time for Chelsea’s Torres to deliver