Rangers vs Celtic – The Preview

Its that time again.  We face our old foes for the seventh time this season this coming Easter Sunday at Ibrox.  Rangers have two wins, Celtic have three, with one draw.  The defending champions sit top of the league a single point ahead of Celtic, with the visitors having a game in hand.

The 34th game of the Scottish Premier League season is sure to be an explosive one, pardon the pun.  It has been in the news this week that letter bombs were addressed to Neil Lennon, Paul McBride QC (Celtic’s unofficial spokesman) and former MSP Trish Godman (who wore a Hoops top on her last day in the Scottish Parliament), and that the police are investigating.  It adds to the ill-feeling already surrounding the game after the massive kerfuffle over nothing after the March 2nd derby which involved the Government, police and clubs holding a summit on how to tackle the “Old Firm” problem, and the extremely intense (and unfair in my opinion) spotlight on what the Rangers support sing.

You need to remember these factors above are only the cherry on the icing of the Glaswegian cake, with a massive footballing rivalry of two clubs in the same city, a shared dominance of trophies in Scotland for decades and a deep-rooted sectarian problem in Northern Ireland and the west of Scotland being the base.  But we should be focusing on what really matters; the on-field events.  Football is a sport, not a political or religious excuse to gain votes or members to your church.  Nor is it an excuse for alcohol abuse or violence on the streets.

Okay, so FOOTBALL now.  The reason I go and watch football in the flesh and at home on television.

Rangers have the chance to go four points clear with a win, knowing that Celtic have a slightly tougher run-in.  It is a must-win for the Gers considering Celtic are two points ahead if they win their game in hand at Inverness Caledonian Thistle.  Walter Smith has seen his team keep clean sheets and get wins away from home in the last five games at St Mirren, St. Johnstone, Hamilton, Aberdeen and Dundee United.  He could not have asked for a better reaction from his players after the 3-0 embarassment in the last SPL game against Celtic, the game which kick started that run of results.

But the game on Sunday is a home one and Rangers have had some poor results at home this term.  A 3-0 reverse at home to Hibernian in October was followed by a 2-0 defeat to Celtic in January and a 3-2 loss to Dundee United a few weeks ago, with a draw to Caley coming earlier in the season.

Meanwhile, Celtic have won every game across two competitions except the League Cup Final since the surprise 2-0 defeat to Stuart McCall’s Motherwell.  Their last two games have seen Aberdeen and Kilmarnock both put to the sword to the tune of four goals to zero.  For Celtic, Sunday’s cruch Old Firm derby would see them go one clear of Rangers at the top with a game in hand and surely stop Rangers from getting three-in-a-row. 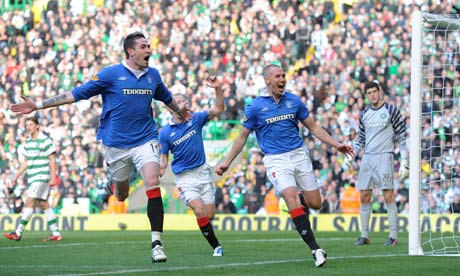 Both teams went in to the tussle with 100% records having won the first eight games of the season but Rangers emerged with the record intact.  Gary Hooper gave the home side the lead on the stroke of half-time from the back post, but a resolute Rangers came back to win 3-1 with a Glenn Loovens own goal and a Kenny Miller brace which included a fine volley and a controversial penalty. On the 40th anniversary of the Ibrox Disaster, Rangers just did not turn up.  A dull first half was followed by a nervy second until Samaras lached onto a through ball and rounded Allan McGregor, and then slotted away a penalty.  It put Celtic top of the league by one point, with the Gers having two in hand.

A thumping wonder goal from youngster Jamie Ness gave Rangers an early lead in this Cup tie, before Kris Commons scored on his Old Firm debut to equalise.  Steven Naismith was brought down for a penalty which resulted in Celtic keeper Fraser Forster being sent off and Steven Whittaker firing home for 2-1.  Celtic controlled the second half and Scott Brown’s curling shot made it 2-2 before Naismith received his second yellow this time for diving.

Celtic thumped their arch rivals in this encounter with Gary Hooper earning a brace and Kris Commons firing in for a 3-0 win.  Rangers didn’t have much in the way if chances and on the day Celtic were too strong. Hooper’s turn of pace beat Davie Weir for the first, and a dfensive mistake allowed Izaguirre to burst down the left and cross for the waiting Hooper and 2-0.  Common’s swerving shot beat McGregor for 3-0.

Marc Wilson’s awkward looking shot was enough for Celtic to progress to the quarter finals.  In a game which saw a lot of incidents and flare-ups, Rangers produced a better performance this time but still not nearly enough to get something from the game.  Whittaker, Bougherra and Diouf all received red cards and Ally McCoist and Neil Lennon had a square-up on the touchline at full-time.

Steven Davis opened the scoring for Rangers in the first half, before Joe Ledley’s header levelled it.  The game went into extra time and Rangers got the goal they deserved in the 98th minute when a lovely Vladimir Weiss through ball came to Nikica Jelavic who placed past Forster.  The ball hit off the post with some amount of spin, carried along the line for a few yards and into the other side of the net to send the Rangers end into raptures.

Easter Sunday’s game is set to be an enthralling, explosive, end-to-end derby with the winner of the game looking big favourites to win the Scottish championship.  Watch it be 0-0 now.