Real Madrid have long had a glorious (some might say notorious) record in the transfer market, and their participation in this year’s window looks set to be their must illustrious ever. In this article I will look at the players who could be joining the world’s most famous club, as well as taking a look at the players who could be waving goodbye to Madrid. But first…

Where do they get all their money from?

It’s a fair question. Real Madrid hold the top three transfer records (for Zidane, Kaka and Ronaldo respectively) and seem to be sitting on a bottomless pot of money. So just how do they do it. Well, there are three main steps which see Real’s profits dwarf those of nearly every other clubs, and they are: Kaka will hope to regain the world player of the year award at Madrid.

Real Madrid announced the signing of Kaka on the 9th of June, spending just over £56 000 000 million for the Brazilian maestro, breaking the world transfer record in the process. The 27 year old playmaker has long been rumoured to have been leaving cash-strapped AC Milan, for either Real or newly found billionaires Manchester City. However Kaka revealed that he was only ever going to leave AC Milan for Real Madrid, and that the thought of joining Man. City never even crossed his mind.

THEY SAY: “He has been signed because of what he can produce on the field and for the dressing room influence he will have on this new pack of galacticos.”(BBC South American correspondent Tim Vickery).

HE SAYS: “It’s an important project for me to continue growing in my career. The president is already making contact with potential signings and is putting together a competitive team, one which will try to once again become champions in Spain and Europe.”

The Fans view: Largely positive. Once voted FIFA’s world player of the year, Kaka’s form has tailed off slightly but there’s no doubt that he remains one of the world’s greatest playmakers. There has been a few whispers circulating around the Bernebau that too much was paid for Kaka but, if he delivers, the £56 million they paid for him will look a snip.

Just days after breaking the world transfer record for Kaka, Real looked set to break it again as they had an £80 million bid for Manchester United’s Cristiano Ronaldo accepted. The winger has been in blistering from for United over the last two seasons, and has not kept his desire to join Real secret. A horde of controversy has surrounded Ronaldo’s courtship with Real, leading Sir Alex Ferguson to declare that “he wouldn’t even sell that lot a virus.”

THEY SAY: “The signing of the century” (Spanish newspaper Marca). “The hair-gel industry in north-west England suffered a catastrophic blow on Thursday.” (The U.S. newspaper the Los Angeles Times).

HE SAYS: “It’s flattering when two of the top teams in the world want you to play for them. Now I can look forward to Real Madrid and a new stage in my career. I learned of the deal here in LA and heard from my people that United had accepted.”

THE FANS VIEW: Ronaldo has all but joined Real, and the fans are ecstatic. There’s no doubt that Ronaldo is the man that everyone loves to hate but if he’s playing for your team…the United fans are sad to see him go even after all of his tantrums and pouting, and that says something.

Will Tevez stay in Manchester? Or will he move to Madrid?

A number of clubs are chasing the Argentine striker, Real Madrid among them. Tevez scored 19 goals in a two year spell for Manchester United, as well as scoring 7 goals for West Ham as he single handily saved them from relegation. Manchester City are reportedly the favourites in signing the striker, but Real, Chelsea, Liverpool and Tottenham could all offer around £25 million for his services.

THEY SAY: “He is the Argentine prophet for the 21st century”. (Argentina head coach and legend Diego Maradona).

HE SAYS: “I know that I am not going to continue at Manchester United.”

THE FANS VIEW: Ronaldo is likely to play in a similar role for Real as he did for United- just behind a lone striker- and Tevez would be the perfect partner for him. The two have experience playing together and the tenacious Tevez would allow Ronaldo to flourish in an attacking role. The Real fans appreciate slick football, hence their delight at the Ronaldo signing, and a few fans have raised fears that Tevez doesn’t fit into their “beautiful football” philosophy. 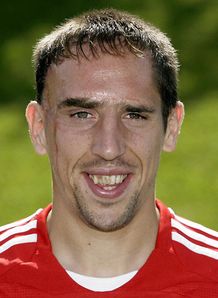 Ribery might be one of the best players in the world, but with a face like that, you wouldn’t want to meet him in a dark alley.

Franck Ribery has established himself as one of the best footballers in the world whilst playing in Germany, but longs to play for a “bigger” club in a “bigger” league. Not so long ago, Real were favourites for his signature, but apparently the Madrid board were put off by BayernMunich’s high valuation, giving both Chelsea and Barcelona hopes of signing the Frenchman.

THEY SAY: “I am all for Ribery joining Madrid and I will do everything to make it possible.” (Real’s sporting advisor and legend Zinedine Zidane).

HE SAYS: “It is rapidly becoming more difficult for me to stay in Germany”.

THE FANS VIEW: The Real faithful have urged the board to sign Ribery and, if the transfer goes ahead, the signing would complete Real’s illustrious midfield quintuple of Diarra, Kaka, Ronaldo and Ribery.

Maxwell would be a solid addition to the Real squad.

The left back position has the potential to be troublesome for Real this season; Heinze looks set to move back to England and Sergio Ramos is better deployed at right back. Thus, Real could swoop for Inter’s Maxwell. The Brazilian’s frosty relationship with Inter boss Jose Mourinho hasn’t improved significantly, and Maxwell looks set to transfer to either AC Milan, Real or Manchester City.

THEY SAY: “I would say that there are many possibilities that Maxwell will leave the team.” (Mino Raiola, Maxwell’s agent).

HE SAYS: “I cannot see myself at Inter for much longer”.

THE FANS VIEW: Maxwell’s potential move, whilst not as exciting as that of Kaka’s and Ronaldo’s, would still be seen as a shrewd bit of business. £7 million looks to be a bargain also.

ARJEN ROBBEN
STATUS: REAL AREN’T AVERSE TO LETTING HIM GO. THE BOARD APPARANTLY TOLD HIM TO LEAVE OTHERWISE HE WOULD “ROT IN THE RESERVES”.
VALUE: £30 000 000
POSITION: WINGER

Many would be dissapointed to see Robben leave.

Despite his quality, Robben has been told he has no future at Madrid, with his position now occupied by either Ronaldo, Kaka or, potentially, Ribery. Tottenham were quick to declare an interest, but the player is understood to want Champions League football.

THEY SAY: “I’m willing to bet a bottle of wine that Robben will not go there (Tottenham).” -2 days later:- “Things do change overnight, Real have made it clear that Arjen has little future in Madrid.” (Robben Snr. Arjen’s father).

HE SAYS: “It could be difficult” (referring to staying at Real).

THE FANS VIEW: Many would be very disappointed if Robben did leave. He remains a quality player and a fan’s favourite. 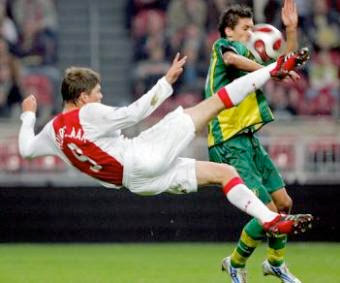 If Huntelaar is to suceed at a new club, he must stop scissor kicking people in the head.

Huntelaar was signed by Real not so long ago, and has scored 8 times in 20 games. However, many expected Huntelaar to play better, and there are fears that he doesn’t possess the quality to occupy a Real Madrid starting position.

THEY SAY: “In the penalty box, he is the best player in the world, bar none.” (Louis van Gaal)

HE SAYS: “I want to make as success of myself. I hope that I can do that whilst in Madrid.”

THE FANS VIEW: There wouldn’t be too much disappointment if Huntelaar left, many fans don’t feel he is good enough to play for Madrid and would take £13 million for him.

The Dutch forward has one of the best goal scoring records in the history of the modern game- 62 goals in 67 games for PSV, 95 goals in 150 games for Manchester United and 45 goals in 67 games for Real. However, Real see his age (he turns 33 on the 1st July) a major problem and don’t see him as an important player come the 2009/2010 season. Tottenham could snap him up for just under £1 million, but his wage demands could jeopardise a deal.

THEY SAY: “Madrid have got a pure centre-forward once more, a specialist in scoring goals”. (Marca on Van Nistelrooy after he joined the club).

HE SAYS: “Tottenahm are a big club, and any player who has the chance to join them should listen.”

THE FANS VIEW: Ruud is a popular player, like Arjen, but few see him as one of Real’s key players and, if Tevez did join Real, it’s almost certain that Van Nistelrooy would never start a big Real game again.

Real Madrid have suffered in the Spanish League and in the Champions League in recent seasons but, this year that could be about to change. Take a look at the team Real could field next year:

The defence looks solid, if unspectacular (but when has the defence ever been Madrid’s strong point?). Maxwell and Sergio Ramos are both good players and Pepe and Metzelder are both imposing centre backs. The midfield is arguably one of the strongest in the world, Diarra has blossomed in Spain and in Ribery, Ronaldo and Kaka, Madrid could play the three ebst players in the world. Providing they could sign him, Tevez would also be an excellent addition- playing just in front of Ronaldo.

So, overall, this summer’s transfer market looks set to be one of the best ever for Real Madrid. They have splashed the cash in signing Kaka and Ronaldo and could still sign Tevez, Maxwell and Ribery. Many expect the new Real team to be the next dominant force, finally about to embark on a decent Champions League win and ready to take the La Liga title from Barcelona. It looks like Madrid is about to witness the second coming of the Galacticos…