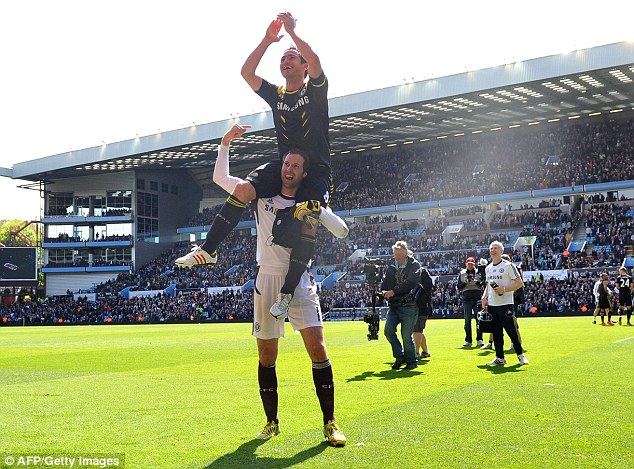 A match of equal importance to both teams, although far apart in the league table, Christian Benteke could have washed away their 0-8 memory at Stamford Bridge to pay tribute to the brave Stiliyan Petrov and ensured their survival, but Frank Lampard was destined to be the star of the afternoon by breaking Chelsea’s all-time goals record with a brace and securing Champions League football in Stamford Bridge next season.

Travelling to Amsterdam in a few days time, Rafa Benitez had to go for rotation to give some breathing space for his players, who were playing their 67th game of the season. While the away fans were cheering for the return of the two legendary figures, Frank Lampard and John Terry, it was a big gambling decision with Benteke, Weimann and Agbonlahor on the other side.

Nevertheless, it was the younger side of Chelsea defence being defeated by Aston Villa’s signature counter attack. Weimann’s under-lapping run distracted Azpilicueta and left Benteke to take on Gary Cahill alone. Cahill was on his backfoot and exposed the near post to Benteke, who skilfully guided his shot past the near post. Peter Cech could be prompted for better positioning, but the pace of the attack and footwork of Benteke had surely caught him out.

The young Belgian has already showed this season his all-rounded ability as a centre forward. As strong as a beast, though with touch as soft as silk, it is fair to tip Benteke to be one of the most successful strikers in Premier League.

Temperament, though, would be a key to his development. Two elbowing towards Azpilicueta in the first half could have easily seen him sent off. A similar move to that of Nani against Real Madrid in the second half forced Lee Mason to eject Benteke. He must understand no matter how good he is, he must first be able to stay on the pitch. 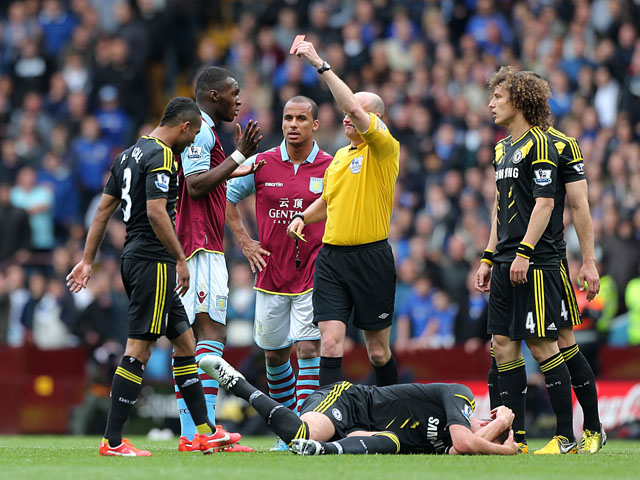 This is something Ramires still struggled to master as well. His high boot did not catch directly into Agbonlahor’s chest. However, already been booked for a dangerous tackle, together with the reaction from the crowd, Lee Mason did not give Ramires a second chance to redeem himself.

Early goal boasted the confidence of Aston Villa. Should Fabien Delph catch his shot slightly better, Chelsea could be in deeper trouble before the interval. In fact, they would count themselves very lucky to escape the first half with 10 men. Yacouba Sylla dispossessed Ramires and went clear through towards Peter Cech. John Terry cynically tripped Sylla and if not of Ashley Cole’s quick recovery of position, the clear path foul would have seen the captain heading for an early bath.

Veteran at the back looked unconvincing, but the one in attack just delivers. Villa lost a bit of rhythm after Benteke’s sent off. Chelsea did not let the chance slip and Lampard scored a thundering left foot shot for the Blues. Brad Guzan had already brilliantly denied Lampard’s freekick in the first half, but this time, experience had got the better of youth.

However, Chelsea could not pour on the pressure and allowed Villa to re-establish. Agbonlahor, Delph and Sylla all tried to find the go-ahead goal but just found themselves short of quality in their finishing touches. Meanwhile, the Blues retained more possession, but poor passing, in particular David Luiz, who came in after half time, denied them from creating any opportunities for Demba Ba.

Villa looks vulnerable in corner defence throughout the season. Gary Cahill, former Astion Villa player, nearly punished them for allowing him to chest down a corner with ease. Nathan Baker brushed Cahill’s shot with his arm, and Demba Ba’s tap might need the help of goal line technology to determine the call. It would be harsh to criticise the officials for the no-call decision, but all credits to Sylla and Westwood for the last ditch blocks on the goal-line.

With John Terry stretched off following the goal-line dispute, there was a lengthy injury time . Frank Lampard sealed the deal just before the clock turned 90th minute. A one-two released Eden Hazard in the box and Lampard tapped in to become the highest goalscorer of Chelsea’s history. Also locking the Champions League berth, no wonder the fans could not constraint from celebrating with the legend on the field.