Report: Virgil van Dijk could be out for the rest of the season 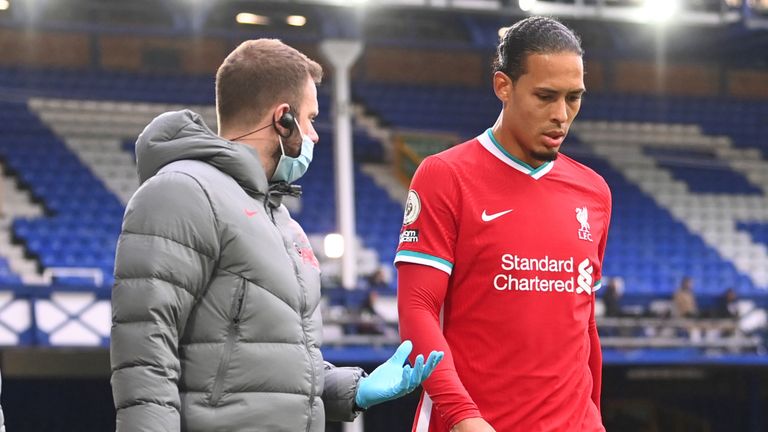 According to reports, Virgil van Dijk ‘could be out for the rest of the SEASON after suffering an anterior cruciate ligament injury in his knee after a horror challenge from Jordan Pickford’ in the Reds’ Merseyside derby draw at Everton earlier today.

Although the challenge from the Everton goalkeeper went unpunished by the referee and VAR during the match which ended in 2-2 draw, the injury will be a bitter blow to Liverpool’s Premier League title defence.

According to beIN Sports, the Dutchman could be out for the rest of the year and that will be a huge concern for Jurgen Klopp’s side who are aiming to win back the title this season.

Presenter Richard Keys said: “The information we are receiving is that he’s done his anterior cruciate ligament and if that is the case – well I say he’s done, with the incident with Jordan Pickford – and he will miss seven to eight months if that is the case.”

It was, however, reported that following the game Van Dijk was taken to the hospital for a scan on his knee along with new signing Thiago.

The former Bayern Munich midfielder who made his first start since joining the Reds was on the wrong end of a challenge from Richarlison was sent off for the poor tackle.

“In the game, it was pretty quick. For me, it was a clear penalty what I saw and then obviously we saw that the flag went up, so offside.

“I still thought it’s worth to have a look on the foul but that didn’t happen.

“We have no power there, we just sit here and now you discuss it with me.

“We have to ask other people about that.

“What can I say? I don’t want to say Jordan Pickford wanted to do it but it’s, of course, not a challenge how a goalie can do it in the box because there’s another player.

‘Lampard has no tactics’ – Fans react after Chelsea 3-3 draw at home to Southampton
Everton 2-2 Liverpool: Jurgen Klopp explains why it’s the ‘best away derby’ in five years