Determination is beyond doubt for both Bayern Munich and Barcelona. Early exit of former champion Chelsea makes both teams as tournament favourites, who were beaten by the tactical excellence of the Blues last year. Bayern shows devastating dominance in Bundesliga, but were pushed to the cliff edge by Arsenal in the Champions League knockout stage. On the other hand, hit by injuries of players and even coach, Barcelona’s level of performance is clearly sinking, regardless of their healthy lead in La Liga.

Being under the spotlight for the last five years, the formula to beat Barcelona becomes more and more obvious, in particular with the continuous absence of plan B in the Catalans tactics book. Only a handful of teams execute it to perfection though, let alone sustaining for 180 minutes. Chelsea provided the textbook example last season. Jupp Heynckes certainly has not overlooked Di Matteo’s hard work. 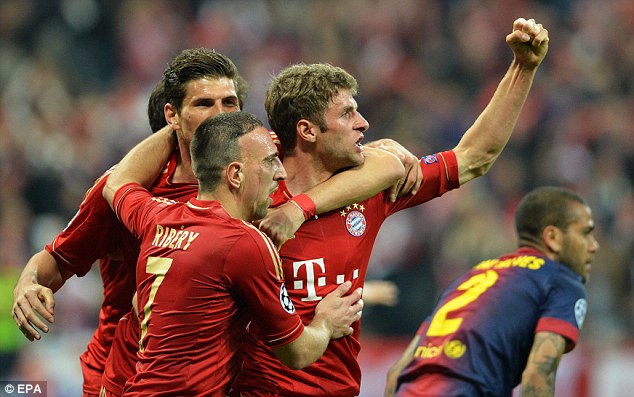 Focusing on stopping Lionel Messi is never the most effective strategy. It might be close to a goal created every three times the ball reaches Messi near the box. Blocking the supply to the four time Ballon d’Or winner is the key to victory, while the main suppliers are the other two Ballon d’Or candidates, Xavi and Iniesta.

Losing Toni Kroos may not be Bayern’s disadvantage in this matchup. Javi Martinez, Thomas Muller and captain Bastian Schweinsteiger showed outstanding tactical discipline in a near to man-marking formation to contain Xavi and Iniesta. Man-marking is not as easy as it sounds in a football pitch, but Javi Martinez had absolutely frozen Iniesta, while Xavi barely had more than three seconds with a clear view of his teammates.

More importantly, Messi was forced to drop deep in order to help link up plays. As a result, the threat of the Barca’s leading goalscorer was hugely undermined.

Schweinsteiger was sensational in a night which Bayern defeated Barcelona with an exceptional team effort. Performing his usual duty in orchestrating the attack as an anchorman between the centre backs, Schweinsteiger also did not give away much room to Xavi in Barca’s defensive half. It was an inspiring performance by the German international. Joachim Low would have hoped Schweinsteiger had done the same to Andrea Pirlo last year in the European Championship.

Deficiency in height is an unsolved problem in Barcelona. Absence of Carles Puyol and Javier Mascherano forced Marc Bartra on the big stage. Together with Gerard Pique and Sergio Busquets, they were still two men short to fend off giants Dante, Jerome Boateng, Javi Martinez, Thomas Muller and Mario Gomez. The first two Bayern goals have said it all. 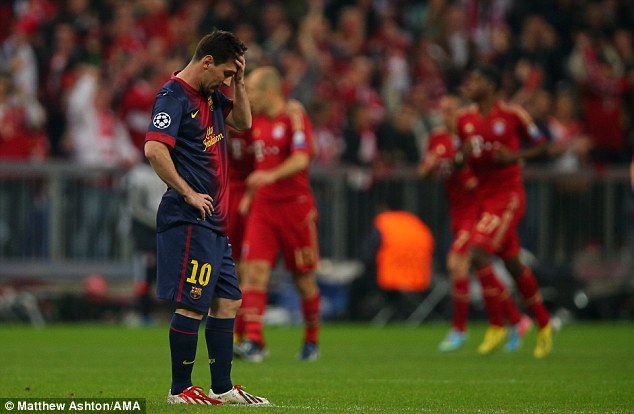 It does not mean Barcelona has no way back in the second leg, although the scoreline suggests so. The most vulnerable moment of Bayern’s defence comes in counter attack, before the fortress of midfield is formed. Normally the pace of Alexis, Pedro and Messi should be more than capable to stir any type of defence, but Barca’s indulgence in passing only means they never quite hit the top gear in attack.

Gomez might be offside in the second goal, and Thomas Muller could have given an illegal pick inin the build up to Robben’s goal should this be a basketball match. All in all, Barcelona was outperformed by a confident, consistent and brilliant German side. It was probably quite a one-sided match and a well-deserved victory for Bayern. They kept the celebration subtle and now they have to keep their heads cool. It is only half way through and there is 90 minutes to go before they can march to Wembley for the final.