Silvestre would be ready to join Bordeaux 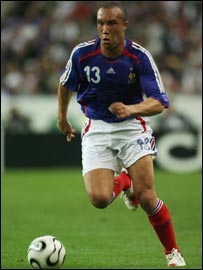 Manchester United defender Mikael Silvestre said that he is open to a move to French club Bordeaux. The defender is 30 years old, and he is a fringe player at Manchester United. After the long injury he suffered this season almost certainly put him out of the European Championships’ French squad, it seems that Mikael would be ready to seek first-team football elsewhere, hoping that he would make the French squad for the next World Cup.

With the strong defensive partnership between Ferdinand and Vidic going even stronger, it is unlikely that Silvestre will get regular first team football at the Red Devils next season. Silvestre said that he has family members living in the region of Bordeaux and that he supported Girondins de Bordeaux when he was young. However, he is not ready to accept to wage decrease in order to join the club.

“It isn’t impossible. Bordeaux is a club which is close to my heart. When I was little, I followed their exploits in Europe. Moreover, I have family in the Gironde region.”

“But each player has to be satisfied in a sporting sense as well as financially. There are no gifts handed out here. I am not a good Samaritan.” – Mikael Silvestre