Spurs Target; James Forrest of Celtic – Who is he?

James Forrest was born on the 7 July 1991 in Prestwick in Scotland. Forrest played for South Ayr Boys Club when he was younger, and consistently shone at every level. He was scouted by Celtic’s talent spotter for Aryshire, Jim Began, at the age of 11. Other clubs interested at the time were Kilmarnock, Ayr Rovers and Rangers. He signed youth terms with Celtic at the age of 13, where he joined the Celtic coaching school in Hamilton.

In his youth he was a very talented tennis player. He was consistently approached by Prestwick Tennis Club but turned them down to concentrate on his football career. He was described by coaches at the club as being a naturally talented player, who could just “pick up a racket and play” 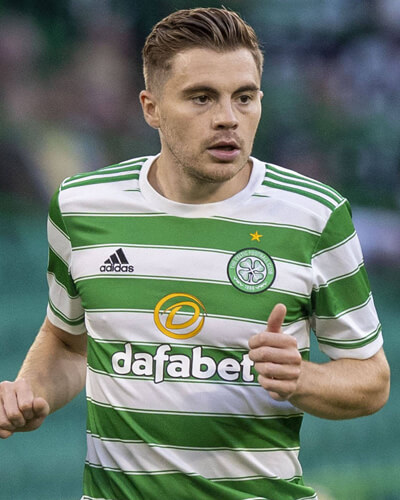 Forrest had always excelled at Celtic, with a match program from 2004 singling him out for exceptional performances in the Under-13 squad. He then made his first team debut for Celtic on 1 May 2010, coming on as a late substitute against Motherwell. He scored six minutes after his arrival to the game, to make it 3-0,before Robbie Keane added another.

He made his first European appearance for the club in a Champions League qualifying game against Braga in July 2010. A few days later he won the man of the match award for his performance in the Emirates Cup game with Olympique Lyonnais. He continued this fine form into the league campaign, scoring against St Mirren in a 4-0 victory. Forrest was named the SPL Young Player of the Month for August 2010 On 28 January 2011, Forrest was rewarded for his form with a new five-year deal at Celtic.

In August 2011, Scott Brown said that Forrest was the best player to come out of the Celtic youth academy since Aiden McGeady.Forrest’s performances in the month of September saw him win SPL Young Player of the Month. In Celtic’s Scottish League Cup quarter final tie with Hibernian on 26 October, Forrest was credited with a match winning performance. Celtic went in at the break 1-0 down but Forrest was instrumental in reigniting the tie after half-time, with two early goals. On 31 October, Premier League club Tottenham Hotspur’s chief scout Ian Broomfield was reported to have watched Forrest in action. Tottenham manager Harry Redknapp later confirmed this was true and that he believed Forrest to be a good player. However, he also said that at that stage he had not considered making a bid for Forrest. In early November, the Scottish Football Associations new Dutch performance director Mark Wotte, who helped start the careers of players like Robin van Persie, Arjen Robben and Wesley Sneijder, said that he sees Forrest as being “the light in the darkness” of Scottish football. He said that if more players like Forrest are produced then the Scotland national football team will be able to match the performance of countries like Uruguay, who got to the 2010 World Cup semi-final and at the time were fourth in the FIFA World Rankings despite having a population smaller than Scotland’s. Forrest won the SPL Young Player of the Month award for November, his second of the season. In January 2012, Forrest was listed by FIFA as one of the top 13 young players in world football

Forrest has been capped for Scotland at U16 and U19 level. He made his Scotland under 19 debut on 20 October 2008 in a European Championship qualifier against Azerbaijan.

Following his fine club form at the start of the 2010-11 season, Forrest was called into the Scotland U21 side. On 7 September, he came off the bench for Scotland U21s and assisted in the 89th minute for Chris Maguire to score the winning goal against Austria. On May 17 2011, Forrest was selected in Craig Levein’s Scotland senior team to face Wales and Republic of Ireland in the Carling Nations Cup. He made his full international debut on 29 May in the match against the Republic of Ireland. Forrest then came on as a substitute in Scotland’s 2-1 win over Denmark on 10 August.

Although his favoured position is on the right wing, he can also play on the left or as a striker.

Forrest has explosive pace and also exceptional ball control and dribbling skills. This gives him the capability of beating his man and going down the wing, or coming inside and beating several players. His manager, Neil Lennon, has said how over his first few seasons at Celtic he has been able to extend the distance of his explosive runs from 15 or 20 yards up to 30 or 40 yards. Forrest is also a very good finisher and, although predominantly right footed, equally capable with both feet, some of the less natural aspects of his game are his passing and football intelligence. However, Lennon believes that these areas of his game are quickly improving. Forrest has great fitness levels and is generally able to keep playing at a very high intensity throughout the whole of a match. He is a very enthusiastic player who has incredible hunger and desire for the game and shows great bravery and vision in his play. Rangers winger, and regular Scotland under-21 team mate, Gregg Wylde described him as being the kind of player who never hides from his responsibility during a match.

Although he has been compared to former Celtic player Aiden McGeady, he is generally seen as being much more direct. He is more often compared to the old fashioned variety of Scottish wingers like Jimmy Johnstone, of Celtic, or Willie Henderson, of Rangers. Former Celtic legend Bertie Auld described him as being the kind of player who ‘puts bums in seats’ and then has the technical ability to “lift bums off the seats once the game starts”.

I will be happy to answer any questions on any footballing topic, follow me on twitter @seandineen2

Paddy McCourt on his way out of Celtic?
Bleak times ahead for ‘unattractive’ clubs.