‘Posh’ boss Gary Johnson named five new players in the starting 11 who were making their debut, including Kelvin Langmead, Seth Nana, Nath Mendez-Laing, James Wesolowski and newly named captain Grant McCann. Other recent signings were on the bench including Arron Davies, Lee Tomlin and ‘keeper Steve Collis. Ryan Bennett came in at centre half in place of the injured Gabriel Zakuani whilst, at the other end of the pitch, Aaron McLean and Craig Mackail-Smith partnered each other up front to produce the famous Mac Attack.

‘Gashead’ Manager Paul Trollope included summer signings James Tunnicliffe, Gary Sawyer and Will Hoskins in his starting line up. They all made their league debuts for the club, while Wayne Brown and Mikkel Andersen, who also signed during the close season from Leicester City and Reading respectively, also start. Byron Anthony started at right back; therefore there was no place in the side for midfielder Chris Lines, who started the match on the bench and new signing Will Hoskins was to begin the game upfront with the pacey and dangerous striker Jo Kuffour.

Opening day had finally arrived at London Road Stadium and the usual pre season expectations, excitement, optimism and pressure was clear to see as ‘The Posh’ begun their charge on the League 1 title. The opposition, Bristol Rovers, was another cause for optimism as ‘The Posh’ hammered Rovers on the opening day of the 2006/2007 season 4-1. ‘The Posh’ faithful were expecting a repeat performance.

It was a lively start to proceedings in the sunshine as Danny Coles was booked for Bristol Rovers after just 3 minutes after a rough challenge on ‘Posh’ number 12, Mackail-Smith. Although any clear cut chances were sparse in the early stages, Nath Mendez-Laing was showing his potential by running at his marker down the right hand side before producing a tempting cross into the opposition box, only for Tunnicliffe to head clear for the visitors.

The first reasonable chance of the match fell to ‘Boro’ striker Aaron McLean on 8 minutes, but the former Grays man fired the opportunity wide of the target from 8 yards. In reply, former ‘Posh’ player Jeff Hughes, who scored against Peterborough in the last meeting between the sides at London Road, headed wide of Joe Lewis’s goal from a Dom Blizzard cross.

Mendez-Laing, who was preferred to Arron Davies, was again showing he was a threat down the right flank as he made an explosive burst into the Rovers box only to be thwarted by an excellent tackle from Gary Sawyer as the visitors appeared to be very well organised and hard to break down.

Peterborough were finding their feet and were on the attack again as a good interchange of passes between full back Mark Little and Mendez-Laing eventually opened up for Craig Mackail-Smith on 26 minutes, but the front man fired over with his weaker left foot despite being well placed.

Both teams were trying to play football in the right way and the game was beginning to flow as Will Hoskins had a good chance for Rovers after being played through by Jo Kuffour, but Joe Lewis was equal to the effort getting down low to smother the ball. Moments later McLean and Boyd tried their luck from distance, but Anderson in the Bristol goal saved comfortably.

With ten minutes remaining in the first half it was Bristol Rovers who were on top. Despite their dominance, both Hughes and Kuffour squandered golden opportunities. On 36 minutes, Rovers caught the ‘Posh’ on the break and a cross field ball from Kuffour deflected off centre half Ryan Bennett into the path of Jeff Hughes who, despite having bundles of time, shot straight at the advancing Joe Lewis who pushed the ball away with his legs. Just two minutes later, Bristol were again knocking at the Peterborough goal as Jo Kuffour was played through accidently by a misplaced back header by Bennett but pressure from Langmead and the advancing Joe Lewis meant the former Bournemouth favourite fired wide of the goal. His protests of a penalty were to no avail.

The half time whistle went with the score still tied at 0-0 despite some glorious chances for both sides. Posh were showing glimpses of their potential going forward, but were looking suspect defensively.

It was a lively start to the second half as well, as Bennett was cautioned for blatant shirt pulling in addition to the home side having a couple of penalty appeals turned down by referee Mr Ward who, in my opinion, made several odd decisions during the course of the game.

The home side were starting to show their authority in the game and were consequently enjoying a spell of dominance and, 12 minutes into the second half on 57 minutes, the home side finally took the lead. Centre half Kelvin Langmead went on a mazy run, taking on his marker with ease, before spreading the play out to the left to GEORGE BOYD who swept his angled drive into the far corner of Anderson’s goal. After extending his contract at the club in the summer and being described as the best signing of the summer by many fans, it was inevitable that the wide man scored on his return to London Road.

The confidence was flowing through the team in blue and McLean saw an effort deflect of the base of the post before Langmead had a towering effort cleared off the line on 69 minutes by Wayne Brown.

However, the ‘Posh’ faithful only had to wait 6 minutes after Boyd’s goal to add to the home sides tally. After a George Boyd through ball, visiting ‘keeper Andersen raced out to the edge of his area to try to rob AARON MCLEAN, but the striker evaded the challenge only to see his subsequent shot cleared off the line by Tunnicliffe. However, the ball rebounded straight to him and he rolled the ball into an empty net.

Peterborough were in total control of proceedings now and Gary Johnson decided to shake things up and made some changes to the side having a 2 goal cushion. Lee Tomlin, Charlie Lee and Arron Davies were all introduced at the expense of Aaron Mclean, James Wesolowski and Nath Mendez-Laing.

More chances were to fall for ‘The Posh’ as Lee tried his effort from range, but Anderson was equal to the left footed drive from the versatile man, from 20 yards. Lee Tomlin, having been on the pitch for just a short while, saw his first effort power over the bar, after deflecting off a Rovers defender. Tomlin was demonstrating his clear confidence and a snippet of his ability in front of the London Road End, but was unable to score a debut goal.

The home side were becoming rampant and the deserved third goal eventually arrived on 88 minutes after Tomlin was flawed on the edge of the area. Since his arrival from Scunthorpe in the summer, skipper GRANT MCCANN has taken on set piece duty. He didn’t disappoint and fired his effort from 19 yards around the wall and into the bottom corner of the goal with the aid of the post to cap a brilliant team, and personal, performance. 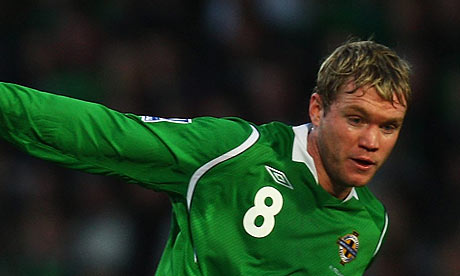 The final whistle, after a convincing 3-0 win, was greeted with a chorus of cheers from the home side who believe, after the disaster of last season, we could be in for an entertaining and successful season. The signs are certainly encouraging on this performance with good, frequent, flowing attacking football with a dominant yet creative midfield to complement that, something I feel we have lacked for a long time. There are clear improvements to be made however, especially in defence as Joe Lewis was called upon too much in the first half and could easily stake a claim for man of the match with several match winning saves. In my opinion, the clear weakness’s lie at the heart of the defence where Bennett seems to suffer from lapses in concentration (despite evidently having quality ability) and Langmead looks suspect with his positioning and decision making. Having said this, it was a competent performance from both centre halves.

A match full of positives is surely recognised within the ‘Posh’ camp with Boyd claiming we are “back to our best”, McCann describing it as a “great start” and head coach Gary Johnson believing it was “the perfect start”.

The Final Preview – The Predicted Table And The Players To Watch.
… We’re Going To Wembley – Peterborough United 4-1 Rotherham (Carling Cup, Round 1)