A Tale of Substitutes – Tottenham vs. Manchester City

In 6 minutes, the fortunes of both managers have been completely altered.  Spurs substitutes Lewis Holtby, Tom Huddlestone and Jermain Defoe all played their roles in the pulsating comeback at White Hart Lane which not only rekindled Spur’s hope for a top four finish but also left Man City’s title hopes hanging by no more than a thread.

Gareth Bale, returning from an ankle injury, was unimpressive and wasted most of his team’s possession travelling sideways across the pitch or attempting dribbles until the 75th minute when he collected a pass from Kyle Walker – who surprisingly turned down to shoot 25 yards out – and sent a brilliant low cross across a stationary City backline for Dempsey to slid in at the far post.

January signing Holtby intercepted the ball in the middle of the park and unleashed Defoe on a counter-attack duel against City captain Kompany. When Defoe is given space to get on his right foot inside the box, few would bet against him to find the back of the net. This was the case. Kompany had an afternoon below his own standard as he failed to intercept Bale’s cross to Dempsey earlier and then uncharacteristically allowed Defoe the time and space to get on his right foot. You know the rest. 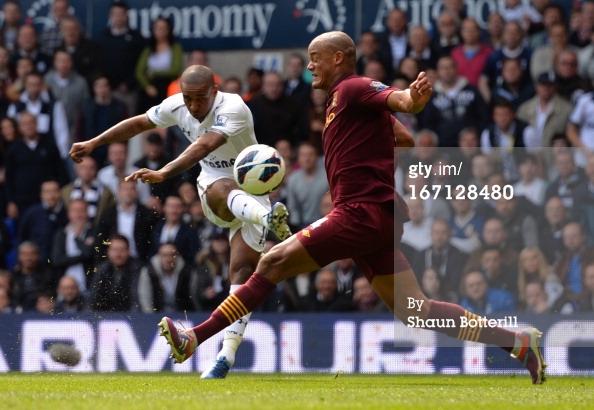 Who lets Defoe to get on his right foot?

The introduction of Huddlestone added range to Spur’s passes but the final goal was irrelevant to the sublime diagonal passes. Huddlestone strolled unmarked for 20 yards and his through ball was met by an accelerating Bale inside the box for a chipped finish over Joe Hart to complete the comeback.

AVB won the match with his substitutes and Mancini lost his with substitutes.

Man City scored in the 5th minute and had more shots on target than the home team in the first half but in truth they weren’t as dominant as statistics suggest. James Milner, who provided the assist to Nasri, was substituted by Kolarov and Nasri switched to the right. Nasri disappeared since then and Kolarov’s only impact was tripping down Huddlestone in an off the ball incident. The Serb did sent a close range free kick just above the woodwork but it was already in the dying minute.

Scott Sinclair was readying himself when the score was 2-1 and he came on for Dzeko – who was as ineffective as Adebayor – when it was 3-1. Was Mancini too lazy to change his mind, or does he believe a forgotten man is the impetus for his jaded team?

And Lescott came on for Clichy in the injury time with no apparent reason.

With Javi Garcia and Sergio Aguero on his bench, the Italian could’ve changed his fortunes if he acted swiftly enough. 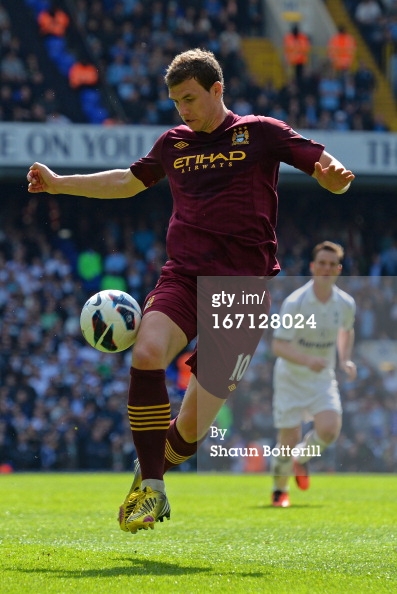 Dzeko should definitely be taken off way earlier and if Javi Garcia was brought in, they would have more steel in the centre where runs from Dembele, Parker and later Holtby and Huddlestone could be prevented. It could also liberate Yaya Toure higher up front to create a bigger impact. Aguero, with the ability to change a match single-handedly, could have caused a lot more problems with his movement and dribbles. However neither was brought on. It was, too, uncharacteristic for Mancini to take off underperforming players so reluctantly.

Spurs are now 2 points behind 3rd place Arsenal with a game in hand and level with Chelsea who played a game less. A top 4 finish is back on track plus a huge boost in team morale.  Mancini, however, may have to finally concede the title race in spite of what his assistant says if Man Utd win Aston Villa on Monday.

Tottenham Keeps Pace in Race to Europe
A crucial time to buy for Tottenham, Liverpool and Chelsea