Tottenham prove they have more than just Gareth Bale

Gareth Bale has recently been the only man people can think of when talking about Tottenham. On Thursday evening, the North London club proves they are more than a one-man team. Gareth Bale gave them the lead, but it was the spectacular team effort that fired them past Inter Milan and put them in the driving seat to advance into Europa League Quarter Final.

Andre Villas-Boas adopts a completely contrasting approach to that of former manager Harry Redknapp in this “second tier” European competition. The Portuguese insists Tottenham must have the mentality to compete in three games a week should they aim to challenge Champions League. Despite missing the injured Emmanuel Adebayor, Benoit Assou-Ekotto and Scott Parker, AVB never shies away from fielding his first-team squad in Europa League. 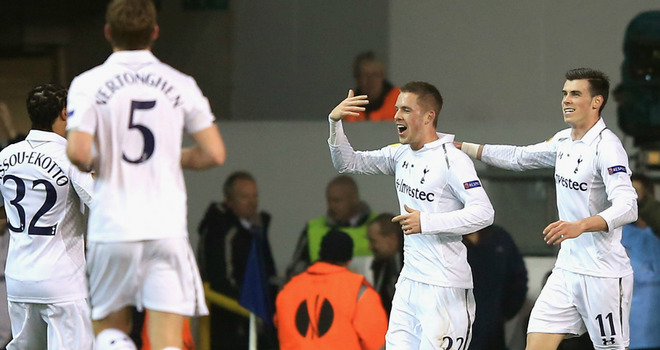 Seeing last season’s famous meltdown in Premier League, AVB’s squad selection would unlikely be welcomed by the Yids. Nevertheless, his gamble may start to justify. Tottenham scrambled into the knockout stage and just overcame Lyon in the dying seconds of the round of 32. Since losing to Everton in early December, they have been unbeatable in the Premier League and are seven points above fifth place Arsenal at the moment. More regular playing time with purpose improves the team chemistry and helps unite the team. With growing confidence and team spirit, victories come along and players can only enjoy the football they are playing.

One could not deny they have been relying heavily on the individual brilliance of Bale, notably the victory against Lyon, West Brom, Newcastle United and West Ham. However, the 3-0 win against Inter Milan was more than the Bale show, while the Welshman would be suspended for the second leg because of simulation.

Gylfi Sigurdsson indeed had overshadowed Bale in this night. Following a tough start to his White Hart Lane’s career, the hardworking Icelandic midfielder is beginning to discover his comfort zone at Tottenham. After scoring his first league goal for Tottenham at Upton Park, also an important equaliser, Sigurdsson netted his first goal in White Hart Lane and set up Bale’s opener with a first-class delivery. He is certainly making a shout not to be only a role player under AVB.

The effort of their solid defence should not be undermined as well. Led by inspirational captain Scott Parker and veteran William Gallas, Tottenham produced one of the best defensive performance of the season. Even when they had a moment of complacency, another veteran Brad Friedel acted as their last wall of defence and made a decent save with his foot. The clean sheet could be invaluable, given they will be travelling to Milan without Bale next leg.

An all-rounded performance shows how high the morale currently is in Tottenham’s dressing room. It seems there is no way they will throw away their lead in Premier League once again. However, there are still more obstacles to overcome before claiming their Champions League spot. Coupled with the distraction of Europa League, it will be a stern test to AVB and his side’s mental strength to ensure 2013 will not be wrapped up with a disappointing ending.

Has the North London status quo between Arsenal and Tottenham changed?
How Spurs Can Raid Real Madrid this Summer