Tottenham will be the ideal destination for Christian Benteke

Entering July, the transfer market has once again dominated newspaper headlines. The never-ending rumours around Cristiano Ronaldo, Gareth Bale, Edinson Cavani and Luis Suarez have started to bore the audience. Christian Benteke has chosen the right moment to steal the limelight by submitting a foreseeable transfer request, despite only arriving at Villa Park a year ago.

Benteke is a big fish eager to get out of the small pond. Although Paul Lambert demonstrated that he can get the best out of youngsters, the long-term project at Villa, which he hopes to build around Benteke, will not match the ambition of the big man, who definitely has his eyes on the World Cup next year.

Tottenham and Chelsea quickly emerge as the front-runners to secure the service of the Belgian. The prospect of playing Champions League football with national teammates Eden Hazard and Romelu Lukaku appears to be more appealing than going to White Hart Lane, but Tottenham should be the sensible option for the 22 years old striker.

A package combining strength and technique, Christian Benteke undoubtedly possesses the quality to compete at top level of football. To be nurtured by one of the top coaches in the world, Jose Mourinho, can only benefit his game.

However, Benteke should realise playing time on the pitch is incredibly crucial at this stage of his career. Unlike the young Lukaku who first arrived at England, his ability to perform in Premier League is beyond doubt. What he needs now is the opportunity to play alongside top-class players to bring his game to another level.

He may relish the challenge to compete against Fernando Torres, Demba Ba and Romelu Lukaku, but how confident is Benteke in winning a starting spot at Stamford Bridge, when Mourinho usually relies heavily on a core group of players as well as a lone striker formation? Marc Wilmots – the current manager of Belgium – certainly does not want to see Lukaku and Benteke both warming Chelsea’s bench for the coming season.

At North London, he will be treated as the no-brainer first choice striker. Adebayor’s late resurgence seems short to convince Daniel Levy and AVB to retain him. With the failure to capture David Villa, so as the aging Defoe who is more suited to come off the bench, Benteke will not have to worry about the lack of first-team opportunities, as long as he can maintain his form. Even if Levy’s long term target Leandro Damiao is really arriving, Benteke still holds the advantage of his proven track record in England. With Andre Villas-Boas also taking the Europa League seriously, Benteke can also have a shot at European football.

Benteke needs Tottenham, and Tottenham needs Benteke too. Adebayor may be more polished in holding up balls with back to goals, but the younger, stronger and more direct Benteke will be an upgrade to Tottenham’s frontline. More importantly, Benteke’s mobility and flexibility would allow Gareth Bale to continue flourishing in his free role, just as how Andres Weimann benefited from his presence last season. With Paulinho also in the mix, the potential attacking line-up already sounds very threatening and exciting. 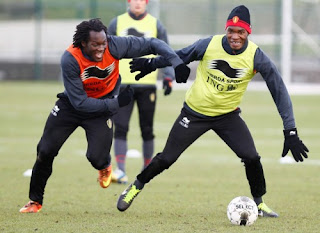 Now it is down to Daniel Levy to pull off the deal. His reluctance to dish out £25 million could be the deal-stopper, even though Benteke appears to prefer a new white jersey rather than a blue one. Tottenham could not afford to miss out on another top-notch striker. Rather than swapping an unwanted player to save a couple of millions, Levy should consider the potential return from the investment on a player who can only get better and also, make the team better. AVB would hope technical director Franco Baldini can play a part in the deal to put Spurs in a stronger position in securing Champions League football, something that may keep Gareth Bale and potentially Benteke in the team for a long spell.