Triumph, Scandal and Despair, the World Cup History of Argentina 1930-66: Early Promise Fades
La Albicelestes’ story beings back in 1930, at the very first World Cup held in neighbouring Uruguay. Thanks to some scintillating football Argentina reached to the final, only to be beaten 4-2 by the hosts in front of 93,000 spectators.   However this was as close as La Selección would come for a long while,  the six tournaments from 1932-62 being blighted by withdrawals, qualifying failures and early exits. 1966 offered a slight improvement as the side reached the quarters only to be eliminated by eventual winners England.

1970-78: From Disappointment to Glory
The tournaments in 1970 and 74 were again disappointing, but the decision to stage the 1978 finals in Argentina lead to widespread optimism that the team could finally fulfil its potential. La Selección certainly didn’t disappoint,  defeating the Netherlands 3-1 to lift the famous trophy on home soil. However the triumph wasn’t without controversy. Needing a 4-0 victory over Peru to advance from the second group phase, Argentina went two better and secured a 6-0 win. However five of these goals came in the second half and the fact that the Peruvian goalkeeper had been born in Argentina lead to accusations of foul play. Similar suspicions would occur in the final, where Argentinean protestations against a plaster cast worn by one of the Dutch players have been interpreted as unsportsmanlike stalling tactics designed to create a hostile atmosphere. 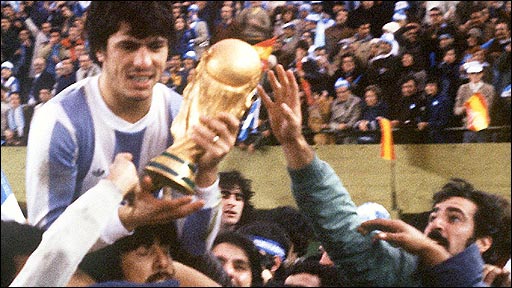 1982-94: The Maradona Years
From 1982-94 Argentina’s World Cup fortunes became synonymous with the most infamous player in Word Cup history, Diego Armando Maradona. Things didn’t start well as Diego’s dark side saw him sent off during a second round defeat to rivals Brazil in 1982. Yet within four years that would be little more then a memory, as the diminutive star took Mexico 1986 by storm. Scoring five goals and creating five others, Diego lead La Albicelestes to their second World Cup, defeating West Germany 3-2 in the final.

However, the enduring story of this tournament is the quarter final clash against England. With the Falklands War still fresh in the memory it was always likely to be a fiery encounter and so it proved. Such is the notoriety of the ‘hand of God’ and the wonder goal which followed, that I will not go into details, save to state that Maradona remains a figure of intense dislike on English shores and a semi deity back home in Argentina.

At Italia 90 Diego and company came very close to defending the trophy, only to lose the final in a rematch against the Germans. The route to the final included a second round victory over nemesis Brazil, and while a great result it wouldn’t have been Argentina without some sort of controversy. The clash has since become infamous for the so called ‘holy water’ scandal, after Brazilian defender Branco alleged that Argentinean staff handed him a doped water bottle which affected his performance.

By 1994 Maradona was 33, but if you thought he might have calmed with age think again. After a 4-0 thumping of Greece and a rather enthusiastic celebration from Diego, things were looking promising. However one match latter Maradona tested positive for the banned substance ephedrine and was consequently sent home. Undoubtedly affected by the loss of their talisman, Argentina scraped into the second round only to be eliminated by Romania. It was a disappointing but perhaps fitting way for Diego to leave the world stage, after all he was never going to go quietly. 1998-2006 Unfulfilled Potential
Despite possessing some talented squads the post Maradona years have been somewhat underwhelming, with La Selección failing to advance past the last eight. Notable incidents include a controversial second round victory over England in 1998 and Esteban Cambiasso’s wonder goal from 2006, in which the midfielder hit the net following 25 consecutive passes.

So there you have it, one can justifiably say that Argentina’s World Cup History has it all, and with a certain Diego Maradona now managing the side, La Albicelestes summer is likely to be anything but boring. In many ways Maradona’s combination of sublime skill and a combustable temperament is representative of the national team as a whole, as for every perfect footballing display there has been a controversy or scandal to match, and it is this combination which makes Argentina so fascinating to watch.