The Ugly Side Of Barcelona and Mourinho

From the moment Jose Mourinho walked into the Press Room at the Santiago Bernabeu you felt that something quite extraordinary would happen the night afterwards. It often does when this man is involved. Especially when Barcelona are in town.

No stranger to controversy, Mourinho, swagger and all, strode into the room containing many foreign journalists as eager as children come Christmas morning with a plan. Two plans even. One for on the pitch and one for off of it. As he took his seat, each man in a suit leant forwards expectantly as the show began.

The 4th El Clasico of the season – probably the most important one of the season. In fact for the last few seasons. Contesting for a place in the Champions League Final, fans of both teams could wait no longer. Unlike the rivalry between Rangers and Celtic which has turned increasingly sour over the last few months, much more dwells underneath and behind the football on show in each match between these two juggernauts.

Barcelona are the pride of Catalunya, a society with locals who yearn to be separate from Spain. Years of fierce political revulsion are swept away when El Clasico comes around. It is Catalunya versus the best of Spain. No Catalans even dream of playing for Real. They detest one another.

Having triumphed in the Copa Del Rey Final merely a week ago, Madrid showed that a Barcelona side, one deemed unstoppable after thrashing Real 5-0 earlier in the season, could actually be beaten (albeit in extra time). Tactically sensational, Mourinho smelt blood and felt the need to stoke the flames of the fierce pre-match rumblings in his press conference.

He provoked the before unprovokable Pep Guardiola into a rage uncharacteristic of him. Mourinho’s mind games at their best. Would it ruffle his team’s feathers however? It was certainly Mourinho’s intention.

The world sat on edge. For Spain it was a proud moment, for a neutral the excitement was prodigious. A battle between crafted, genius football against clever tactical counter attacking play. It was as though Mourinho and Guardiola had come to play a game of chess, their pieces aligned menacingly adjacent to each other as the encounter began.

And it may as well have been a chess match. There was little football played at all. If any before the 87th minute. A foul battle reminiscent of tell-tale children in a playground, eagerly pleading with referee, Wolfgang Stark, to red card an opponent. Ludicrous cheating and unsportsmanlike conduct reigned foul of an utterly atrocious game played by those who had the talent, but were more intent on attempting to end the match with less.

Real started brightly, forcing Barca into early mistakes. Nerves looked to be inhibiting performance; Xavi was forced into rushing passes forwards, Messi and Villa were targeted throughout and Mascherano’s centre half skills were tested. Was Mourinho’s tactical wizardry going to shunt Barcelona yet again? From a meek first 45, Xavi had a shot which was well saved by Casillas and Ronaldo toe punted hopefully from 35 yards.

But the foul stench of poor conduct became ever more apparent. Sergio pretended to take a hand in the face when it clearly brushed his chest, Pedro acted as if he had been struck in the face by Arbeloa when he was just impeded and every time a player hit the deck, Stark was confronted by every player within 20 yards – sometimes double that distance!

But don’t think Real were totally blameless (the title purely aims to drag you in as Barca characteristically play beautiful football). Di Maria’s attempts to get Dani Alves in the book were scandalous and any moment of contact between opposing players fuelled an endless run of free kicks. The match was so stop start, American Football was beginning to look more appealing.

We could at least console ourselves at half time safe in the knowledge that we wouldn’t have to see that for 15 minutes. A massive brawl then ensued between the Barca bench and Real’s players. Sub goalkeeper, Pinto (no stranger to controversy, he blew a whistle earlier on in the season which fooled an opponent into thinking he was offside) got himself involved and was duly sent off by Stark. 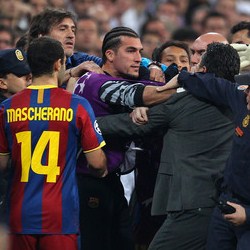 1 Pinto over the limit?

Play resumed (continuously). Mourinho was still in the drivers seat. Had it not been for Ronaldo’s greed, Real could be the team better off. Nevertheless, his plan of quelling the Catalan ‘dream team’ was working.

That was until Pepe came in late on Alves midway through the half. Alves rolled and screamed, intent on sending Pepe for an early bath. It worked. A challenge, perhaps a tad clumsy, but still an honest one that made contact with the ball was deemed worthy of a red card and the contest was over. Mourinho mocked the decision, clearly trying to conceal clear panic and knowledge that his plan had little chance of succeeding hereafter. His reaction warranted a red and he was too sent away from the pitch.

Ibrahim Afellay came on as a substitute for Barca and changed the game. Fresh legs on against a team of 10, he was the difference. Skinning Marcelo, he whipped in a great cross for the wily Messi who had made a clever run to tap in. Real were never coming back.

Poor conduct continued. Aside from Alves’ cowardly attempt to dismiss Pepe, Marcelo trod on Pedro’s knee, Ramos took out opponents with vigour and diving ruled supreme. It didn’t matter, the game knew it’s result. And with one less man and a tiring side, Messi gave viewers some solace by running and running and running until he found the bottom corner in a beautiful goal worthy of an El Clasico.

Thankfully there were no scenes similar to the end of the first half come the final whistle. Madrid complained but to no avail. Guardiola had won. But how fairly?

Mourinho, with one last breath until the 2nd leg next week, spoke of the injustice of the sending off. His words came out deadly serious. Heavily critical of Guardiola too. Mourinho said of how he wished Guardiola could win a Champions League fairly, without the playacting. Hypocritical words from the Real boss, his team are not the blameless angels he has nurtured into a tactically supreme vehicle for success.

The war of words rages on with Barca likely to take action over the comments made but for a football match, it was about as similar to the childish bickering that reigns supreme off of the pitch than anything else. Mourinho and both sets of players should be ashamed of themselves but at the end of the day, an El Clasico win is as priceless as anything in the strange world of football.