Wake You Up When September Ends

1. Swansea’s magic faltered: The honeymoon period is officially over. Not only has Michu stopped scoring, so as the whole team. Since international break, Swansea has collected no goals, no wins and conceded seven. Their struggles against the more physical teams recently could have ended in October at home against Reading and Wigan. Whether Swansea can escape the slump will be a good indication to Michael Laudrup’s genuine managerial capability.

2. Merseyside split: The Reds ended their blue September with a 5-2 win over Norwich. Questions remain in their defence and finishing, which has let down their improved passing ability. Everton’s XI has been impressive and Moyes is able to get the maximum out of the balanced starting line-up. Squad depth will be a concern, but their exit in Capital One Cup indicates their determination to focus on securing the European berth. 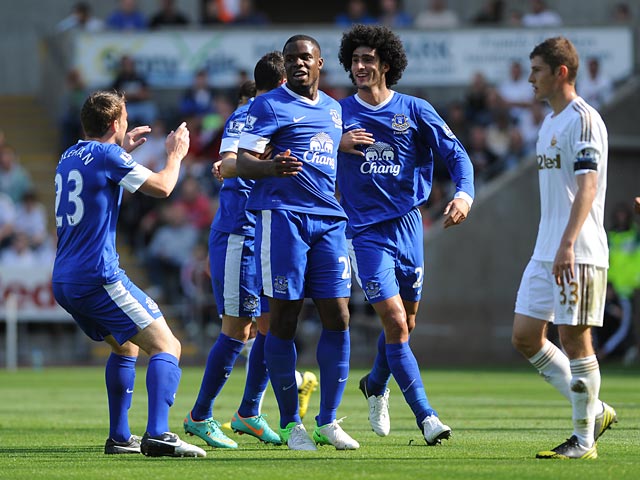 All goes well for Everton, but not quite for Swansea

3. Officiating woes continue: It proves that officials are not merely biased towards top teams. In general they are poor. Manchester City was the major victim, conceding  to Crouch’s basketball move and Riise’s soft penalty. Jonjo Shelvey was sent off in Anfield, but seeing Johnny Evans escaped. Antonio Valencia won a soft penalty which destined to be the winning goal. Demba Ba of Newcastle benefited from a no-call handball against Reading, while his team rescued a point at Goodison Park thanks to wrongly-disallowed goals for Fellaini and Anichebe. More pairs of eyes clearly do not help; we need eyes of better quality.

4. Defence disaster: Southampton and Norwich just could not sustain their concentration in defence for 90 minutes. More surprisingly, Manchester City, who usually is good at defence, still could not keep one clean sheet this season. Manchester United’s struggle at the back is less unexpected, given only four healthy senior defenders are available. Are the spears stronger, or has the shields weakened this season?

5. I love, I love Allardyce: What has he done wrong to not earn a new contract? Even West Ham supporters, who clearly are not convinced by Big Sam’s style, could not resist praising the charismatic manager. The players would either be motivated to keep Big Sam in Upton Park, or demotivated because of the lack of security.  The management board is surely playing a gamble, but the results speak for Big Sam.

Review of the season so far EPL , do you agree?…
Top Premier League Title Contenders This Year