Answer: they’ve all been, somewhat bizarrely in Adam Johnson’s case, linked with Real Madrid in the last few hours. You might even still be wondering who on earth Adam Johnson is. Well, he’s Middlesbrough’s 21 year old left winger, capped by the England U21’s 16 times. Former Madrid boss Juande Ramos declared his interest in the player way back in December, but a deal failed to materialize. Now, new Real Madrid gaffer Manuel Pellegrini has reignited Real’s interest, and the Spanish giants could offer around £12 million for the youngster. Recently relegated Middlesbrough would almost certainly accept any bid for Johnson over £10 million, but would the winger be prepared to move to a foreign country at such a young age?

Johnson could find himself playing in rather warmer conditions next season

With the recent signings of Cristiano Ronaldo and Kaka, Real Madrid have proved they are willing to spend big, and in turn attract some of the world’s best players to the Bernabeu. It seems with their pursuit of Johnson that Madrid also want to gain recognition for signing promising young players as well as signing world renowned superstars. Johnson has shown some promise for both Middlesbrough and the England U21’s but even still, it’s fair to say not many people expected him to have been linked with the world’s most famous club. Nevertheless, a deal isn’t impossible and Real Madrid aren’t averse to the odd English winger- anyone remember Steve McManaman? And now back to some rather more familiar Real Madrid transfer rumours. Inter Milan’s sulky striker Zlatan Ibrahimovic has been linked with a move to the Spanish capital. The 27 year old, who has scored 57 times in 88 appearances for Inter, has reportedly expressed an interest in joining Madrid, but his £80 million price tag has proved a stumbling block for any potential move. However Real believe they can tempt Inter with £50 million, which they believe is a reasonable fee.

He might be lazy, sulky and Berbatov-esque, but Real would still splash out £50 million for the Swedish hitman

Florentino Perez and Manuel Pellegrini apparently see the striker as the perfect addition to their newly assembled squad. It seems that Pellegrini wants to line up next season with a “christmas tree” formation, reminiscent of the formation Jose Mourinho used to play at Chelsea. Diarra would play as the defensive midfielder with Kaka and Sneijder in more advanced roles and Ibrahimovic would be supported by Ronaldo on his left and a new addition on the right. Franck Ribery has been linked as that “right player” but his fellow countryman Karim Benzema looks to be the more likely signing. 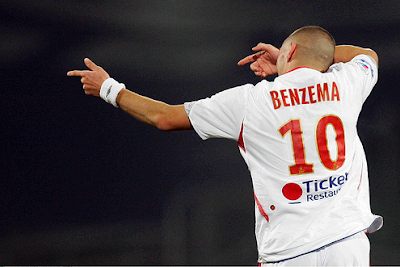 Benzema is gunning for a move to Madrid

Despite Perez earlier stating that: “‘If I had to choose between the friendship with Manchester United and the signing of Ronaldo, I would choose the friendship,” the bond between Madrid and Manchester United is very weak at the moment, and Perez could anger the English champions further (and in particular Sir Alex Ferguson) if he signs Benzema.

It is believed that, as part of the Ronaldo deal, Florentino Perez and Manchester United made a gentleman’s agreement where the English club would be allowed to have the first bid, and the the first direct contact with the player, but Perez looks set to break this agreement due to interest from Arsenal.

Arsenal manager Arsene Wegener is reportedly confident of signing Benzema due to Arsenal’s strong French links but Benzema would most probably favour a move to either Madrid or Manchester.