Wigan Athletic gave away their advantage in the relegation battle

They had twice turned it around at West Brom in the weekend. Last night at home, they simply gifted it away. Twice leading Swansea, Wigan threw away the match in hand and left themselves in the worst possible situation ahead of the Wembley trip.

Triumph at Wembley could mean nothing if they will be in the Championship next season. The Latics knew they had to battle, and they came out fighting from the very first minute. Without the injured Maynor Figueroa and Antolin Alcaraz, club captain Gary Caldwell was recalled. Being dropped as the slow centreback does not fit Martinez’s high line defense, the experienced Scot was however seldom tested in the first half, as the Michu-less Swansea continued their lacklustre performance since their own Capital One Cup triumph at Wembley.

Michael Laudrup made it clear his aim to finish in the top half of the table. Whether his players share his ambition is questionable. When Espinoza, replacing another injured defender Beausejour, stroke a low volley following Michel Vorm’s punch, a bit more commitment from Angel Rangel or Garry Monk could have at least deflected the shot to give Vorm a chance to deny the goal. Instead, Wigan scored a big opener in the dying minute of first half.

Swansea’s one-striker formation, similar to that of West Brom, allowed Martinez continue to urge his fullbacks to roam forward, in support of their creative front three, Arouna Kone, Callum McManaman and Shaun Maloney.  Espinoza got the glory of their first, while their second was started by an unlikely provider. A well-measured through pass by Gary Caldwell sent James McCarthy clear to beat Michel Vorm.

It was an instant reply to Swansea’s strong start to the second half. The midfield pushed higher up in search for an equaliser and momentarily sent Wigan panicking. Just as Rangel kept hard to hide his celebration, in respecting his former manager, after receiving Routledge’s diagonal pass and hit both posts before scoring his volley, James McCarthy re-inspired Wigan to lead again.

Twists and turns make football much more appealing, but it was the last thing Martinez wanted to see after leading in a match of such significance. James McArthur ruined an opportunity to put them 3-1 up. Shortly after, the hero in the second goal turned into a villain. Gary Caldwell carelessly gave away the ball and saw Swansea punish their high line with a rapid fastbreak. Itel Shechter’s first goal for Swansea had undone all the hard work by Wigan. However, Caldwell knew he had only himself to blame. 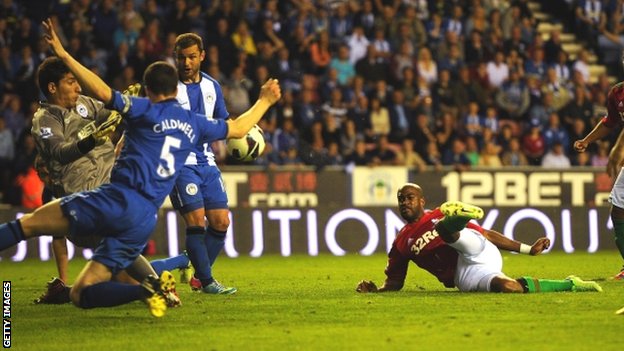 Desperation and impatience grew among the home side. Martinez sent Di Santo in with the hope of providing some spark, but Laudrup cleverly used Nathan Dyer as a counter-substitution. The enormous speed of Dyer piled pressure on Caldwell, Scharner and McArthur when trying to play their way out of defense. With growing nerves, they had finally broken down. A string of chaos in the box resulted in missed headers by both Maloney and McArthur, in the area which should be guarded by left back Espinoza. Tiendalli did not think twice to give Swansea a leading position for the first time of the evening.

Michel Vorm’s head injury in turn gave Wigan a much needed lengthy break to calm themselves. Half a minute after the match had restarted, Wigan experienced another setback. Ronnie Stam, having only just come in, wobbled off following a sliding challenge by Nathan Dyer. Playing with ten men, Arouna Kone made the final attempts to save Wigan a point, but neither his right foot nor his head was strong enough to beat reserve goalkeeper Gerhard Tremmel.

Just as McArthur blew away the final cross when the clock hit the 99th minute, Martinez knew their faith is no longer controlled in their own hands. They have witnessed miracles in the past, but is the belief still at DW stadium? And can they begin this mission impossible first at Wembley on Saturday?