A drunk referee and having to be smuggled out of the stadium: top five craziest referee moments 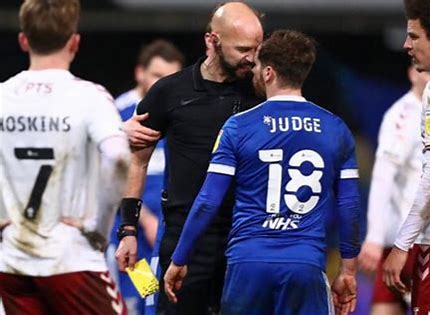 It was a shocking moment when referee Darren Drysdale locked heads with Ipswich Town’s Alan Judge after a heated confrontation. The English referee is now free to officiate again after being given a backdated ban for improper conduct by the FA.

It was a truly crazy incident, however, it was not the first time that a referee has stolen the headlines for the wrong reasons. Here are the top five craziest referee moments.

On the 23 March 1951, referee Arthur Blythe made the decision to abandon a match between Newport County and Norwich City after 70 minutes. However, the issue was that Newport were winning 5-1. The Newport fans were understandably irate at Blythe, so for his own protection the police advised the official to leave the ground in disguise. The Newport fans were still furious, however, they did not spot a man wearing a St Johns Ambulance uniform being snuck into the back of a police car and being driven to the railway station. Despite strong protest, the match had to be replayed with the two teams drawing 1-1 in the rescheduled game and Arthur Blythe becoming Newport’s most wanted.

This is, perhaps, the strangest story you will ever hear about a referee. Brazilian referee, Francisco Chaves, certainly is not somebody to mess about with or to question his decisions. Jose Ramos da Silva should’ve knew that before making a case for his team being awarded a free-kick. Mr. Chaves reacted furiously, reaching into his pocket and pulling out a knife before stabbing Da Silva, who fell dead at his feet. The match was unsurprisingly abandoned.

Many football fans have made disgruntled comments about the referee being drunk when decisions are not going there way. But, on this occasion, the referee really was drunk. The crazy incident occurred during a Belarus league match between FC Vitebsk and FC Naftan Novopolotsk on July 5 2008, when the crowd noticed Shmolik had been behaving strangely. The referee did not give out any cards and kept standing in the centre of the pitch, hardly moving. At full-time, Shmolik had to be helped off the pitch because of ‘back pain’, before he was taken to hospital to receive treatment for his ‘back pain’. Whilst at the hospital, tests discovered that he had a high level of alcohol in his blood. He was suspended by the Belarus FA after the game.

Sometimes tensions can just boil over and even the referee can descend into red mist. That was certainly the case during a Ligue One match between PSG and Nantes. Tony Chapron was one of the most respected referees in France and at 45 had already announced this would be his last season. However, when he fell to the ground when his heels were clipped – apparently accidently – by Nantes’ Diego Carlos, he saw red and responded by kicking out at Carlos before booking him again. The French referee was given a six month ban, however, he returned and was named Ligue One referee of the year before hanging up whistle and retiring. Doesn’t everybody loves a happy ending?

Finally, the ultimate referee, a man that was in the Guinness World Record book for the most sending’s offs in one football match. The referee dished out an incredible 20 red cards during a Paraguayan game between General Caballero and Sportivo Ameliano. It started with two players fighting, before Weiler sent them both off, and it ended in a 10 minute melee, with Weiler feeling the need to send off a further 18 players. With just two players left on the field, the match had to be abandoned. I can’t think why?