Guardiola admits Bielsa may be ‘cleverer’ than him after Leeds draw 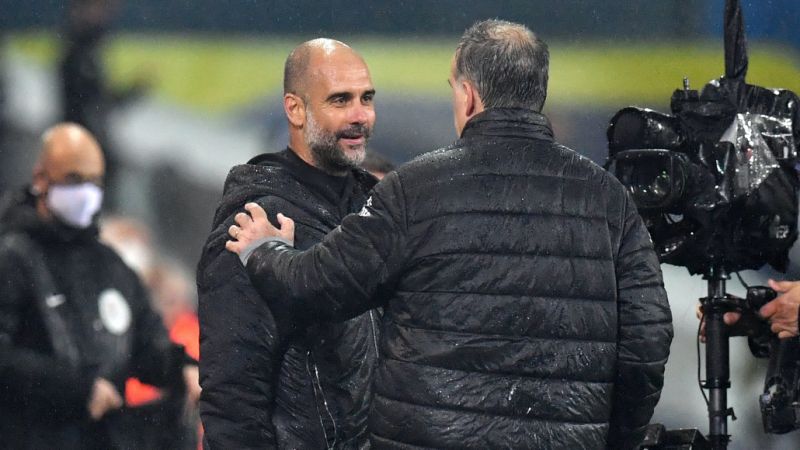 The Spaniard has opened up on the fact that he struggled to answer a question posed to him by the Argentine right after their 1-1 draw in the Premier League on Saturday.

Despite Raheem Sterling’s 17th-minute opener for Manchester City, Guardiola’s size were unable to close out the game with Rodrigo scoring a second-half equaliser for Leeds.

City were made to pay for not maximizing their chances in the final third as they could only manage two shots on target out of their 23 in the game while the host had five more on target.

Marcelo Bielsa’s men also edged out Guardiola’s team for possession (53% – 47%) and passes (425 – 380) as they continue to prove they have what it takes to compete in the English top-flight.

Guardiola and Bielsa were seen to have exchanged a hug after the full-time whistle with the Leeds manager eager to get his counterpart’s thoughts on the game – something the City manager seem to need more time to process.

“He said to me ‘What is your opinion of the game?’ And I said ‘After one second I am not able to analyse the game!” Guardiola told Sky Sports post-match.

“Maybe he’s cleverer than me! I’m not. I need time to process how was the game, but you know I said that I thought it was a good game, it was fair and that’s why the result was the result.”

Speaking later on, Guardiola paid his respect to Bielsa’s side for not shying away from the contest.

“The approach was incredible and it’s nice to face a team like Leeds because they want to win, like they did with Liverpool. It’s incredibly entertaining football and it’s interesting for the fans,” Guardiola told BBC’s Match of the Day.

“It was an entertaining game for everyone. I’m incredibly proud of these players who enjoy football and come to this country and play many years at a high level. This is their first pre-season together, we couldn’t do it more because the opponent was so good like all Marcelo Bielsa sides.”

Bielsa, however, conceded that his side weren’t better than the Citizens for much of the game but only managed to engineer moments of dominance and were indeed rewarded.

“The start and the end were with City and the end of the first half and the beginning of the second half were a bit better for us,” Bielsa said.

“For them to be superior to us is pretty easy for them, it doesn’t require much effort, whereas for us it requires us to go to the limit to be on their level.

“We couldn’t take the ball off them and they were taking the ball off us very easily. We did it with a lot of effort, a lot of aggression to win the ball back and the confidence in our game grew.

“It wouldn’t have been fair if we had won the match, it would’ve been possible, but not fair.”