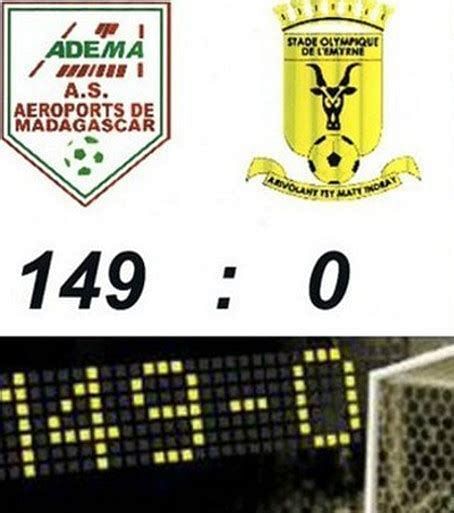 Football is the most popular sport in the world. Millions of fans watch games all over the world each week, regardless of the scoreline and results or even whose playing.

Every once in a while some crazy scores pop up, whether a huge upset, a hammering or a ding-dong battle with both teams seemingly forgetting how to defend.

Below are five games that are something special. From scorelines of 149-0 and 31-0, to Champions League finals for the ages, here are five of the craziest football matches in the history of the game:

On 11 April 2001, Frank Farina’s Australia faced the minnows of the American Samoa in a qualifier for the 2002 FIFA World Cup. Whilst the hosts at the International Sports Stadium on Coffs Harbour were heavy favourites to win heading into the game, few could have predicted what was about to occur.

What is still the largest victory in international football, Australia averaged a goal every three minutes, which included Archie Thompson scoring a record 13 goals in a single international match, and teammate David Zdrilic scoring eight.

Two days earlier, Australia had set the record for margin of victory with a 22-0 thrashing of Tonga. However, Farina’s side failed to qualify for the World Cup in South Korea and Japan the following year after losing the intercontinental play-off against Uruguay.

You can see all the goals from Australia 31-0 American Samoa here:

It was a surprise to see Liverpool make the 2004-05 UEFA Champions League final, particularly as they would go on to finish fifth in the Premier League, 37 points behind champions Chelsea.

Rafa Benitez’s side that included the likes of Djimi Traore, Milan Baros and Luis Garcia, only narrowly scraped through the group stage before knockout victories over both Juventus and Chelsea.

AC Milan were defending Serie A champions who topped their group that included Barcelona, with the likes of Paolo Maldini, Andrea Pirlo and Andriy Shevchenko in Carlo Ancelotti’s side.

Goals from Maldini and a Hernan Crespo brace appeared to put the tie beyond Liverpool’s reach before half-time, which saw some Liverpool fans leave the Ataturk Olympic Stadium in Istanbul before the second half got underway.

A miraculous eight-minute spell in the second half saw goals from Steven Gerrard, Vladimir Smicer and Xabi Alonso make it 3-3 on the hour.

With no more goals in normal time and none in extra-time, aided by a world class save from Jerzy Dudek to deny Shevchenko from close range, the match went to penalties. The Polish goalkeeper would be Liverpool’s hero again as he denied or put off spot kicks from Serginho, Pirlo and Shevchenko to help Liverpool lift the trophy for the fifth time.

Mehmet Scholl and Carsten Jancker would hit the frame of the goal whilst Olivier Kahn had very little to do at the other end during the 90 minutes. That was until stoppage time…

Thomas Linke’s mishit clearance was volleyed back into the penalty area by Ryan Giggs for substitute Teddy Sheringham to turn home an equaliser from close range in the first minute of stoppage time.

Bayern Munich players appeared not to have recovered from the equaliser when Manchester United won another corner only for Ole Gunnar Solskjaer to pop up at the back post to poke home the winner from Sheringham’s knockdown. Manchester United had completed an historic treble in dramatic circumstances.

Brazil were the hosts at the 2014 World Cup when they met Germany in the semi-finals at the Estadio Mineirao in Belo Horizonte. Much had been made of a European nation never winning the World Cup in the Americas heading into the tournament.

Joachim Low’s side took the lead on 11 minutes through Bayern Munich hitman and 2010 World Cup star Thomas Muller. They doubled their lead just 12 minutes later as Miroslav Klose scored a record-breaking goal in the tournament. And then the floodgates opened.

Toni Kroos scored just one minute later and again three minutes later. Sami Khedira made it 5-0 before half hour.

Germany were able to take their foot off the pedal afterwards, not scoring their sixth until the final 20 minutes and their seventh ten minutes from time, both through substitute Andre Schurrle.

Mesut Ozil had the opportunity to make it 8-0 in the final minute but missed a one-on-one. Brazil would go up the other end and score a consolation through Oscar.

Germany would go on to beat Argentina 1-0 in the final five days later.

The final day of the 2002 Madagascan League produced by far the biggest scoreline in the history of professional football.

Remarkably, none of the Adema players scored in their 149-0 win. Emyrne, the defending national champions, netted own goals over and over again as a form of protest over refereeing decisions that had gone against them during a four-team playoff tournament.

The aftermath saw Emyme’s coach suspended for three years and four players suspended until the end of the season.

Unfortunately, there is no video footage of this game.