After being kicked out of Euro 2008 by Italy, in a shameful manner after they ranked at the bottom of Group C, two of the French senior players have decided to end their international career. Claude Makelele, aged 35 years, and Lilian Thuram, aged 36 years, have decided to put an end to their long-serving careers for France, and will now concentrate only on team football before hanging up their boots from football altogether.

Makelele had already made clear his intention of leaving Les Bleus after Euro 2008 even before the tournament started. No one had expected Thuram to continue featuring for France after this tournament as age is catching up on the defender. He has played 142 times and is the current record-caps holder. On the other hand, Makelele made 71 appearances for France. Makelele’s comments were:

“This tournament was my last. To have been allowed to wear France’s colours, that’s my trophy.” – Claude Makelele, now-retired France player 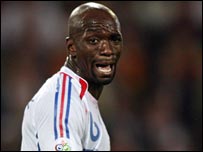 Italy vs France: In Pictures
France vs Italy: 0-2