African Cup Of Nations 2012: Ghana on the road to success

It wouldn’t be an overstatement to say the current Ghanaian team has the ingredients to, potentially, become the best African team ever. The Black Stars are firm favourites to take home the African Cup of Nations trophy this year and now pundits have even predicted they could very well dominate the competition for the next few years.

Considering how easily The Black Stars eased through AFCON qualification these predictions don’t seem all that unrealistic. Impressively Ghana strolled through all their matches undefeated, comfortably winning group I, with their only slip coming in a 0-0 draw at home to Sudan. Perhaps even more impressively they conceded just the once in these six matches.

Ghana may be taking a relatively young side to the tournament but don’t be fooled into thinking this means an inexperienced side as it homes a wealth of talent. A majority of the team were part of the side that won the U-20 World Cup in 2009 before being successfully integrated into full international level and playing in the 2010 World Cup. It was in the World up where the side caught the world’s eye reaching the quarter-finals for the first time in their history.

Black Stars fans will also be hoping that the proverbial rule of progression now means they will see their side win AFCON for the first time since 1982. In 2008 Ghana finished third in the competition and in 2010 second therefore the rule of progression should see them winning this time around.

Since the arrival of Goran Stevanovic as coach last January Ghana are now on a mean upward trajectory streak and the team seems to be clicking together at just the right time.  Defensively Ghana are arguably the best unit at this year’s edition, the central partnership of Isaac Vorsah and John Mensah is about as good as it gets among African sides, although the omission of the loveable Richard Kingson and three very inexperienced keepers could be a problem.

Much of Ghana’s attacking play comes from the flanks, where Samuel Inkoom and Andre Ayew operate. Even Sulley Muntari, who is likely play a support role in the attack, makes a lot of his runs from out wide. Derek Boateng and Emmanuel Agyemang Badu run a tight ship in the midfield. Add to the middle Kwadwo Asamoah, and Anthony Annan the Black Stars midfield unit will be difficult to outplay.

However offensively there are problems. An overreliance on Asamoah Gyan, who has fitness worries, for goals and lack of creativity through the middle mean this Ghana side doesn’t beat teams as comfortably as they should. Jordan Ayew is Stevanović’s best all-around attacker while Prince Tagoe is the closest thing the team has to a target man.

Placed in Group D, alongside Mali, Botswana and Guinea, the side is expected to comfortably qualify for the last 8 as group winners. Although with high expectations being put on the side before the tournament has even kicked off its left to be seen whether The Black Stars can live up to the hype surrounding them. 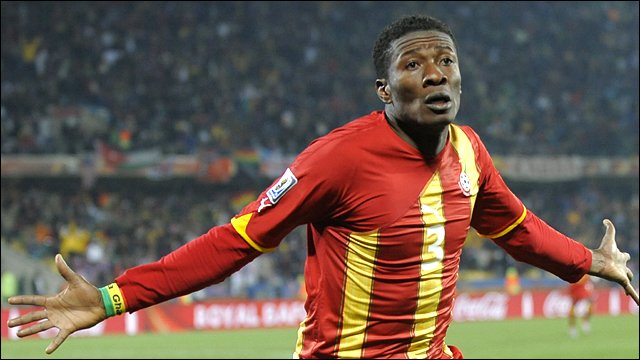 Ghana’s undoubted star man is one of the biggest characters on and off the field in African football. ‘Baby Jet’ now plays in the UAE, where he has been on top form scoring 12 goals in 10 appearances.

The 26 year old has 27 goals in 54 appearances for Ghana, and proved himself as one of the most coveted strikers in the world, after his superb performances at World Cup 2010, and more recently at Wembley, scoring an excellent goal in the 1-1 draw with England.

Gyan was underwhelming in qualification but still got a place in the side, despite a hamstring injury that threatened to keep him out of the tournament altogether. Love him or hate him, Gyan is the type of player who can win a match in an instant.

One to watch: Jordan Ayew

The younger of Marseille’s Ayew brothers 20-year-old Jordan will be given every chance to make an impact for Ghana, especially with Gyan’s fitness up in the air. Ayew is Stevanovic’s best all-around attacker.

‘Plavi’, as he is affectionately called, has promised to end Ghana’s AFCON drought in 2012. Stevanovic took over from fellow Serb Milovan Rajevac in January last year, and navigated Ghana undefeated to the top of Group I. The 45 year old has previous experience managing in his native Serbia with one its most famous clubs; FK Partizan and has experience at national level having been the assistant with Serbia and Montenegro before.

Stevanovic alternates between the traditional 4-4-2 formation, the attack-minded 4-3-3 and sometimes even the more conservative 4-5-1 depending on the opposition he encounters, and he will almost certainly use a selection of set-ups during the finals.

Anything less than a final would be a failure from a Ghanaian point of view. They will not have a better chance to satisfy their thirst for Cup of Nations silverware. Finalists.

Black Stars’ Glorious Run Ended by Cruel Hand of Fate
AFCON 2012: The Ghana players you may know, and some you may not