Barcelona: Tito won the 1st round of El Clasico

Traditionally the Supercopa de España is a pre-season Cup, similar to English Community Shield. Spaniards, though, usually take it more than a warm-up contest.  When the matchup is again unsurprisingly Barcelona against Real Madrid, it will not be merely a friendly contest.

This year, both teams have already played week one fixture.  Barcelona showed their determination in reclaiming the La Liga, while Los Blancos was caught out by the unusual early start of the season. Although no league points will be credited to the winning side in the Cup, a victory would represent a significant morale boost throughout the season. 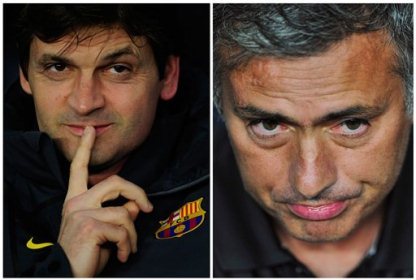 Neither teams were ready to give away the first leg. Adriano and Alexis Sanchez were preferred  over Jordi Alba and Christian Tello, given their experience in El Clasico. Gerard Pique started as the centreback partnering Javier Mascherano. The three substitutes who came in for Real Madrid on Sunday, Raul Albiol, Jose Callejon and Karim Benzema, all started in Camp Nou.

The storyline has not changed much since last year. There is no longer Pep Guardiola, but Tito Vilanova continues to let Barca’s excellence to flourish. The “false no. 9” formation continues to bring them dominance in midfield, particularly when Xavi and Iniesta have already hit top form in August. The question remains the absent forward to apply the finishing touch, when it has to be a very special long shot to beat Iker Casillas.

Jose Mourinho put his faith into the counter-attack approach, a no-brainer playing Barca at Camp Nou. The speedy Angel Di Maria could be a better option than Mehmet Ozil, who was the invisible man throughout the match without the ball at feet.

The sole advantage Real Madrid had earned throughout the first half was a Javier Mascherano’s yellow card awarded for blocking Fabio Coentrao’s fast break. On the other hand, their defence is growingly effective in stopping Barcelona. Barca’s passing was spectacular, but nothing more than long shots were allowed. Sergio Busquets were camermen’s favourite in 1st half, often found him rolling on the ground.

While Mourinho has not been once grumbling about the biased officiating towards Barcelona, it was a night which Real Madrid got the most out of it. Three deliberate fouls by Raul Albiol had only resulted in one yellow card. Alvaro Arbeloa’s post-hitting backward pass was regarded as a result of Alexis Sanchez’s foul from minimal contact. When the Spanish fullback obstructed Alexis in the box for a clear-cut chance, neither a penalty nor a second yellow was awarded controversially.

Couples of minutes after the controversy, Christiano Ronaldo bullied the weakness of Barcelona’s lineup with a bullet header from Ozil’s corner. With 35 minutes to go, the night seemed to be destined for Madrid’s victory.

Nevertheless, within ten seconds after kickoff, Mascherano’s pin-point pass released Pedro who broke the offside trap and equalised for the home team. Lapse in concentration for a single moment against Barcelona proves to be costly. 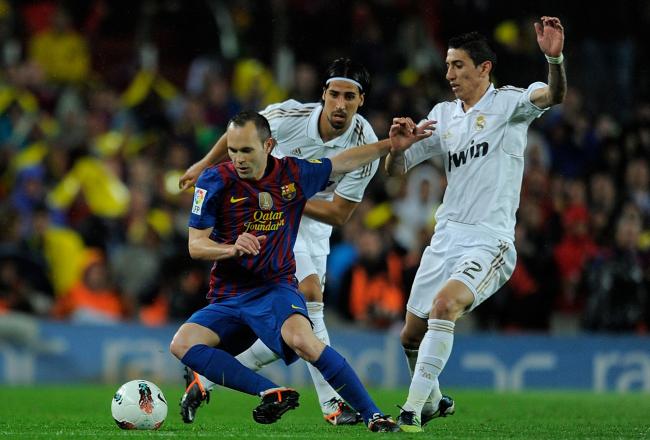 The rapid shift of momentum put Real Madrid on the back foot again. With Busquets dropping deeper, Pique and Dani Alves were encouraged to roam forward. Dani Alves cut back to his left foot in the box, but saw his decent effort saved by Casillas. A deja vu by Iniesta, though, teased Sergio Ramos, who denied the foul by helplessly shaking his finger after catching Iniesta’s foot. Messi did not miss the penalty this time and brought Barca the lead for the first time this match.

The introduction of Di Maria was well-anticipated, and the Argentinian winger should have caused his companion Mascherano being sent off. Barca’s luck continued when Ozil endured his dreadful night, having unable to control a long pass which could leave him 1-on-1 with Victor Valdes. In contrast, Iniesta starred in midfield. He skipped past the challenge of Sergio Ramos and assisted Xavi for the third goal with a delicate through pass.

The El Clasico always ends in dramatic fashion. Last year there was the eye-poking incident between Vilanova and Mourinho. This year, Victor Valdes became the centre of attention. The eccentric goalkeeper turned a straightforward clearance into an embarrassing goal and left the crowd exiting the stadium with a slight disappointment at the 3-2 scoreline.

Di Maria’s effort brought Real Madrid an important away goal, which a 1-0 marginal win next Wednesday will see Real Madrid seal the title. A moment of dreaminess saw Real Madrid surrender the lead, while Victor Valdes’ moment of carelessness could hand their rival a title and a mental advantage season long.