There’s been something a little placid about the Indomitable Lions in CAF 2010 thus far. As their name suggests, subdued qualification by the tightest of margins, hardly resembles an aura of unconquerable invincibility. But a saving strike from unlikely hero, Landry N’Guemo, has at least conceived Cameroon a platform. Whether they view themselves as just being happy to remain in contention or are now prepared to register a challenge will fuel debate. However, one certainty is the pedigree and modern romance their quarter-final opponents feel for this competition. An unprecedented three-in-a-row at stake, World Cup failure, three wins from three and a possible reunion with Algeria – Egypt are not suffering from motivational issues. The heartbreaking playoff defeat to the Desert Foxes has resulted in the backlash that was universally predicted. To end their championship reign will take the spirit and intelligence of champions, and certainly more than the post-match high of snatching qualification from under a Tunisian nose.

It doesn’t take a massive archaeological dig to find the last encounter of significance between these two. A late Mohamed Aboutrika goal saw Egypt emerge and retain CAF 2008 in Accra. And perhaps vengeance is where Cameroon can begin to find their inspiration. Another slaying by the Pharaohs is the last way they will want to be sent home.

To avoid this scenario the Indomitable Lions must turn this tie into a fight. Egypt are the tournaments form team and disrupting their fluidity, cohesion, then confidence, is Cameroon’s best avenue to progression. Star players, Samuel Eto’o, Geremi and Rigobert Song’s adjustment to battle will be paramount, plus in N’Guemo, Cameroon may have a new hero.

The jury is firmly out on manager, Paul Le Guen. His reputation has been on a downward spiral since leaving Lyon. The result of this fixture will be key to how his managerial tenure is viewed pre-South Africa. Whether or not he possesses the tactical qualities to turn a team that notoriously frets over sleeveless tops and one-piece kits into African champions will be rigorously assessed. 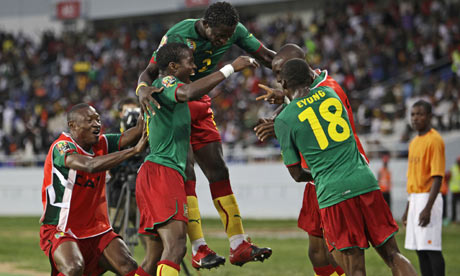 Egypt coach, Hassan Shehata, will have a fully fit squad to choose from for the quarter-final. He used the Benin match to rest Mohamed Zidan, Ahmed Fathi, Wael Goma and Sayed Moawad – all of whom will be expected to return for the Cameroon fixture.

Likewise, Le Guen’s men are all available for selection and with the Eto’o/Mohammadou Idrissou combination beginning to flourish he’ll be confident his team can score goals. It’s at the back where tighter security will need to be enforced.

Cameroon have already proved they have battling qualities after being behind in all their matches to date and still qualifying from the group. Facing-off against the tournament favourites is a different proposition altogether though. If an early set-back is suffered, an easy choice would be for Cameroonian minds to shift to South Africa. Form, confidence and motivation favour the Pharaohs.