Championship Preview – Who are you backing to win the league?

As a Leicester City fan I was recently very surprised to discover that a bookmaker had offered the foxes as favourites to win the Championship in the upcoming 2012/13 season.  This was ahead of Bolton, Wolves, Leeds, Blackburn and Cardiff who were given as the 2nd to 6th favourites respectively.

Despite a large input of money and constant statements of ambition from the Thai consortium currently owning Leicester, the 9th placed finish last season and inconstant results (Leicester didn’t record back to back victories until the middle of February) didn’t seem to give an indication that City would be tipped ahead of the teams relegated from the Premier league last season.

So far this summer boss Nigel Pearson has brought in 23 year old Ritchie De Laet and 20 year old Matty James from Manchester United in a combined £2 million deal and also striker Jamie Vardy (above) from Fleetwood Town in an initial £1 million deal. There have also been some high profile names leaving the club with former captain Matt Mills, who became Leicester’s most expensive defender only a year ago, moving to Bolton and fellow centre back Sol Bamba moving to the Turkish Süper Lig.

De Laet and James come with bright futures ahead of them, but with just a few loan appearances it is unclear as to whether they will be ready this season to be part of a title challenging team. Even more untested at this level is 26 year old Jamie Vardy. Whilst his goal record in his career so far speaks for itself the fact he hasn’t previously played above Conference level means his purchase is potentially a gamble. However if Nigel Pearson can get him to reproduce some of his displays from the FA cup last season and also get goals out of him then he could form a good partnership with David Nugent up front.

There is definitely ability in the Leicester squad, with players such as Kasper Schmeichel, Paul Gallagher and the reinstated Sean St Ledger. However question marks still remain over the defence and also sometimes a potential lack of goals, with £4 million January signing Jermaine Beckford (above) not having the best part of his career over the last half of the season.  It is therefore debatable if our squad matches up to that of Bolton, Blackburn and Wolves, who appear to be following West Ham’s example from last season and trying to keep hold of big name players in hope of a quick return to the top flight.

Bolton manager Owen Coyle has publicly declared he will fight to keep Mark Davies and Lee Chung-yong and promising goalkeeper Adam Bogdan at the club. The acquisitions of the experienced Keith Andrews (below) and Matt Mills will also certainly strengthen their title bid. It is unclear the impact that the departure of top scorer Ivan Klasnic will have on their ability to score goals but a step down to the championship may help David N’Gog . It may also provide more opportunities for January deadline day signing Marvin Sordell who has experience at Championship level from his time at Watford. Captain Kevin Davies will also be keen to show he still has much to offer the club. 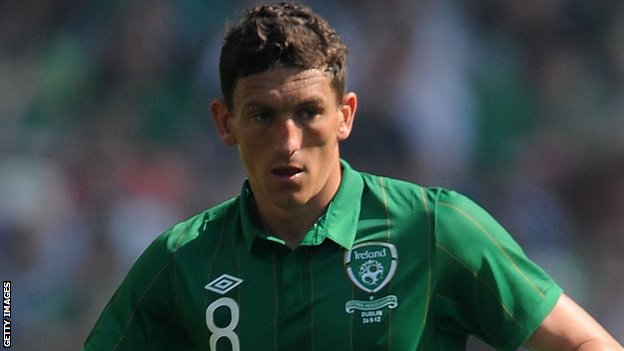 After Yakubu’s departure to the Chinese super league Steve Kean has moved to increase Blackburn’s fire power by bringing in Leon Best (below) from Newcastle and he has also opted to provide vastly experienced 36 year old Portuguese striker Nuno Gomes with his first spell in English football. Keeping hold of the experienced Morten Gamst Pedersen and David Dunn as well as bringing in Danny Murphy will help provide a solid midfield unit which is so important in order to be competitive in the Championship. A downside is that it looks like a tough struggle to keep exciting young players Steven N’Zonzi, Junior Hoillet and twin brothers Martin and Marcus Olsson at the club. However there may be some positive news, as despite being linked heavily with a move to QPR Steve Kean announced today that he is hopeful of keeping Hoillet at the club. Whilst they have a capable goalkeeper in Paul Robinson if he stays, an area where Rovers possibly need to strengthen is in defence. The defence certainly looked shaky at points last season and whilst they may no longer be up against Aguero or Rooney there is still alot of good attacking talent in the league.

Wolves have so far been more reserved in bringing in new players. Frank Nouble has signed on a free transfer after having a lack of opportunities at West Ham and forward Björn Sigurðarson has also moved from the Norwegian League for a fee reported to be around £2.4 million. The most significant change at Molineux has been the introduction of new manager Stale Solbakken (below), who most recently had a short stint at FC Cologne in Germany.  It’s certainly a brave new appointment and Wolves fans will hope that he can recreate the successful spell he had at FC Copenhagen in which he led the club into the Champions League and to various domestic titles. Solbakken has accepted that it is likely some key players will leave, but the rejection of a bid from West Ham for Matt Jarvis supports Chief executive Jez Moxey’s reassurances that players won’t be leaving on the cheap. Even if a few key players do leave the Wolves team certainly has enough quality to challenge next season with the right tactics and management. Whether Roger Johnson will be around or not is still unclear but if Solbakken can get him focusing on football again then he potentially has alot to offer in the Championship.

Therefore it certainly seems like the Championship is going to be an exciting prospect next season. There is also still likely to be alot of transfer activity over the next 5 weeks to create excitement over the rest of the summer. I may still put a bet on Leicester at 7/1; I just can’t tell if it’s my head or heart that’s telling me to do so.