How Things are After Christmas in the Premier League

The Christmas and New Year Fixtures (CNY) have always been an entertaining time for the English Premier League. This year the teams have had to play 4 matches from 21 Dec to 4Jan (15 days!). It’s a test to the squad depth; it’s a test of man management; it’s a test of strategies. So how have the league table changed so far? Is fate decided?

Man City recovered from the goalless draw away at The Hawthorns and the frustrating loss to Black Cat with a 3-0 win against Liverpool, but Roberto Mancini will have to worry about the absence of powerhouse Yaya Toure as well as exhausting the proven-indispensable David Silva. Man Utd have undone their brilliant effort against Fulham and Wigan with consecutive losses to Blackburn and Newcastle. Fergie would hope their long list of injured players could return to fitness soon and re-challenge their noisy neighbours. Spurs may have numerically trimmed their deficit with the Manchester Clubs, but they may find it difficult to keep up with the summit after the weary CNY campaign, although European football is all they are yearning for. 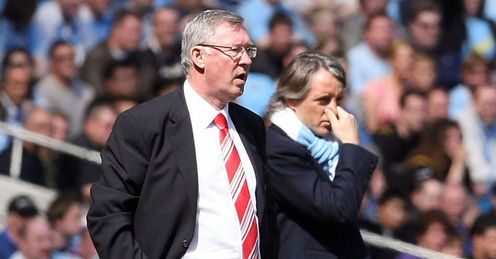 Ferguson (left) and Mancini concluded 2011 with mows and moaning

Chelsea continues to disappoint with consecutive draws and an ugly loss at home against Aston Villa. When Drogba and Kalou returns from the ANC, the Blues may have already drifted away from 4th. Arsenal remains at the 5th place after picking up 7 points and more injuries at the back. Their goal-scoring form, Van Persie in particular, has cooled but the return of King Henry and perhaps more new faces are expected to boost Arsene Wenger’s young squad. Liverpool disappointingly drew against relegation candidates Wigan and Blackburn, collecting only five points in CNY and it would be intriguing to know whether the return of Gerrard could compensate the long suspension of Suarez as Kenny Dalglish’s side vies for a top 4 finish. Newcastle closed out the CNY period with a 3-0 victory against Manchester United sitting just below the Kops at 7th. The missing of Demba Ba would be their only downside in the chase of European football.

Martin O’Neil took over Sunderland and helped them amass an impressive 11 points from the CNY fixtures, stunning Chelsea and hammering Wigan en route to 10th. Fulham have recovered from the miserable Europa campaign and managed to steal four points from Chelsea and Arsenal, despite losing heavily at home to Manutd. Swansea are also charging up to the top half as they finish the CNY with their first away win against Aston Villa. QPR have found themselves next to the relegation zone having only collected one point in four matches. Warnock will hope he could secure more signings than Macheda in January to prevent a return to the Championship. Mick McCarthy’s Wolves sit on top of QPR by GD but may find themselves in the bottom 3 soon following the suspension of Milijas and losing playmaker O’Hara to injury if they don’t start improving their home form.

Steve Kean saved his job by getting four points at Anfield and Old Trafford, but Blackburn are stuck at the bottom of the table and are still far away from safety. Retaining the service of Christopher Samba will boost their chance. Bolton grabbed a massive seven points in four matches and is only one point away from QPR, although they will be almost certainly losing their captain, who scored the winning goal against Everton. Wigan would have much to think about their goal-scoring ability as the goal difference might turn out crucial should they still be in the relegation zone for the 2nd half of the season.

Kean, I don't think you have enough fingers for your league position