CSKA to strong for brave Derry 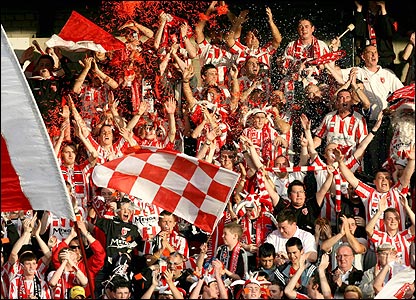 Derry City’s Europa League dream died at the Brandywell as they were unable to turn round a first leg deficit against top Bulgarian outfit, CSKA Sofia.

The visitors, who have reached two European Cup semi-finals in their history, managed to combine a wonderful array of pace and technical ability to ensure their passage to the final qualifying round.

However, backed by a sell-out 3000 crowd, Derry stood firm for long periods against the slick Eastern Europeans without ever threatening to overhaul last weeks 1-0 defeat.

The match began at high intensity when a swerving shot from long range by Pavel Vidanov signalled CSKA’s intent but Derry keeper, Gerard Doherty, did well to make the save.

Then, on the half hour a curling free-kick from Todor Timonov was also dealt with by the Derry keeper as the visitors continued to dominate.

Seconds later the Bulgarians lost their keeper, Zdravko Chavdarov, to injury following an accidental collision with Kevin Deery as both players challenged for the high ball.

CSKA continued to look the more likely and as half-time approached Derry skipper, Peter Hutton, lost possession deep in his own half. This allowed Timonov to play in Ivan Stoyanov, but his attempt sailed over. Doherty was certainly the hero for Derry in the opening period and he produced another point-blank save from Stoyanov right on the referees whistle.

The Irish side could count themselves fortunate to still be in the tie at the break, but you got the feeling they would need to be more adventurous as the game progressed.

Chances were at a premium after the restart and it took until the hour for the first real opportunity to present itself after another mishap in the Derry defense. With Clive Delaney unable to control a high ball, Marcos Malachias unleashed a superb volley, only to be denied by a magnificent fingertip save by Doherty.

In the 69th minute, the Bulgarians ended this tie as a contest when they added to their 1-0 first leg lead with a crucial away strike and it was the lively Malachias who did the damage.

Awarded a free-kick 40 yards from goal, the Brazilian drove a low ferocious curling shot into the bottom corner of the net much to the delight of the traveling band of CSKA supporters.

The strike ended the tie as a contest as Derry now needed to score three goals in order to progress.

To be fair, the Candystripes tried hard to dig the game out of the fire and in the 82nd minute they gave their supporters something to cheer about.

A Higgins free kick was floated to the back post and when Tam McManus headed the ball back across the face of goal the unmarked substitute, David Scullion, headed home from close range to level the score on the night.

But Derry’s woes were compounded with just four minutes remaining when Gareth McGlynn brought CSKA substitute, Orlin Orlinov, down as he broke forward and the Belgian referee produced a red card. 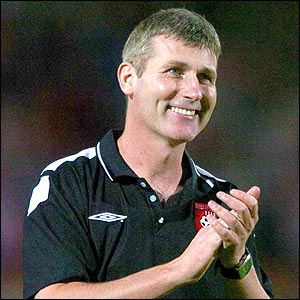 Afterwards a disappointed Derry manager Stephen Kenny reflected: “I’m not interested in any moral victories or anything like that — we aren’t pleased just because we got a draw. CSKA are obviously a step up for us but it didn’t mean we couldn’t win the game.”

The result will be a financial blow to the Candystripes, who would have at least targeted the final playoff round of the competition. They currently lie fourth in the Irish League, nine points adrift of leaders Bohemians and a return to the European stage next season looks a difficult task.