England and the rise of the ‘Heskey role’ – glorious throwback or the nation’s future?

It’s something of a puzzle that, though Emile Heskey’s performances for England were so often criticised, his contribution was considered so effective that an entirely new position seems to have been created purely off the back of the striker’s displays for his country. The ‘Heskey role’, as it has been dubbed, now seems to be the linchpin around which Fabio Capello moulds his team, and in the build up to tonight’s clash with France, all the speculation had been on which of the Premier League’s more suitable forwards would step into Heskey’s sizeable boots, now that the Aston Villa forward has bowed out of international football.

It appears Newcastle United’s Andrew Carroll will be trusted with the task, though question marks remain over his fitness, with the much-maligned Carlton Cole waiting in the wings should Carroll’s injury force him out of the fixture. Carroll’s goal-scoring record and form in the Premier League this season merit his inclusion, and in recent weeks he has demonstrated the strength and link-up play that are so crucial for the position. 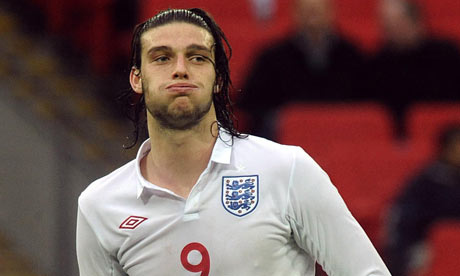 Of course the ‘Heskey role’ is not an entirely new phenomenon, just the subject of recent media spin. Indeed England, and English sides, have used the archetypal ‘big man’ up front for generations, and the classic number nine and ten relationship is deeply ingrained within the nation’s footballing identity. From Alan Shearer and Michael Owen to Roger Hunt and Geoff Hurst, it is a setup that England have relied on some variation of for decades. The difference, of course, was that previously the focus was always on the bigger and stronger number nine to score the goals. This has changed with the advent of the ‘Heskey role’, as this forward is now used primarily to bring others into the game, with the number ten, in England’s current situation Wayne Rooney, now the chief goal-scoring threat.

The classic number ten is disappearing however. Rooney represents perhaps the last incarnation of this dying breed, with Wesley Sneijder maybe the only other example of a modern day number ten in the apparent prime of his career. Today the focus is on creativity coming from a new breed of attacker, the wide forward, such as Lionel Messi, Arjen Robben and Cristiano Ronaldo, or from a deep-lying play-maker such as Xabi Alonso, Xavi Hernandez or Andrea Pirlo. This evolution in the way teams look to create attacking play has seen many countries simply consign the 4-4-2 setup to the ranks of footballing history. If we take the World Cup in South Africa this summer as an example, none of the sides who made it to the semi-finals used anything even remotely resembling a 4-4-2 system. Spain, Germany and Holland all found success with a 4-2-3-1 (though the Dutch setup could also be interpreted as an asymmetrical 4-2-2-2), and Uruguay dazzled with their South American 3-5-2. Big forwards bringing others into play though was very much a feature of the tournament. Within the semi-finalist’s formations we can even find examples of strikers operating in the ‘Heskey role’, with Germany’s Miroslav Klose perhaps the best example. The focus point of a fluid 4-2-3-1 formation, the presence of three attacking midfields behind Klose maximised the effects of his link up play, particularly as Lukas Podolski, Mesut Ozil and Thomas Muller looked to break from their position and get beyond him. The combination of a well deployed lone centre-forward with plenty of support, and the presence of a deep lying play-maker in Bastien Schweinsteiger, meant that Germany were the most attacking and exciting team at the World Cup. The success of the Dutch too was partly down to Robin van Persie’s ability to play the ball off to the supporting Sneijder, or out wide to Robben who constantly looked to run at defences, despite the injury that limited his impact. Even Spain, with all their creativity, sometimes used a similar approach when Fernando Torres played through the middle and David Villa went wide, though Torres’ own poor form made this option less desirable for Vicente del Bosque.

There is nothing fundamentally wrong with the 4-4-2 system however. Part of England’s problem is that in this day and age almost all the developed footballing countries have the tactical awareness, increased player fitness and strength of depth to nullify this approach to the game, if it is not used effectively. England’s last outing against Montenegro is a perfect example. Zlatko Kranjcar’s men silenced the home nation with a five man midfield, and designated Milorad Pekovic to drop deep from that midfield and pick up the runs of Rooney. Under such close attention the forward didn’t benefit from the space sometimes found in front of the defence and was completely ineffective. Peter Crouch, isolated against two centre-backs, was barely involved, and England lacked the quality on the flanks to provide the striker with any decent service. By playing a left-footed winger on the right and vice-versa, Capello simply encouraged his wide men to cut inside and into the congested midfield, making it even trickier for them to create anything. Even if the wingers had been deployed differently and encouraged to hug the touchline, and the quality of the ball played to Crouch been of a higher standard, the Montenegrin’s man advantage would still have made the striker’s work very difficult. 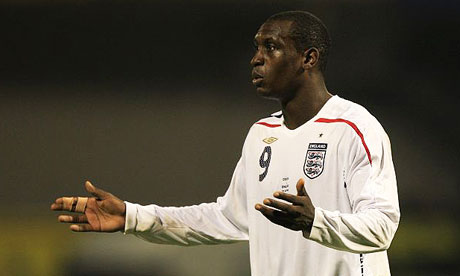 Though Heskey was criticised for his lack of goals, no other English player has performed as well in his role

Heskey’s poor international goal-scoring record unfortunately made him something of a scapegoat. But as the Germans and Dutch showed, the utilisation of the ‘Heskey role’ is also not the problem for England. The issue for Capello is fitting the role into a 4-4-2 system. England lack wide forwards of the quality of Messi, Robben, Ronaldo, or a deep lying play maker of the ilk of Xavi, Alonso or Pirlo to supply their strikers. Whilst other countries have evolved, England’s creative force is still the number ten.

Capello’s problem is further compounded by the specific 4-4-2 system he utilises. With Rooney in the side, it frequently compacts to a 4-5-1, as the Manchester United forward drops deep to receive the ball. This is too often attributed to Rooney’s supposed tactical indiscipline, when in reality the problem is that Rooney is being incorrectly deployed within a system that renders his role frequently ineffective. As Rooney drops deep and the remaining forward becomes isolated, the chance for the striker operating in the ‘Heskey role’ to link play is lost as, quite simply, there is no supporting players for him to supply. England’s lack of quality wide players, or attacking midfielders who look to break beyond the centre-forward, frequently render the use of a big striker performing the ‘Heskey role’ useless. The clamour amongst most pundits, commentators and fans in South Africa was for Capello to move Gerrard into the middle, and play him just behind a lone front man. Had this materialised, with Gerrard looking to break beyond Heskey, or even beyond Rooney who could have played in an adapted centre-forward role as he did so successfully for his club last season, then perhaps England’s fate this summer could have been very different.

English teams are still keen to develop young players in the Heskey mould. A significant degree of emphasis is placed on young players developing physically, with smaller, often more technically gifted players being overlooked. If England are to progress and achieve their aim of winning a major international tournament then the focus has to be shifted onto nurturing other types of attacker. Theo Walcott, Daniel Sturridge and Nathan Delfouneso are all examples of young English forwards with the necessary talent to break through, yet all differ from the typical big number nine. As simple as it sounds, fitting players such as these into a system that will get the best out of them is the way forward, whether this in combination with a larger centre-forward or not. Sadly, Capello shows few signs of agreeing.

England – Capello Gets It All Wrong Again
“Next manager will be English,” says FA