RANGERS will return to the competition in which they reached the Final in 2008 after confirming their place of 3rd in the group after a 1-0 defeat from Manchester United at Ibrox.

The Europa League was of course known as the UEFA Cup when Walter Smith took his troops on a fantastic run to the final in Manchester, after finishing third in their Champions League group that consisted of Barcelona, Lyon and Stuttgart.

Rangers will be hoping that is a positive omen for them as after last night’s cruel defeat at the hands of the Red Devils they find themselves parachuting into UEFA’s secondary competition again. 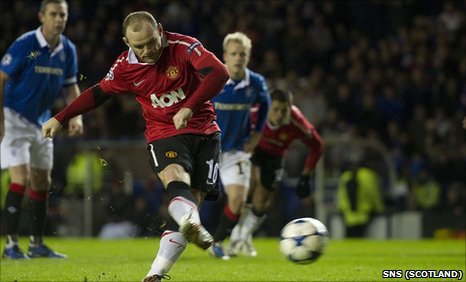 Wayne Rooney’s 86th-minute penalty winner was harsh on a Rangers side who had held the three-time European champions to a draw for 85 minutes with a fairly depleted squad. Sasa Papac, Maurice Edu and Madjid Bougherra were all missing through injury and would easily have been playing in the starting line-up if they had been fit.

Kyle Lafferty broke a bone in his hand at Wednesday lunchtime to add to Smith’s injury woes and further emphasise the need for investment to strengthen the squads depth.

The game last night was rather uneventful, with a poor miss by Kenny Miller in the first half the only real opportunity for the home side. Sir Alex Ferguson’s side made McGregor make a good few saves but never threatened the way we know they can with talent such as Rooney, Berbatov and Scholes.

Steven Naismith’s challenge on full-back Fabio gave United the penalty and ultimately the victory they wanted, although they only needed a point to gain qualification to the last 16 of the competition.

Rangers have a long trip to Turkey in the final group game, with Bursaspor nursing a 6-1 defeat at the hands of Valencia in the other game last night. The way the seedings for the EL draw work, Rangers will have to get a good result there to be seeded for the draw in December.

If the reports are true that Nikica Jelavic will be ineligible for the campaign, it adds more worry for the Glasgow giants. With investment in the shape of transfer funds unlikely to come in January, Smith will have to go with what he has got.

If he has main player available, Rangers not need worry about challenging on four fronts. This squad is very capable of delivering. They know how to win titles, how to comeback from losing a game (they have done this to six teams in the SPL so far!) and have the mental strength to cope with playing Thursday nights then a Sunday afternoon.

The problems begin when injuries and suspensions kick in. Missing Edu, Boogy and Sasa was huge in terms of the result last night. Kyle Hutton was superb in midfield and Ricky Foster had a decent game, but these players influence the team and help drive them on. It was evident last night we did not have self-belief to take United on, to attack more and create chances.

Manchester United have not been impressive this season although they are undefeated, and if we had that trio playing I have no doubt the result would have been different.

It will be interesting to see who we get in the last 32 of the Europa League, and if we are seeded or not. Can we stay clear of more injuries/suspensions and go on another legendary run in the competition and remain the top dogs domestically? I certainly hope we can. Just to add for anyone interested, the final will be in Dublin on May 18th 2011. That is inspiration by itself for this team to make it all the way.