Nobody has forgotten what happened on the 21st of November, 2007. The awful weather, Scott Carson’s howler, even the wally with the brolly. It was a dark, dark day of English football; the sky overhead as black as the mood of every English fan who watched the game in a kind of stunned stupor. This wasn’t the “new England” Steve McClaren had promised. This wasn’t a courageous, gutsy performance. This was rubbish.

One of the most infamous images of modern English football.

Fabio Capello doesn’t want to see a repeat performance against Croatia. England might be top of Group 6 and seemingly home and dry (regardless of Wednesday’s result) but a win over Croatia at Wembley would bring closure to that sickening period of English football. Therefore Capello will lead England into a friendly with European outfit Slovenia in an effort to maintain his players fitness and also experiment with a couple of formations against a team who closely resemble Wednesdays opponents.

Slovenia might be ranked 51 places below Croatia (and 53 places below England) but they play in a style similar to that of Slaven Bilic’s men; West Brom’s Robert Koren is their string pulling midfielder (a la Luka Modric) and Zlatko Dedic certainly doesn’t mind putting himself around, in a style similar to the infamous forward whose goal helped crush England’s European Cup dreams- Ivica Olic. FC Koln captain Milivoje Novakovic will also need to be watched closely if started.

Koren- vital for both WBA and Slovenia.

Capello is expected to name a strong squad to face Slovenia, and he has a number of options. England are expected to line up in a traditional 4-4-2 formation, with Ashley Cole and Glen Johnson in the full back positions and John Terry at centre back. There are a multitude of possible partners for Terry, (Brown, Cahill and Upson are all possibilities) but Joleon Lescott might get the nod. England are also strong in midfield, either Wright-Phillips or Lennon will start on the right but both will probably get a run out, with Lampard and Gerrard in the centre. Ashley Young will start on the left and James Milner and Gareth Barry are also in the squad, so expect the Enlgish midfield to change before the game is up.

Much has been made of Jermain Defoe’s electrifying Premier League form and he is expected to start alongside Wayne Rooney with Emile Heskey, Carlton Cole and Peter Crouch providing cover. This is a big chance for Defoe, after his brace against Holland many are touting him as the ideal foil for Wayne Rooney, who won’t always score goals but guarantees a big presence up front. 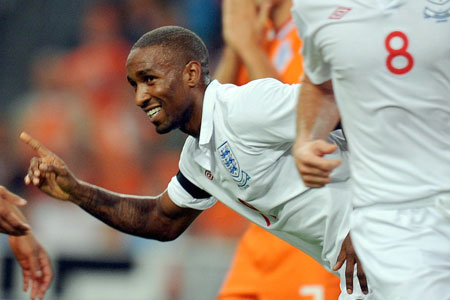 Defoe’s double saved England against Holland and he now has an excellent chance to book his ticket to South Africa.

Many fans are expecting a big England win but Slovenia won’t roll over too easily. They are currently 3rd in Group 3 (the same group as Northern Ireland), and they are still in a good position to qualify. They will give England a tough game, though on paper England’s superior squad will surely certify a win. This is international football though and a shock could lie in store for the Three Lions. It’s just not that likely. Therefore I”m predicting England to triumph 3-1.