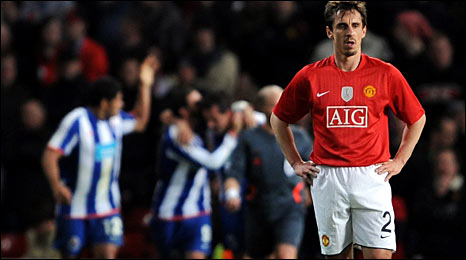 A shattering blow as a somewhat underestimated Porto team left it late to find a crucial equaliser, and what may be the most influential goal of the tie.

With Anderson and Rio out injured and Giggs, Gazza, and Kiko waiting on the bench it was no surprise that United started on the back-foot where a combination of poor defence and pure skill on behalf of Christian Rodriguez left United with an immense uphill struggle, leaving the Stretford end gasping for words, and what seemed like another long evening for the 75000 strong capacity crowd.

Sir Alex made four changes from the side that featured in the 3-2 thriller against Villa with Rooney, Vidic, and Scholes all back from suspension and Park to replace the tired Ryan Giggs. But with only 2 days, it was already a physically demanding task. 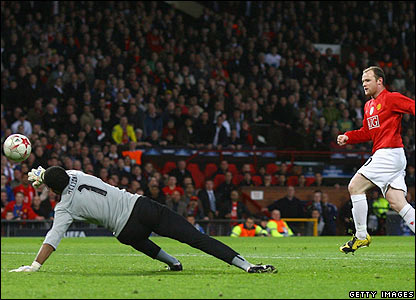 So at 1-0 down with 85 minutes to turn it around United had it all to do, and with the away goal conceded the reds needed something uplift them. The first chance arrived on the 13th minute where John O’Shea’s deflected cross gave United the games first corner, which Rooney drilled into the box to find an eloquently struck volley by Cristiano Ronaldo, forcing Helton into a spectacular reflex save.

With united probing deeper into the heart of the Portuguese Side, the Old Trafford Faithful only had to wait 2 minutes to see their side inject a bit of passion back into the game. This came in the form of some excellent quick thinking, and reading by Wayne Rooney who pounced on a horrible back pass by Bruno Alves, to bring United level with a curved dink round and over the keeper.

But Despite the goal the Reds play still seemed hesitant. With Porto’s strike partnership Rodriguez and de souza (aka HULK) running all over the defence, it was evident that United’s backline seemed disorganised, and shaky to say the least, without vice-skipper Rio to bolster the ranks, and it seemed that United would be lucky to head into the tunnel with a draw.

However, before the break United showed signs of promise with a Fletcher volley, blocked bravely by Cissokho, and a header just eluding Paul Scholes, United headed into the dressing room with a more positive outlook.

After half-time, with the words of the manager fresh in their minds and reverting back to the good old 4-4-2, the players looked more determined and organised, however you felt th game still lacked that little bit of control.  This altered somewhat when Fergie decided to bring on Giggs for Park whose night had been slightly reserved. Who had an immediate impact with a dangerous left-footed free-kick just wide. This seemed to bolster United’s performance slightly with more fluidity and passing ability.

However nothing could have prepared the United faithful for a fantastic inch perfect chip/shot, 20 yards out by Wayne Rooney, producing a panicked save by Helton. This re-imbued United’s character, with the resulting corner catching a fierce header by Nemanja Vidic just about parried by Helton, keeping Porto in the game.

But Porto had chances of their own with Lisandro forcing a fingertip save out of Van der Sar, and Cissokho going for glory with a powerful 30yard strike which Van der Sar managed to hold on to.

However neither team could break the deadlock, and with 20 minutes on the clock, Sir Alex made his final two changes; Tevez on for Scholes, and Neville on for an injured Jonny Evans.

United pressed on for the win with Neville teeing up Rooney for what should have been his second goal, but the striker couldn’t get his head on Gazza’s dream cross, and with 10 minutes left, the game seemed to have reached a stalemate.

But Rooney’s quick thinking yet again seemed to have rescued United, with a Gary Neville long throw, an inspired flick by the number 10 and a rocket volley by Carlos Tevez, it seemed like United were home and dry with only 4 minutes remaining on the clock.

But Porto were not to be denied, and 2 minutes after United had taken the lead, it was snatched away by a Lisandro fizzed cross, past the heads of the United defence leaving Mariano to administer a crushing blow to the Reds Champions league campaign.

Man of the Match:Cristian Rodriguez, caused United’s defence all sorts of problems, and in the end we were glad to see the back of him when he got subbed off