In a match in which a nation, a continent, and most of the rest of the world were supporting Bafana Bafana, Uruguay rose to the occasion and upset the hosts at their own party. A marvellous strike from Diego Forlan gave La Celeste the lead, before the Atletico man scored from the spot to put the game beyond doubt. Alvaro Pereira then sent the vuvuzelas into a complete state of stunned silence as he added a third late on, meaning South Africa will have to beat France and have other results go their way to have the slightest chance of progressing.

Carlos Alberto Parreira was left with a sour taste in his mouth, after seeing his goalkeeper Itumeleng Khune dismissed in the second half. “We all think this was the worst referee of the competition so far,” he said. “He gave fouls that were not fouls, yellow cards that were not yellow cards, and then he leaves the field smiling. I hope we won’t see his face again. I even laugh at the suggestion that Uruguay maybe won this game thanks to the referee, because I think we dominated the game throughout.”

Whilst the three goal margin may not fairly reflect the game, I don’t think anybody can deny La Celeste the victory. From the start, the two-time World Champions looked more positive and fluid than they did against France. Diego Forlan seemed to relish the deeper role, and the freedom that it brings, and Luis Suarez looked sharp, making darting runs to trouble the South African defence.

Forlan then proved why he has been so important to Atletico Madrid in recent years, as his 25-yard shot dipped just under the bar, rendering Khune a mere passenger. Replays showed the shot took a deflection, but the shot looked destined for the net even before it rose via the head of Mokoena. In the early stages of the match, Uruguay were enjoying the kind of dominance Mexico held when they faced South Africa, but unlike the Mexicans, Forlan and Suarez looked capable of carving out chances from nothing and always looked dangerous and clinical.

Bafana Bafana grew towards the end of the half, but seemed to offer no real threat to Muslera’s goal. Mphela was given the arduous task of being the lone front man, and was offered no real support. And when he started to drop deeper, any goal was ruled completely out of the question. Siphiwe Tshabalala had their best chances, but never looked like recreating his goal against Mexico, and looked slightly overconfident and selfish, skying each of his efforts.

Uruguay went into the second half with a similar confidence to their play. Suarez was creating chances, and got his just rewards when Khune brought him down inside the box. The Kaizer Chiefs ‘keeper was dismissed as a result, but the South African players continued to protest. Suarez was not offside when the initially ball was played, but Cavani appeared to help it on its way, by which point the Ajax man was a yard ahead of the last defender. Moneeb Josephs was charged with the role of keeping out the penalty, coming on at the expense of Steven Pienaar, as the protests fell on deaf ears. But Forlan refused to be fazed by the long wait, and convincingly fired the ball into the roof of the net for his second of the match. 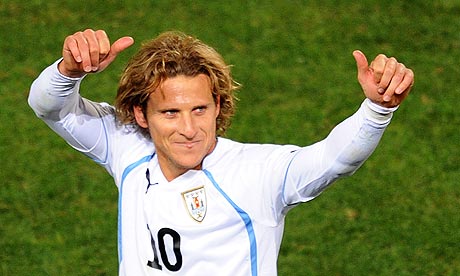 The penalty and subsequent red card really killed the game off, and an ever decreasing crowd watched on as the hosts looked less and less likely of a comeback. And Pereira rubbed salt in the wound towards the end, as he got on the end of a neat ball across the goal line from Luis Suarez. The result means La Celeste have taken one giant step towards qualification, and after Mexico beat France, a draw would see both teams through without too much bother. For the hosts, defeat by such a big margin means they will need nothing short of a miracle if they wish to make it through.