FIFA World Cup 2010 qualification doesn’t resume for France until mid-August, so as the more geographically able of you will have worked out from the title (hint: Nigeria isn’t in Europe), France take part in an exhibition match tonight.

Will the French team do their country proud tonight?

Under fire French manager Raymond Domenech is likely to be grateful for tonight’s friendly, even if the fatigued players are not. Domenech has come in for some criticism regarding his recent squad selection, and the game tonight will provide the perfect opportunity for him to maybe experiment with a new formation and try some players in new positions. France also take on Turkey on June the fifth; a squad for both games was released a few days earlier.

The match will take place in Saint-Étienne, in eastern central France. The most successful regional club, Association Sportive de Saint-Étienne Loire (or AS Saint-Étienne for short), are one of the most accomplished teams in France, having won the French first division 10 times. Their stadium, Stade Geoffroy-Guichard, will host tonight’s game. One of the biggest surprises in Domenech’s 25 man squad is the selection of Chelsea winger Florent Malouda. What’s so surprising, I hear you ask? After all, Malouda is a cultured and effectual player, performing solidly- if not spectaculary- for Chelsea over the last few months. Well, after the disastrous Euro 2008 championship, Malouda and Domenech had a well publicised falling out, and many assumed that the 28 year old had played for his country for the last time- unless Domenech was sacked. Domenech was reportedly, and understandably, furious with Malouda after the player slammed him over his “negative tactics” and “poor decisions”. However it seems Domenech has been unable to ignore Florent Malouda’s good form.

“I always said that if the players weren’t picked, it was because their form was not good enough or others were better than them. That was Flo’s problem,” Domenech told the French media.

“When players perform, they are called up. We’ve been watching him.Veteran midfielder Patrick Viera is another surprise inclusion. The former Arsenal ‘skipper turns 33 in 21 days time and with a host of young French midfielders performing well (19 year old Moussa Sissoko, 20 year old Étienne Capoue and 21 year old Marvin Martin to name just three)- many were surprised at his addition. Viera told the media of his “pleasure” at being selected. Viera has played no 2010 World Cup qualification games so far, and didn’t appear during Euro 2008. However, the inclusion of Viera and Malouda will add some much needed experience to the French midfield; surprisingly (well, at least in Viera’s case) it could also add more of a goal threat to the midfield. Malaouda’s 3 goals and Viera’s 6 aside, the other midfielders only have one solitary goal between them.

Loïc Remy is set for his first ever French senior team appearance, whilst the French league’s top scorer, Andre-Pierre Gignac, is also included.

Recently relegated Newcastle’s Obafemi Martins will look to make up for his recent poor from by netting against Les Blues, and the speedy forward will likely be paired with veteran forward Nwankwo Kanu.

FA Cup finalists Joseph Yobo and John Obi Mikel have both been called up, whilst Kalu Uche has joined up with the squad after recovering from a late injury scare.

Joseph Yobo will ahve to recover from his F.A Cup heartbreak

Nigeria face Kenya in a crucial World Cup qualifier on Sunday, so will probably rest some players.

The young lyon forward has dissapointed in his recent French national team outings, and many are beginning to worry that he’s not capitilising on the early promise he has shown. Nevertheless, he is still a formidible opponent for any defender. Benzema is likely to play in a direct style with Henry and Ribery playing off his shoulder. It will be Yobo’s job to stop Benzema’s attacks and the Everton defender will have his work cut out. However Yobo has been in great form for Everton and will relish testing his strenght against Benzema.

MY PREDICTION: JOSEPH YOBO. There’s no doubt that Benzema is a quality player, but I think Yobo is playing well enough to keep him quiet.

Boumsong is not one of France’s better defenders, but Domenech seems to rate him. The former Newcastle defender will be marking a current (but probably not for much longer) Newcastle striker. Martins is a quality player but has had his head down in Newcastle’s last few matches and hasn’t been playing well.

MY PREDICTION: JEAN-ALAIN BOUMSONG. Boumsong might not be the best defender in the world, but he should be able to keep a dis-heartend Martins quiet.

Franck Ribery is one of the best players in the world and, if you believe everything you read, could be heading to Real Madrid an a record-breaking transfer record. Monaco’s Sani Kaita will be tasked with hassling Ribery and not letting him dictate the play from the middle of the park- a very hard task.

MY PREDICTION: FRANCK RIBERY. Simply put, when he’s in form there’s very few players that can keep Ribery quiet. Sani Kaita isn’t one of them.

Whilst tonight is only a friendly, Domenech finds himself under a constant barrage of pressure, and the often fickle French fans will expect a win. Domenech is likely to field a strong, attacking team whilst Amodu will want to rest some key players for the forthcoming clash against Kenya. Expect Nigeria to settle for a draw. 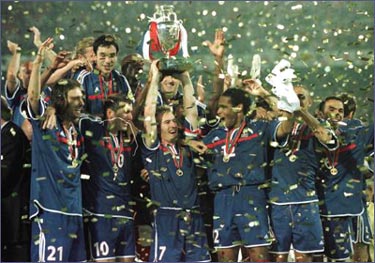 It looks like Nigeria will play a slightly under strenght team as they face a crucial game on Sunday, but I’m not predicting a walk in the park for France. Nigeria are a tough, physical side and France haven’t played that wonderfully in their last few outings. I’m going for 3-1 France, but I think the game will be closer than the scoreline suggests. I’m going for France to go two up thanks to Ribery and Henry goals, Martins to get one back and Sagna to make sure of the win.