A new generation of Black Stars

Ghana’s squad is one of the youngest in the competition and vastly different from the squad which travelled to Germany in 2006, but the 23 players selected by boss Milovan Rajevac are more than capable of springing a few surprises in South Africa.

The absence of Michael Essien is a huge miss for Ghana, as it would be for any other nation. Essien is one of the world’s top midfielders and a driving force in Ghana’s midfield. Not only is Essien absent, but Sulley Muntari, who defied previous team curfews and then refused to apologise (a decision which cost him his place in the African Nations squad), has lost his place in the side and is likely to be on the bench throughout the tournament.

Alongside Muntari on the bench will be former captain Stephen Appiah, who has suffered a torrid time with injuries over the past three years. Appiah is in the squad more for his role as a leader and Ghanaian legend than his current form, as Appiah only played a couple of competitive games this season.

This means that none of Ghana’s formidable midfield trio from the 2006 finals are likely to be in the starting line-up this time around, and in their place are a crop of up and coming stars.

Ghana have selected 15 players who are 24 or younger going into the World Cup. Of those players, 12 have made their international debut since the last World Cup, meaning experience is thin on the ground going into these finals.

What the young Ghanaians lack in experience they make up for in promise; many of these young players were instrumental in Ghana’s run to the final of the African Nations Cup in January.

Four of their starting line-up in that final; Samuel Inkoom, Isaac Vorsah, Andre Ayew and Kwadwo Asamoah, are 21 or under, and all four of them could well start for Ghana in the first Group game against Serbia.

The starting goalkeeper is likely to be Wigan Athletic’s Richard Kingson, one of the few experienced players in the squad and his country’s most capped player. His two backups have two caps between them, so Ghana will be hoping Kingson maintains fitness and form throughout the World Cup campaign.

Ghana will be relying on the experience of Kingson and defenders John Mensah, Hans Sarpei and John Paintsil to provide stability and leadership to the youthful line-up in the absence of Essien, Muntari and Appiah.

The team’s main goal threat is a familiar face. Asamoah Gyan, although only 24, has been a mainstay in the side since his debut in 2003 and scored his country’s first ever World Cup finals goal in Ghana’s game against the Czech Republic in 2006. 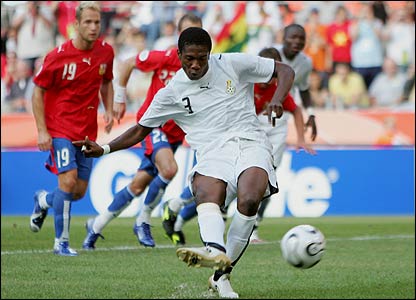 Behind Gyan, Ghana have a trio of impressive attacking midfielders. Prince Tagoe, Kwadwo Asamoah and Andre Ayew are all highly gifted individuals, but all are more comfortable as providers than goalscorers so a lot rests on Gyan’s shoulders.

One of the most notable recent additions to the squad is Portsmouth’s Kevin-Prince Boateng, who only had his application to represent Ghana accepted in May. Boateng, who had represented German at every level from under-15 to under-21, may well face his brother, German international Jerome, when the two nations face off in the final fixture of Group D.

Another note of interest; brothers Andre and Abdul Rahim Ayew are the sons of Ghana’s greatest ever player, Abedi Pele.

All in all, this blend of youthful attackers and experienced defenders may just work out better than many are anticipating.