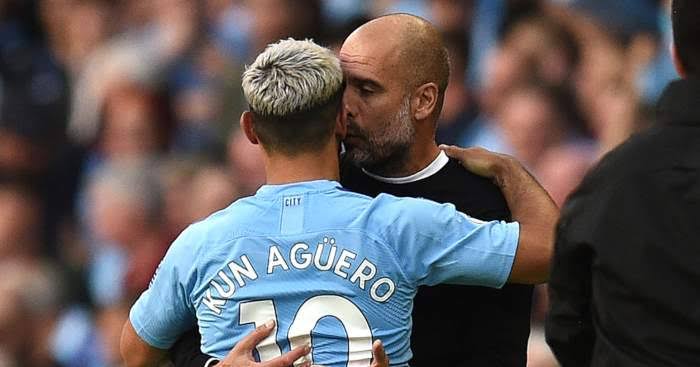 According to Sky Sports, Pep Guardiola has opened up on Sergio Aguero’s future at Manchester City, saying the forward has to earn a new contract to remain at the club.

The 32-year-old club record scorer is in the final year of his deal at City, but after serving the Citizens for so many years and consistently delivering as expected of him, the club will not be forcing him out of the door.

However, Aguero’s appearance against Arsenal was his first since June, after recovering from a knee injury, as City beat Arsenal 1-0 and the club are keen to see him return to his best, while the possibility of signing Lionel Messi from Barcelona on a free transfer is still in view.

Earlier in August, City have said they remain relaxed about Aguero’s contract situation and that of Guardiola, whose deal is also set to expire at the end of the season. Yet, the manager thinks the Argentine will want to return to his peak before thinking about a new contract.

“Sergio now has to show, like every one of us, that he deserves to continue here – keep playing well, scoring goals and winning games – and after that the club and I will decide,” Guardiola said of Aguero, who is free to speak to foreign clubs from January.

“But if he is playing in his level we don’t have any doubts that he is a player to stay until he decides because he is unique. He is important for us, our fans and everyone.

“Having Aguero on the pitch, we are better, we are safer. We missed him a lot in the important moments at the end part of last season, but now is good news for us that he is back.”

Guardiola also defended the City striker over an incident involving him and official Sian Massey-Ellis in Saturday’s match against Arsenal where the forward was pictured placing his hand over the official after awarding a throw-in to the Gunners and the conduct under scrutiny.

“Come on guys,” Guardiola said after the match. “Sergio is the nicest person I ever met in my life. Look for problems in other situations not in this one.”