Two goals in five minutes at the beginning of extra-time ended Cameroon’s CAF 2010 dream as Egypt progressed to the semi-final and kept alive their record-breaking third straight trophy attempt.

Unfortunately though the match ended amidst controversy, after Ahmed Hassan’s third goal was allowed to stand with replays clearly showing the ball had not crossed the line.

Cameroon started the match in determined fashion as they looked to end the Egyptian stranglehold on the competition and after a flurry of early corners eventually broke the deadlock.

The ball floated over from the left by Achille Emana was too strong for Hassan on the post and his weak attempt to head clear ended up in his own net.

The Indomitable Lions continued to press, but were taken by surprise when Hassan unleashed a fierce 35-yard strike that was poorly dealt with by a scampering Carlos Kameni and kicked off the turf before flying in.

The goal had arrived in the 37th minute and moments later Hassan was again in the mix when his right-sided cross was wastefully headed wide by Hosni Abd Rabou.

Emana then came close for Cameroon, seeing his low strike from outside the penalty area kept out by a scampering Essam El-Hadary and the sides were level at the break.

Egypt almost went ahead straight from the restart after a long ball by their keeper was left to bounce by Aurelien Chedjou and Emad Moteab’s attempted flicked finish was cut out by Kameni.

Emana responded for his side with a powerful 20-yard strike straight at El-Hadary, before the anonymous Samuel Eto’o finally got a shot in on goal in the 78th minute which was comfortably dealt with by the Egypt goalkeeper.

Moteab nearly won the game right at the death after he was picked out at the back post by a sweeping pass from Hassan, but the Al-Ahly forward could only find the side netting as the game entered extra-time.

Hassan Shehata’s men then wasted no time in killing off the tie going 3-1 up after 95 minutes. 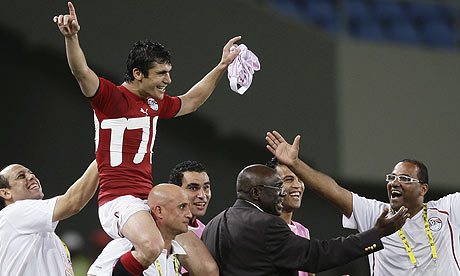 They were gifted both goals – the first when Geremi’s poor back-pass from the right was intercepted by Mohamed Gedo and tucked away with ease through the legs of Carlos Kameni two minutes after the resumption.

The second seems certain to land South African referee, Jerome Damon, in the spotlight after Hassan’s free-kick from the left was pushed onto the underside of the crossbar by the Espanyol goalkeeper and did not cross the line when it hit the ground, but was still allowed to stand much to the dismay of the Cameroon players.

It also seemed to knock the stuffing out of Paul Le Guen’s men as they failed to create any major openings in the closing 25 minutes.

To make matters worse, Chedjou was shown straight red for hauling down last-man Gedo midway through the second period of extra-time with Egypt going on to seal a historic win.