Islam Feruz: Traitor to Tommy moves from Celtic to Chelsea

It has emerged Chelsea have won the race to secure the signature of former Celtic youth start Islam Feruz, putting an end to a whirlwind of interest from Europe’s elite clubs for the youngster.

Celtic could only stand by and watch, powerless, as clubs and agents tried to cajole Feruz to their respective clubs.

Aged only 16 Islam cannot sign a professional contract, allowing him to leave for a disastrously low fee (only training compensation) a blow to both Celtic’s bank balance and their on-pitch endeavours.

Feruz’s agent Rui Alves offered fans of the Glasgow Giants an insight into the motives of his player in making the switch to the Premiership: “Islam is an ambitious kid, a lot of clubs were interested in him. We had proposals from clubs in Spain, Italy and France.

“Some clubs even approached us and said ‘we know we won’t be able to get this kid because he is such a talent’.

“We appreciate everything Celtic and Tommy Burns did for him. I have a lot of respect for Celtic. Neil Lennon is a friend of mine who I deeply admire. But it was in Islam’s heart to move to Chelsea.”

It is not uncommon for a players to move from a smaller club to a bigger more established club, Celtic themselves have often been on the receiving end of such transfers in the case of Scott Brown, Didder Agathe and Paddy McCourt, to name a few. However what separates these from the Feruz case is the fact all the players were under contract and the club had a right to refuse or accept any fee given as the saw fit.

However the thorn which will stick deepest in the side of all Celtic fans will not be the loss of earnings the club would surely have gained had they held on to the starlet, but the disrespect and lack of appreciation shown to the late Tommy Burns shown by Islam Feruz and his representatives.

Islam and his family escaped war torn Somalia in 2001, fearing for their lives after receiving intimation at the hands of armed gangs. Islam was just five years old at the time.

On his arrival in Scotland the youngster began playing at Castlemilk sport’s centre, and at the age of 10 was spotted by Celtic scout John Simpson and invited to the Parkead club.

From this point on Tommy Burns would guide the Somalian born forward, moulding him into the talent he is today and preparing him for life in the professional game. However Burns helping hand wasn’t confined to the training pitch, and when the Scottish authorities decided to send Feruz and family back to Somalia, Tommy stepped in, pleading with the government to allow the family to stay in Scotland. The government accepted Burn’s case and Islam and family were granted asylum in Scotland.

Tommy Burns has since passed away, losing his battle with skin cancer aged only 51. A tragedy felt by all in the Scottish game, he is dearly missed.

In recent years the quick forward has since featured for the national side at under 17 level and in the Tommy Burns memorial match which raised money for cancer charities. 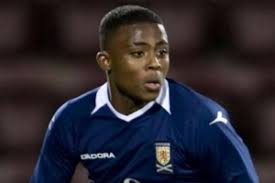 Now aged 16 the stage was set for Feruz to make the step up to the reserves and maybe even a few first team appearances. Celtic would finally see their reward in the efforts made in training the youngster and producing such a talented attacker.

Feruz has made a decision to join Premiership giants Chelsea, denying Celtic the chance to see the fruits of their labour and missing out on a real prospect for the future.

This is yet another sad example of the lack of loyalty in football and the increasing selfish minded approach taken by players. Islam has let down many people involved in the Celtic football club, but none more so than Tommy Burns.

Burns who struggled so passionately to keep him in Scotland, who overseen his development for a fragile raw talent to a player with true quality and bags of potential.

The Scottish internationalist should have at least signed professional forms next year with Celtic allowing the club some form of repayment of the debt Islam undoubtedly owes the club. Or at best stayed and established himself in the SPL in a few years gaining valuable experience and helping the club in there push for the title.

No one could rightfully blame Feruz for showing ambition and leaving Celtic in 3 or 4 years as he would probably out grow the SPL and need to move to Europe’s top leagues to fully for fill his potential. However the hasty departure and cut throat ruthlessness of his switch surely flies in the face of all Celtic and Tommy Burns did for him.

Unfortunately players like Tommy Burns are a rarity in today’s game, a man dedicated to his club and who was a literal representation of what it meant to be Celtic, a man who offered himself to Celtic as a player, a coach and a manager, and most importantly a fan.

The lack of these sentiments and the ungrateful nature of Islam’s departure for the training ground at Stamford Bridge, shown by the timing of his move are all contrary to the way in which Tommy Burns treated the club.

It is these differences which make Burns an icon and players such as Feruz merely mercenaries.