‘The Old Lady’ Are Hobbling Along to a Disappointing Season.

Juventus are regarded as one of Europe’s greats. The famous black and white stripped kit is one of the most recognisable in the whole game. ‘Juve’ have won the Champions League twice, are 27 time winners of Serie A and ‘The Old Lady’ have lifted the Europa League three times in their illustrious history. Much of their reputation has been tarnished in recent times though after match fixing scandals, as a result ‘Juve’ were demoted but won promotion back to the top tier of Italian football at the first attempt keeping many of the talismanic figures at the club including Pavel Nedved, Alessandro Del Piero and Gianluigi Buffon.

This season has been a bit of a disappointment for the Juventus fans. They were big spenders in the summer transfer window bringing in players such as Diego Ribas, Martin Cacares and Filipe Melo, fending off competition from Arsenal in doing so for the latter, adding more talent to a squad which already had bags of it. However ‘Juve’ currently sit 5th in Serie A and inconsistency has threatened their Champions League place next season.

Juventus’ European campaign has been just as disappointing as their league season; they finished third in their Champions League group which was not the most challenging. This poor European campaign and terrible start in the league meant Ciro Ferrara was sacked as manager.  Alberto Zaccheroni was chosen as Ferrara’s successor, rather than a high-profile name.

The Turin based club drew another club with a huge reputation across the World in the Europa League, Ajax.  It was most certainly one of the more glamorous ties of the round and generated a fair amount of pre-match hype in the media.

In the first leg Martin Jol’s Ajax side took the lead early on at the Amsterdam Arena after Miralem Sulejmani burst through the Juventus defence and slotted the ball through the legs of Gianluigi Buffon in the Juventus goal. Two minutes later parity was restored through Brazilian striker Amuari. After a great bit of skill from Del Piero, first to poke the ball through one Ajax defenders legs and then to play a through ball into Paolo De Ceglie who’s deep cross found Amuari un-marked at the far post. The striker made no mistake heading home from close range to draw the scores level at 1-1 and give ’Juve’ a vital away goal. Amuari headed in his second goal of the match, in the 58th minute. Once again De Ceglie and Del Piero created it, this time through Del Piero’s floating cross which Amuari won in the air ahead of Jan Verthongen and powered the ball home beyond Maarten Stekelengburg in the Ajax goal. 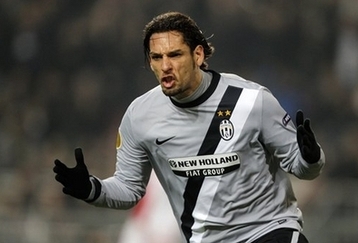 Amuari’s double had provided the lead Juventus needed to take back to Turin, if there is one thing any club doesn’t want it is an Italian side defending a lead and it proved to be enough to send ‘Juve’ through to the last 16. In a game of few chances Jan Vertonghen wasted Ajax’s best chance to pull level but Juventus held strong and went through 2-1 on aggregate after a 0-0 draw at the Stadio Olympico.

The Italian side have drawn London based club Fulham in the last 16 after Roy Hodgson’s side overcame the odds beating Ukrainian champions Shakhtar Donetsk. Juventus will go into the game as favourites but their whole season has been un-done by inconsistency and despite Alessandro Del Piero assuring the Bianconeri that his side are taking the competition seriously it may well be that a club with a history of Juventus’ will not be fully committed to Europa League.