Stepping up for a freekick within shooting range, Gareth Bale was prepared to repeat the late magic against West Ham and Southampton, but it was the clown of the season Emmanuel Adebayor who rescued Tottenham’s Champions League dream.

Andre Villas-Boas returned to Stamford Bridge for the first time since his short stint with the Blues. There were not much welcoming nor booing for the young Portuguese, as the home fans continued to show no love towards their interim manager, who again left Frank Lampard and John Terry on the bench.

Tottenham does not lack the quality to be top four. The missing puzzle is the winner’s mentality and self-belief. It was a match they could not afford to lose, but the attention to details was not there. You were destined to be punished when you could not get the basic right, as basic as deadball  defense. Oscar made sure Tottenham learn the lesson with a close range tap-in following Cahill’s squaring header. One would wonder what was in Scott Parker’s mind when the inspirational midfielder let go of Oscar at the far post.

It has been a long season for Chelsea, having competed in almost double the amount of Premier League games all season. They did not look very sharp although with Hazard, Mata and Oscar all on the field, but they remained solid at the back and showed tremendous threat with their rapid counter attacks.

With Gareth Bale surprisingly sticking on the left flank, Azpilicueta played with less adventure and together with fellow Ashley Cole, Bale and Aaron Lennon, the two main sources of threat for Tottenham were silenced. They had to dig somewhere else for a goal, and they found an unlikely hero.

Having finally earned a permanent contract at White Hart Lane following some, Adebayor has never been able to rediscover the form last season. On this important evening, he got a surprising start from AVB and he did not disappoint. Adebayor started the fast break and pulled out some of his best skills to leave Peter Cech stranded with a running curling shot. The Togo striker single-handedly found an important equaliser for Tottenham.

While their attacking talents are beyond doubt, complacency in defence has let them down in many occasions this season. Chelsea gave little space to Huddlestone and Parker all night long and it had certainly frustrated Michael Dawson and Jan Vertonghen. Once the two centrebacks attempted something out of their comfort zone, Chelsea’s opportunity came. 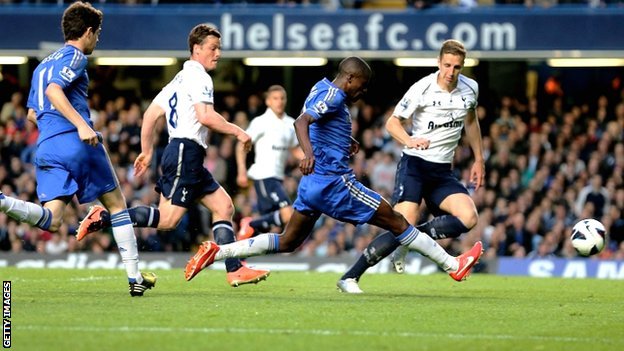 Having intercepted the pass at midfield line, the ball eventually fell to Fernando Torres, who sent a killer pass to the cutting Ramires and the Brazilian amazingly defeated Lloris with his right toe. The quick counter attack had caught Dawson napping. The Tottenham captain was too slow in closing the gap between himself and Vertonghen and left with no chance to block Ramires’ shot, however brave he had shown with a face-blocking against Hazard’s rocket shot.

Ramires brought the lead again to Chelsea, but he would be punching himself having not doubled the lead early in the second half. Another counter-attack following Tottenham’s corner, Juan Mata calmly waited for Ramires’ support, but only saw the unmarked goalscorer lost his footing in the box.

The embarrassing missed opportunity looked unlikely to haunt Chelsea, as Spurs looked in despair like a bunch of headless chickens. Just as the away fans began to moan when AVB decided to use his last sub to introduce Tom Carroll instead of Jermain Defoe, Tottenham again managed to create something out of nowhere. 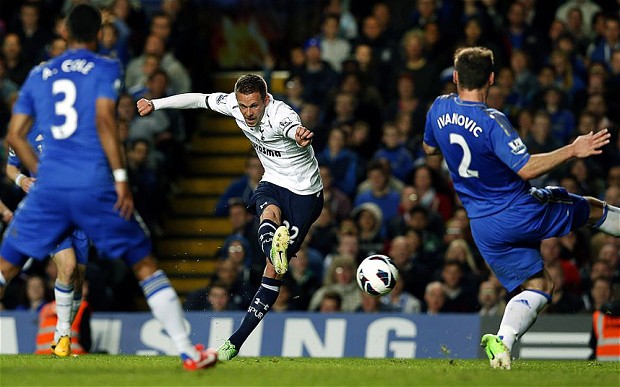 Benoit Assou-Ekotto lobbed to Adebayor in the box. The big striker skilfully flicked it back to another super sub Gylfi Sigurdsson. Should David Luiz follow his run more closely, the Icelandic would not have such amount of time in the key area. Still, Sigurdsson had a lot to do to beat Peter Cech. Once again, he found an important equaliser for Spurs.

It was as if the storyline at Upton Park was to be replayed — Sigurdsson equalised then Bale won the match, but Bale’s last minute freekick was just not special enough to beat Cech for the third time in the evening. Spurs will settle for a point which never looked like theirs, but find themselves slip to fifth, one point behind Arsenal. Nothing less than six points in the last two games would give them a chance for a place in Champions League now.