Former Fiorentina, Lazio and Inter Milan manager Roberto Mancini takes charge of his first match as the boss of Manchester City, following a typically eventful week at Eastlands. After the sacking of former incumbent Mark Hughes, my views on which can be seen here, the languid and relaxed Italian, who hopes to bring a winning mentality to City, needs a win against Stoke in order to quell the querulousness and discontent that envelops the City of Manchester Stadium at the moment.

The visitors will no doubt prove to be a difficult first challenge for Mancini, with their distinct brand of football likely to cause problems for the City defence. Stoke, in their second season in the Premier League, lie in mid-table, but are in the midst of one of their poorer runs since returning to the top flight. Without a win in their previous four matches, the Potters will have the sole aim of spoiling Mancini’s welcoming party, hoping to defend solidly and look to assert their well-documented power and strength at the other end of the field. Fortunately for City fans, the new manager already seems to have done his homework, as, when asked in his introductory press conference about the threat of Rory Delap’s infamous long throws, he suggested that Shay Given needed to catch the ball the whole time.

Hughes, who was in charge for eighteen months, has left the Blues in a fairly strong position, lying sixth in the table with a game in hand. Having been victorious in their last encounter, a rollercoaster 4-3 win against Sunderland, City will look to make it four home wins on the bounce in all competitions with a victory on Saturday. Mancini, although having no previous experience of managing in arguably the best league in the world, has plenty of know-how in the shape of assistant manager Brian Kidd, formerly Sir Alex Ferguson’s number two down the road.

In his first game in charge, Mancini faces a couple of tricky selection dilemmas, notably concerning his defence. With Joleon Lescott and Wayne Bridge both ruled out for quite some time, the Italian suffered a new blow during the week when academy product Nedum ‘The Chief’ Onuoha broke down in training and now looks set to be out until the new year. With captain Kolo Touré severely struggling to hit form, Mancini will be forced to send out a makeshift backline, not ideal at the best of times, least of all when facing Stoke, a side known for their physical style, which includes hitting a plethora of balls into our box. Belgian hardman Vincent Kompany looks sure to step into Onuoha’s void, and will partner Touré at the back, although it remains to be seen whether the latter will be entrusted with the captain’s armband.

In midfield, tricky winger Shaun Wright-Phillips is struggling with an ankle injury, so there may be an opportunity for Slovakian youngster Vladimir Weiss to step into the team, although Mancini may prefer the more conservative option of playing Stephen Ireland on the right of midfield. Nigel de Jong, one of the standout performers so far this season, is certain to return to the side following suspension, whilst Gareth Barry may be moved from central midfield to left-back, depending on Mancini’s confidence in Sylvinho. Craig Bellamy, one of Hughes’s most loyal followers, will need to show that he is committed to the Mancini cause and looks set to continue on the left, although the new manager may look to boost Robinho’s confidence by giving the Brazilian, who scored a majestic hat-trick in this fixture last year, a start. Emmanuel Adebayor, signed from Arsenal in the summer, is doubtful so Roque Santa Cruz, scorer of a brace against Sunderland, will continue alongside glamour boy Carlos Tévez. 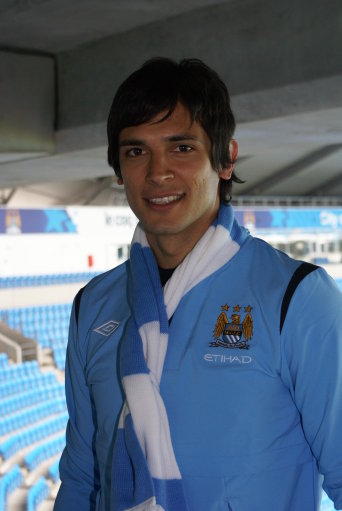 This would be the team I would play against Stoke:

Stoke also have a couple of defensive worries, with both captain Abdoulaye Faye and promising centre-back Ryan Shawcross struggling with injuries. Further up the field, they have former West Ham gambling addict Matthew Etherington in a rich vein of form, whilst striker James Beattie has been consigned to the substitute bench for the past couple of games, following his now infamous dressing room bust up with manager Tony ‘Smashing’ Pulis. Mercurial Turkish striker Tuncay, signed from Middlesbrough, provides the attacking flair, whilst Jamaican hitman Ricardo Fuller is capable of producing a goal out of the blue.

Tuncay and Beattie, the latter of whom scored against City last season, will prove to be tough opposition

The highly respected Irish goalkeeper is known for his undoubted shot-stopping ability, with his reflexes having kept City in the game on many an occasion this season. However, it is his ability to command his area, or rather, lack of it, that has attracted slight concerns of the City faithful. Small for a top level ‘keeper, Given rarely comes out to claim the ball, often putting our defence under pressure. Stoke will look to exploit his hesitancy in the form of long-throw expert Rory Delap, whose variety of flight and trajectory for his throws has confused many a defence and goalkeeper in the past. The outcome of this contest may well decide which team is happier at the end of the 90 minutes.

With City suffering an injury nightmare in defence, Kompany, who spent the majority of last season in the defensive midfield role, will, in all likelihood, be asked to fill in alongside Kolo Touré. Very powerful in the air, the Belgian international doesn’t suffer fools gladly, and he will need to live upto this billing if City are to have a chance in this match. Tuncay is a hugely talented footballer, albeit one whose Stoke career has started slowly. However on his day, the Turkish attacker can prove devastating, with his trickery and pace sure to cause problems.

Diao, a Senegalese international who has represented his country 39 times, scoring four goals in the process, is a sturdy, no-nonsense holding midfielder. He sits in front of the back four, looking to break up opposition play and set up attacks for his team. This is the area which former Manchester United striker Carlos Tévez, whose real surname is actually Martínez, paroles and the Argentinean has been scoring for fun recently, having started his City career unconvincingly. Now returning to full fitness, Tévez drops just behind the main striker, looking to create City attacks, and generally putting himself about. Diao will need to pay special attention to the striker, which may in turn leave space for other City attackers, such as Stevie Ireland.

Diao, on the right, will have the challenging task of containing Tévez

MAN CITY 2 – 1 Stoke – A tough start for the Mancini regime, but one which I expect us to overcome and run out winners by the odd goal in three with goals to be scored by Roque Santa Cruz, Carlos Tévez and James Beattie.

If possible, would you please take the time to read this superb preview of the game by renowned blogger Alec Vještica on his exemplary Stoke site.

What Does The Future Hold For Man City?
MAN CITY 2 – 0 Stoke: Perfect Start For Mancini